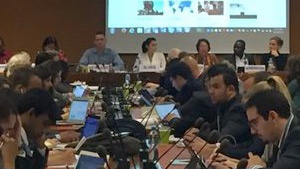 On 17 November 2015, Al-Haq convened a panel at the Librarie Arabe l’Olivier, to specifically examine the case of ‘Occupied Palestine: Corporate Complicity in Israeli Human Rights Abuses’. The panel featured papers from Al-Haq, Badil, Who Profits, Article 1 Collective and the Boycott National Committee. The panel discussed the nexus between business interests and the Israeli occupation regime, which together annex and exploit the resources of the OPT and oppress the occupied Palestinian population for their benefit.

Al-Haq examined the destruction of the fishing industry for Israel’s gas distributions network, Article 1 presented financial institutions policies and obligations to divest and withdraw from companies exploiting conflict in the OPT, Who Profits presented on Israel’s exploitation of the quarries and dairies industries and industrial ties to the occupation, Badil presented on corporate complicity in population transfer and the Boycott National Committee presented on corporate complicity in the arms industry.

Al-Haq presented in a formal side-panel 'Challenges and opportunities of a treaty to address corporate abuse of human rights' and addressed the fact that any a binding treaty must address conflict-affected areas given that they present a unique set of challenges because of the existing vulnerability of the right holders. Al-Haq underlined that such challenges and concerns are amplified in the case of occupation, where the host State cannot be relied on to regulate corporations operating in occupied territory. Therefore, a treaty must

In a formal side-event entitled ‘Enhanced due diligence in conflict-effected areas’ at the UN Forum that took place in Geneva on Wednesday 18 November in collaboration with SwissPeace, International Alert, and the Essex Business and Human Rights Project. Al-Haq discussed the abstractness of enhanced due diligence on the ground, particularly as reflected in current National Action Plans to implement the UNGPs that had been adopted already by several States including the UK and the Netherlands. In the event, Al-Haq also highlighted that in situations of conflict – particularly in the case of Palestine, greater clarity of what enhanced due diligence entails is necessary but more importantly it is necessary to ensure that our understanding of due diligence includes undertakings by States to criminalize unlawful involvement, directly or indirectly, of corporations in unlawful activity and a requirement on these corporate actors to either terminate their engagement in these situations or not to engage in the first place.

Al-Haq distributed core publications at the Al-Haq stand and highlighted the applicability of the UN Guiding Principles on Business and Human Rights in conflict affected areas. Al-Haq published and distributed a special hard copy report on the destruction of the Palestinian fishing industry,  ‘Israel’s Deadly Catch: Special Report for United Nations Business and Human Rights Forum 2015 on the Persecution of Fishermen in the Occupied Palestinian Territory’. In addition, advanced hard copies of Al-Haq’s report on oil and gas report ‘Annexing Energy: Exploiting and Preventing the Development of Oil and Gas in the Occupied Palestinian Territory’ were distributed, alongside Al-Haq’s reports and policy papers on the environment and natural resources.