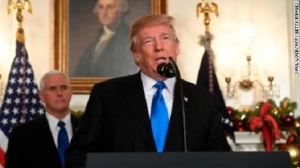 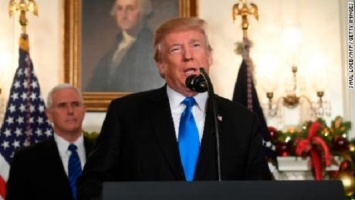 On 6 December 2017, United States President Trump announced the United States recognition of Jerusalem as Israel’s capital, and the relocation of the US embassy from Tel Aviv to Jerusalem. The recognition plays into Israel’s unlawful claim to a united Jerusalem as the capital of Israel. Notably, Israel has unlawfully annexed both East and West Jerusalem. Critically, East Jerusalem forms part of the occupied State of Palestine, and Israel as temporary belligerent occupier, does not have sovereign rights over any part of the occupied territory. It must be emphasized that the US recognition is a direct and deliberate infringement of both Israel’s and the United States international obligations under numerous binding United Nations Security Council resolutions.

When Israel annexed East Jerusalem in 1967, Security Council Resolution 267 warned “all legislative and administrative measures and actions taken by Israel which purport to alter the status of Jerusalem…are invalid and cannot change that status.” Notably, Security Council Resolution 478 from 1980 called on all states “not to recognize the ‘basic law’ and such other actions by Israel that, as a result of this law, seek to alter the character and status of Jerusalem” and that “those States that have established diplomatic missions at Jerusalem to withdraw such missions from the Holy City.” Furthermore, the recognition of Israel’s unlawful annexation of East Jerusalem amounts to complicity in an unlawful settlement enterprise, which was condemned by Security Council Resolution 2334 in 2016. Notably the resolution calls on “all States…to distinguish, in their relevant dealings, between the territory of the State of Israel and the territories occupied since 1967.”

Trump’s decision to flagrantly violate United Nations Security Council resolutions places the entire international legal system at risk and threatens the reciprocal maintenance of peace and security. His decision further highlights his and his staff’s broader pro-Israel agenda, which rejects the most basic principles of international law. This agenda includes actions taken by the Trump transition team, including by current advisor to the US President, Jared Kushner, to thwart Resolution 2334. Kushner was reportedly co-director of a foundation that funded Israel’s unlawful settlements, which may amount to potential complicity in war crimes.1 Similarly, both President Trump and US Ambassador to Israel David Friedman have allegedly made donations for the financing of Israel’s unlawful settlement enterprise, in violation of international criminal law, for which there may be individual criminal liability.2

Importantly, the US recognition of Israel’s claim to a united Jerusalem as its capital comes in the wake of a number of alarming extralegal bills before the Knesset. There, Israel aims to alter its Basic Law to provide for the alteration of the Jerusalem municipality and to absorb a number of Israeli settlements into what Israel colloquially terms, “the Greater Jerusalem” area.

In the face of these unlawful acts against Jerusalem and the Palestinian people, it is imperative that the Palestinian Liberation Organization immediately and permanently end peace negotiations with United States President Trump, who is positioning the United States as a transgressor of international law. In light of the deliberate sabotage of the status of East Jerusalem, Al-Haq calls on the disbandment of the Palestinian Authority’s security coordination and all political coordination with Israel, which is effectively entrenching the occupation and facilitating Israel’s colonial agenda.

Al-Haq calls on the United Nations General Assembly to convene an emergency session to condemn Trump’s declaration, and reassert the unlawfulness of Israel’s annexation and alteration of the status of East Jerusalem. Al-Haq further urgently calls for the General Assembly to refer the question of Israel’s annexation, colonization and apartheid for an advisory opinion to the International Court of Justice.

Al-Haq calls on the High Contracting Parties to the Geneva Conventions to convene a meeting to address the serious breaches by Israel of the Fourth Geneva Convention and the breach of the United States as a high contracting party of its duty to respect and ensure respect for the Convention in all circumstances.

The prohibition of the acquisition of territory by force is a fundamental principle of international law with the character of jus cogens. Al-Haq requests that all mechanisms of the United Nations be utilized to prevent the assimilation of East Jerusalem into Israel, and end Israel’s occupation. The recognition of Jerusalem as the capital of Israel violates the inalienable Palestinian right to self-determination and permanent sovereignty. In particular, Al-Haq calls on the United Nations Security Council to immediately place sanctions on Israel. Should the Security Council be obstructed by a likely United States veto, Al-Haq calls on the United Nations General Assembly and regional organisations including the European Union, African Union, and Arab League to use all mechanisms at their disposal to ensure that sanctions are placed on Israel. In doing so, Al-Haq calls on the General Assembly to trigger a United Nations General Assembly Resolution 377 A (V) should the Security Council fail to act.

In light of the United States actions, it is untenable that the United States continue as a broker in peace negotiations. Article 25 of the Charter of the United Nations requires that States “agree to accept and carry out the decisions of the Security Council in accordance with the present Charter” which includes a commitment to uphold the basic principles of international law, such as not acquiring territory through use of force. It is clear that the United States is neither a neutral nor impartial arbitrator for peace and it is apparent that the current administration has deep and complicit ties to Israel’s settler colonial regime. It is now time for the European Union to take the lead in peace negotiations and end its policy of waiting on the back-foot for the United States position. Failure by the international community to intervene with an adequate response flouts the object and purpose of the Charter of the United Nations “to take effective collective measures for the prevention and removal of threats to the peace, and for the suppression of acts of aggression or other breaches of the peace.” The consequences of such a failure are grave, and risk escalating hostilities throughout the occupied State of Palestine, which will have serious regional implications.