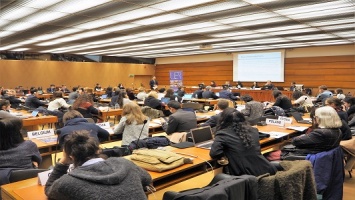 On 13 December 2017, Al-Haq participated in the Universal Periodic Review (UPR) Pre-sessions ahead of the 29th UPR Working Group session on Israel in January 2018. The Pre-sessions offer Civil Society Organizations and National Human Rights Institutions the opportunity to brief Permanent Missions on the human rights situation in the States under Review.

During the Pre-session on Israel, Al-Haq delivered a joint statement with Community Action Centre (Al-Quds University) and the Cairo Institute for Human Rights Studies (CIHRS), addressing the following issues: the right to self-determination and permanent sovereignty over natural resources; discriminatory residency laws and planning and zoning regime in Jerusalem; collective punishment; and the ongoing closure of the Gaza Strip. The statement further addressed Israel’s continued and deliberate disregard for international law, the lack of accountability, accompanied by the international community’s inaction – all of which have contributed to a culture of impunity for Israel, allowing for the continuation of human rights violations across the occupied Palestinian territory.

It should be noted that Al-Haq had submitted joint and individual submissions1 in June 2017 to the UPR Working Group, focusing on the aforementioned issues as well as Israel’s policies of forcibly transferring Palestinians from East Jerusalem, family unification, and punitive residency revocations. In addition, numerous recommendations were proposed to Member States in light of Israel’s upcoming UPR, including but not limited to:

- Cease the construction of settlements and withdraw all settlers from the occupied Palestinian territory, in line with the Human Rights Committee concluding observations on the fourth periodic report of Israel, and halt business operations that finance, service or trade with Israeli settlements.

- Immediately cease the practice of residency revocation and reinstate the residencies of all Palestinians that have lost their residency since 1967, including residencies revoked on punitive basis and grant spouses of Palestinian residents of Jerusalem residency status.

- End the collective punishment of Palestinians in the occupied Palestinian territory, including policies of punitive residency revocation and the withholding of Palestinian bodies.

- Dismantle and cease construction of the Annexation Wall in the occupied Palestinian territory, in line with the International Court of Justice Advisory Opinion on the Wall in 2004.

- Fulfill its obligations under Article 49 of the Fourth Geneva Convention and end policies aimed at the direct and indirect forcible transfer of protected persons from occupied territory, particularly in Area C and Jerusalem.

- End the prolonged closure of the Gaza Strip and lift all movement restrictions, which prohibit the free flow of people and goods by land and sea, to and from the Gaza Strip.

Furthermore, an emphasis was made on the need for Israel to abide by its obligations under international human rights and humanitarian law; for Member States to actively ensure that Israel upholds its duties as an occupying power; and that Israel ends the occupation.

1The joint submission was made by the Community Action Centre (Al-Quds University), the Society of St. Yves, Al-Haq and the Cairo Institute for Human Rights Studies (CIHRS).