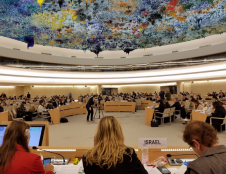 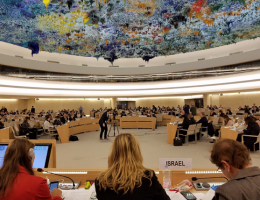 On 23 January 2018, Israel underwent its 3rd Universal Periodic Review (UPR) by the Human Rights Council in Geneva. The UPR is a process providing for the periodic review of UN Member States’ human rights records, which includes an onus on the reviewed State to present steps that they have taken to implement the recommendations received in previous reviews, in addition to highlighting human rights developments in their jurisdiction

During the UPR session on 23 January, Israel spoke highly of its commitment to the UPR process and human rights standards. It further spoke of its accomplishments in this field, such as issues relevant to women and victims of sexual abuse. However, Israel made inadequate reference to its human rights obligation in the Occupied Palestinian Territory (OPT) over which it exercises jurisdiction as Occupying Power. In fact, Israel continues to deliberately disregard recommendations made in the previous two UPR sessions in relation to its obligations in the OPT. In this respect, it should be noted that Israel has obligations inherent in the laws of armed conflict, including the law of occupation, as well as international human rights law, which are all applicable to occupied territory.

During the review, Member States provided numerous recommendations to Israel regarding the OPT. States recommended that Israel end its occupation, cease demolitions of Palestinian property, and the unlawful transfer of Palestinians, especially from Jerusalem and Area C. Furthermore, States have called on Israel to respect international law, halt the construction of settlements in the West Bank, including in Jerusalem, and to dismantle already-existing ones, with one recommendation made by the Kingdom of Bahrain to halt businesses in settlements. In addition, States have recommended that Israel stop measures of land appropriation and confiscation in the West Bank, including those implemented through legislative means. Recommendations were made for Israel to allow Palestinians freedom of movement within the OPT, access to Palestinian natural resources, including land and water, access to religious sites, health care, and other services. More specifically, recommendations were made for Israel to lift the closure of the Gaza Strip and to lift restrictions caused by the Annexation Wall in the West Bank.

Moreover, several States called on Israel to stop unilateral measures, including those aiming at changing the status of Jerusalem through its legislative measures and policies. Recommendations were made for Israel to stop its residency revocation measures and house demolitions against Palestinians in Jerusalem. In particular, Jordan recommended Israel to preserve the City’s status and cancel measures taken through its Parliament to unify Jerusalem. States further expressed their concern with Israel’s excessive use of force. Whereas France recommended Israel to combat impunity by holding perpetrators (whether members of its forces or Israeli settlers) of human rights violations accountable. Besides, recommendations were made for Israel to stop its policy of collective punishment against Palestinians, including punitive demolitions and residency revocations, such as Germany’s recommendation.

Throughout the review, many States seemed to be of high concern with regards to Israel’s detention of children and minors, also recommended to limit its policy of administrative detention against minors specifically and at large. States further denounced the shrinking space for civil society created by Israel and called for the protection of human rights defenders and the creation of a safe environment for them to function in where they can exercise their freedom of speech and association. Also, several recommendations were made for Israel to cooperate with UN bodies and mechanisms, including Special Procedures, as well as to ratify more international conventions and additional protocols, including the Optional Protocol to the International Covenant on Economic, Social and Cultural Rights and the Second Optional Protocol to the International Covenant on Civil and Political Rights, aiming at the abolition of the death penalty. Meanwhile, States, including Montenegro and Timor-Leste, recommended Israel to ratify the Rome Statute of the International Criminal Court.

In December 2017, Pre-sessions for civil society organisations were held in Geneva ahead of Israel’s UPR, in which Al-Haq participated, along with the Cairo Institute for Human Rights Studies (CIHRS) and Community Action Centre (Al-Quds University). Al-Haq made recommendations to Member States to call on Israel to lift restrictions on freedom of movement, including restrictions on access to, utilizing and developing land and sea resources, including water and gas among others; to dismantle the settlements and remove Israeli settlers from the OPT as recommended by the Human Rights Committee in 2014; end the unlawful transfer of the Palestinian population, especially in Area C and Jerusalem; cease the destruction and demolition of private and public property; cease the practice of residency revocation; revoke the 1980 Basic Law on Jerusalem; end collective punishment; end the prolonged closure of the Gaza Strip; and ensure territorial contiguity across occupied Palestine.

Al-Haq welcomes the recommendations made by Member States on 23 January 2018 which aim towards upholding internationally recognized human rights standards for the occupied Palestinian population. Al-Haq calls on the international community to hold Israel accountable for its violations of international human rights and humanitarian law and end immediately its culture of impunity. States must take immediate action to ensure Israel’s implementation of the recommendations, to end Israel’s prolonged occupation, and call for an effective remedy and reparations for the Palestinian population at home and in the Diaspora.