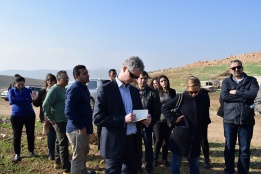 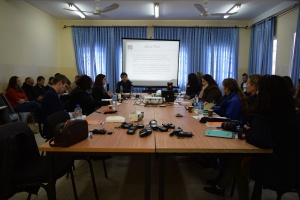 The event included two presentations of Al-Haq’s latest reports Settling Area C: The Jordan Valley Exposed, and its side report Unpacking Gender in Coercive Environments: The Case of the Jordan Valley. Mr. Shawan Jabarin, General Director of Al-Haq, stated that the reports “critically examine the historical and legal contexts of human rights violations and annexation policies in the Jordan Valley”. Specifically, the side report “unveils the gendered social and legal dimensions of coercive environments and the extent to which they contribute to intensifying the vulnerabilities of women and girls in the area”, Mr. Jabarin added.

The first report, Settling Area C: The Jordan Valley Exposed, examines the different legal mechanisms that Israel uses to appropriate land in the Jordan Valley to establish permanent settlements, applying both a legal and historical lens. It further documents the experiences of Palestinians affected by the coercive environments which Israel creates in terms of exploiting water resources, restricting movement and access, and the application of a discriminatory planning policy, resulting in mass house demolitions – ultimately leading to the forcible transfer and relocation of families and communities therein.

The side report, Unpacking Gender in Coercive Environments: The Case of the Jordan Valley assesses the gendered dimensions of Israel’s violations of human rights across the Jordan Valley by analyzing the means through which Israeli practices intensify the vulnerabilities of Palestinian women and girls in the region. More specifically, the report demonstrates how coercive environments created by Israel undermine the rights of Palestinian women and girls.

The presentations were followed by the screening of Sumoud, a documentary produced by Al-Haq, which captures the reality of Israel’s creation of coercive environments in Al-Hadidiya, in the northern Jordan Valley. The documentary tells the story of a family from Al-Hadidiya and their experience with Israel’s discriminatory policy of administrative house demolitions. It focuses on the experience of Sumoud, the youngest member of the family, and her perception on the impacts of home demolitions. The documentary reveals Israel’s discriminatory policies and practices and their debilitating interference with the everyday lives of Palestinian families residing in the Jordan Valley.

At the event, Al-Haq expressed its sincere gratitude to the community members of the Jordan Valley, and affirmed that their cooperation was integral to the success and completion of the two studies and the production of the documentary. The launch event was concluded with a field visit to the small village of Al-Mak’houl, located in the northern part of the Jordan Valley. Attendees were able to gain first hand insight into the dire situation of the village and its surrounding areas, and the unbearable living conditions experienced by residents there. Al-Haq’s field researcher in the Jordan Valley provided participants with information on Israel’s discriminatory policies including planning and zoning policies, mass home demolitions, and movement and access restrictions intended to create coercive environments for the purpose of forcibly transferring the Palestinian population, and permanently annexing the area. A representative from the village of Al-Hadidiya delivered testimonies that reflected the impacts of such policies on residents of the Jordan Valley.

Illustrating the continuous harassment and intimidation residents are subjected to, Al-Haq’s field visit was interrupted by the Israeli Occupation Forces (IOF) who demanded information on the purpose of the group’s visit to the community. The IOF claimed that the group’s presence in the area may be illegal and that the group should have acquired permission from the Israeli Military Forces prior to conducting the visit. Members of the visiting group affirmed that that Al-Mak’houl is home to Palestinian communities and that the area is not declared as a closed military zone by Israel. Members of the IOF proceeded with provoking and intimidating the group by taking pictures of the visiting delegation.

Throughout the event and the field visit, Al-Haq emphasized that Israel’s prolonged belligerent occupation of Palestinian territory, and its violations of international human rights law and international humanitarian law entail its responsibility as a State and as an occupying power, and trigger third-party responsibility. As such, the international community must take action to prevent the Israeli authorities from illegally exercising sovereign rights over the Jordan Valley and end its policies leading to creating coercive environments with the intent of forcibly transferring Palestinians from the area and permanently annexing the land. 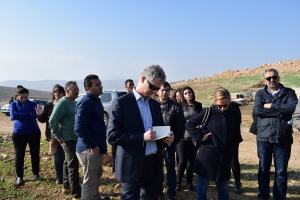