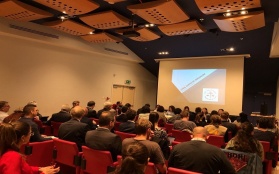 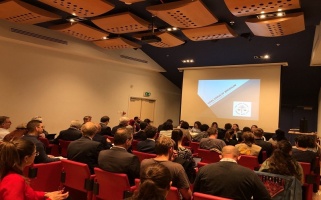 On Wednesday 7 March 2018, Al-Haq, along with Jerusalem Legal Aid and Human Rights Center (JLAC), the Civic Coalition for Palestinian Rights in Jerusalem (CCPRJ), al-Quds University's Community Action Center (CAC), and Society of St. Yves, presented a briefing on the current legal status of Jerusalem to diplomatic missions in the Yabous Cultural Center in Jerusalem.

In the opening statement, Society of St. Yves provided an introduction on the legal status of the city of Jerusalem since UN General Assembly Resolution 181, which recommended the partition of Palestine and the creation of a corpus separatum regime for Jerusalem. Society of St. Yves followed its opening statement with a presentation titled "Legal Status of Jerusalem: The Land, the People" outlining the deterioration of the situation in Jerusalem over the past three months, since US President Trump's recognition of the city as Israel's capital, as well as the general situation in the city, as a result of Israel's discriminatory demographic policies.

Jerusalem Legal Aid and Human Rights Center (JLAC), followed with a presentation titled "Forcible Transfer and the Amendments on the Laws (Shaked's Plan)”, which analyzed Israeli MK Ayelet Shaked's plan for creating an "administrative court", which aims to expand Israeli legal jurisdiction to the occupied Palestinian territory (OPT) by transferring jurisdiction in the West Bank and East Jerusalem from the High Court of Justice (HCJ) to a newly created administrative court. JLAC underscored its concerns in relation to the Israeli High Court of Justice and the Israeli Judiciary as a whole, and  highlighted the gravity of Shaked's plan to impose Israeli law in the West Bank by creating the new administrative court, as an annexationist measure.

JLAC pointed out that the new administrative court would cover areas such as planning and construction, including land ownership and demolitions, requests under the freedom of information law of access to information and freedom of movement in and to the West Bank. Although Palestinians would still be able to appeal to the HCJ, after hearings at the administrative court, the cost of appealing is unaffordable to most Palestinians. JLAC clarified that the plan is another attempt to legally annex the West Bank and strip the West Bank of its special status, as expressed by Shaked, who has declared that the new court aims to "normalize” the situation of the West Bank and “end discrimination against settlers". JLAC further clarified that the administrative court would not consider points of international law, especially humanitarian law.

From its side, Al-Haq offered a presentation on the "Alteration of the Legal status of Jerusalem: A Legal Analysis of Bills and Legislation” in which it examined the expansion of the Jerusalem municipality in 1967, and the legal annexation of East Jerusalem by Israel in 1980 through the amendment to Israel’s  Basic Law. It noted that annexationist measures since 1967, have been condemned under United Nations General Assembly and Security Council resolutions. Al-Haq, then comprehensively detailed the series of bills currently tabled before the Knesset, including the "Greater Jerusalem bill", aiming to annex settlement blocs in the East Jerusalem periphery, including industrial zones, and the "Jerusalem and its Daughters bill", which intends to incorporate settlement blocs to Jerusalem, while creating sub municipalities for three Palestinian neighborhoods behind the wall. In addition, the "Jerusalem Capital of Israel bill" requires a super majority Knesset vote for any alteration of the legal status of Jerusalem under the Basic Law, making final status negotiations more difficult. Al-Haq outlined concerns over the "Law for the Rescue of Jerusalem as a Jewish and Democratic Capital City”, which aimed to reduce Palestinian presence in Jerusalem and freeze Israeli citizenship procedures for Palestinian Jerusalemites. The latter is no longer on the table, but clearly indicates a tendency in the Israeli law-making process to radically alter the demography of East Jerusalem and force the transfer of Palestinians out of the City. In a different vein, in February 2018, Israel already adopted a higher education law, effectively extending its law on higher education and jurisdiction to settlement universities, which amounts to an annexationist measure.

In its intervention titled "‘Security’ as Justification for Forcible Transfer”, Al-Quds University's Community Action Center (CAC) presented the case of Manwa Qunbar, the mother of Fadi Qunbar, whose family was the target of Israel’s collective punishment and persecutory measures after her son was alleged to have carried out an attack. Her permanent residency was revoked and family unification permits for several of her family members were revoked too. CAC then presented the case of Nadia Abu Jamal, the relative of another alleged attacker. Nadia was forcibly moved out of Jerusalem and her house punitively demolished by the Israeli authorities.

Community Action Center pointed out that in 2015 the Israeli Security Cabinet provided further grounds to revoke residency on a punitive basis, in line with the Israeli demographic goals in Jerusalem. In addition, CAC presented the case of four Palestinian parliamentarians whose residency revocations were considered by the Israeli Supreme Court on 13 December 2017, for breach of allegiance to the State of Israel. Despite the fact that the High Court of Justice acknowledged the current illegality of revocations, it granted the Knesset six months to issue a law legalizing residency revocations for breach of allegiance to the State of Israel. On 7 March 2018, the Israeli Parliament passed an amendment to the Entry into Israel Law which allows the Israeli Minister of Interior to revoke the permanent residency status from Palestinian residents of Jerusalem, who the Minister deems have ‘breached allegiance’ to Israel. Furthermore, CAC explained that five new bills are currently being discussed at the Knesset, dealing with residency revocation on punitive grounds, despite being clear collective punishment measures and reprisals against family members.

In conclusion, the human rights organizations identified these and other measures of displacement, including demolitions, psychological warfare and coercive environments, as Israeli policies that contribute to a clear plan to eliminate Palestinian presence in Jerusalem. The five organizations presented conclusions and recommendations on the situation in Jerusalem, and the obligations of international community and Third States in this regard.

For more information, read the following documents presented and distributed during the brief:
Related Subjects
Over 280 ESCR-Net Members Call for Stronger Treaty to Regulate Corporate Activities
Al-Haq’s Engagement with the UN Committee on Economic, Social and Cultural Rights for Israel’s Fourth Periodic Review
Al-Haq Welcomes Launch of World Health Organization Report on the Right to Health in the Occupied Palestinian Territory