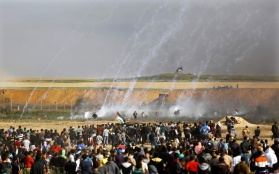 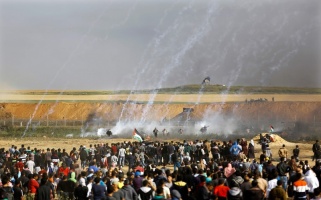 The “Great Return March” protests in commemoration of the 42nd Land Day, are expected to continue until 15 May 2018, which will mark the 70th anniversary of the mass expulsion of Palestinian refugees from their homes, cities, and villages of origin in 1948. Some 65.3 per cent of Palestinians in the Gaza Strip are 1948 refugees and their descendants, who were forcibly expelled from their homes in Mandatory Palestine in 1948, have been systematically denied their right of return by Israel ever since.

Last Friday, 30 March, in a unilateral and planned escalation of violence, the Israeli Occupying Forces (IOF) killed 17 Palestinians, while two protesters succumbed to their wounds during the week that followed, bringing the total of Palestinians killed in the Gaza Strip last Friday to 18.[1] In addition to the 18 killed, Fares Mahmoud Al-Raqab, 26, succumbed to his injuries on 2 April 2018, while Thaer Muhammad Rabi’a, 30, who had sustained live bullet shots to his thighs on 30 March, succumbed to injuries on 6 April 2018 at approximately 6:00 am.

During the second Friday of protests, nine Palestinians were killed and over 795 were injured as protests were once again violently suppressed by the IOF. At dawn, Mujahid Nabeel Al-Khudari, 23, was killed by an Israeli airstrike near Al-Zaitoun neighbourhood, east of Gaza city. Mujahid’s body was only retrieved at 10:00 am on the same day. Later that day, eight Palestinians were killed as a direct result of the IOF’s excessive use of lethal force, including the shooting of live ammunition at peaceful Palestinian protesters in five different locations along Israel’s eastern fence surrounding the Gaza Strip.

In Khuza’a, in the eastern Khan Younis Governorate, the IOF killed Usama Khamis Qdeih, 39, with a live bullet in the head. Also in Khuza’a, a Palestinian photojournalist, Yasser Abd Al-Rahman Murtaja, 31, was killed by a live bullet in the stomach at approximately 1:30 pm while covering the protests for the Palestinian Ain Media agency. Yasser was holding a camera and wearing a distinctive press vest when he was shot from a short distance. Meanwhile, in the east of Al-Breij refugee camp, the IOF killed Hamza Eid Abd Al-‘Aal, 30, Ibrahim Ziyad Al-‘Irr, 20, and Sudqi Taleb Abu Atwi, 45, all of whom were shot with live bullets in the head, while peacefully protesting. In Rafah, in the southern Gaza Strip, Muhammad Sa’id Saleh, 33, was killed after being shot by several live bullets in the chest and stomach while protesting. Two minors were also killed; Alaa’ Addin Al-Zamili, 16, who was shot with live bullets, east of Rafah, and Hussein Muhammad Madi, 14, from Gaza city, who was shot in the heart with a live bullet. Hussein was declared dead upon arrival at Al-Shifa Hospital at around 3:30 pm on 6 April, three days before what would have been his 14th birthday.

By the end of Friday 6 April 2018, at least 795 Palestinians were injured as a result of the IOF’s use of excessive force, including lethal force, against protected Palestinian civilians protesting near the Gaza Strip’s eastern fence. Among the injured protesters, 77 were children, and 483 were injured by live bullets.  Others were injured by rubber bullets and tear gas inhalation.

Israel as belligerent occupant is obliged to ensure the human rights of the protected civilian population, for which it is responsible, including the right to life, health, and freedom of assembly.[2] Under the framework of belligerent occupation, a law enforcement paradigm applies to civilian assemblies, governed by human rights law, and regulated by the Code of Conduct for Law Enforcement Officials and the Basic Principles on the Use of Force and Firearms by Law Enforcement Officials. In this vein, Israel is constrained under Article 6 of the ICCPR to use no more force than is absolutely necessary and to ensure that “no one shall be arbitrarily deprived of his life.” Notably, force should only be employed in limited and exceptional circumstances in order to protect life. In this respect, the shooting of live bullets at peaceful protestors, when the Israeli military or others lives are not at risk, breaches the primary necessity principle implicit in the right to life.

On 6 April, the IOF once again intentionally resorted to excessive, including lethal, force against peaceful Palestinian protesters legitimately demanding an end to Israel’s unlawful blockade and closure of the Gaza Strip, amounting to collective punishment,[3] and the realisation of their inalienable right of return.[4] The IOF indiscriminately shot live fire at the crowd of Palestinian protesters, killing eight, including two minors, Alaa’ Al-Zamili, 16, and Hussein Madi, 14, while injuring 483 Palestinians by live bullets. All of the peaceful demonstrators who were shot and killed by the IOF were shot in their upper body parts, such as their heads, necks, chests, and stomachs, which illustrates intent and a shoot-to-kill policy.

In this case, the excessive resort to lethal force is in clear violation of the UN Basic Principles on the Use of Force and Firearms by Law Enforcement Officials, by which the IOF are bound in the Occupied Palestinian Territory (OPT), including in the Gaza Strip. The Basic Principles prohibit the use of lethal force unless “strictly unavoidable in order to protect life.”[5] Furthermore, Israel’s incursion into Palestine’s airspace and airstrike breaches Palestinian sovereignty and resulted in the unlawful and unnecessary killing of Mujahid Al-Khudari. No considerations of necessity, proportionality or precaution in attack stem from the IOF’s violent attacks against Palestinian protesters in the Gaza Strip for the second Friday in a row.[6]

Furthermore, the killing of civilian journalist Yasser Muratja, by a bullet to his stomach while covering the protests, dressed in flack jacket with the word “PRESS” written on it with bold letters, distinguishing himself from other persons as a media member, amounts to grave violations and constitutes an attack on the freedom of press and denial of freedom of expression. Article 79 of the First Additional Protocol and customary international law,[7] requires that journalists engaged in dangerous professional missions of armed conflict are always considered civilians and must be protected as such.

Last week, the United Nations human rights experts on extrajudicial, summary or arbitrary executions, on the right to adequate housing, on the promotion and protection of the right to freedom of opinion and expression, and on the situation of human rights in the OPT, condemned the IOF’s excessive use of force leading to the killing of Palestinians, “expressing concern at the apparent disregard for the lives of Palestinian protesters. They noted that wilful killing or serious injury of the protected population amounts to grave breaches of the Fourth Geneva Convention.”[8] As such, the killings of Palestinian protesters in the Gaza Strip since 30 March 2018 may fall within the purview of the International Criminal Court’s preliminary examination into the situation in Palestine since 13 June 2014, as potential grave breaches of the Fourth Geneva Convention[9] and war crimes under the Rome Statute of the International Criminal Court.[10]

Lastly, Al-Haq warns against Israel’s grave escalations in the Gaza Strip as Palestinians continue to stand up for their rights, and calls on the international community to urgently and immediately intervene to ensure the protection of the occupied Palestinian population in the Gaza Strip, and the rest of the OPT.

[5] Principle 9, UN Basic Principles on the Use of Force and Firearms by Law Enforcement Officials (1990).