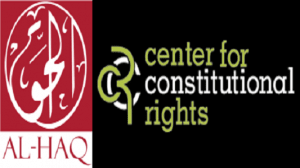 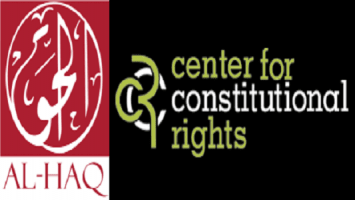 Ramallah, 2 May 2018 – Al-Haq’s General Director, Shawan Jabarin, condemned today the Israeli authorities’ denial to grant the entry of Vincent Warren, Executive Director of the United States (US)-based Center for Constitutional Rights (CCR), and Katherine Franke, Chair of CCR’s board and Sulzbacher Professor of Law, Gender, and Sexuality Studies at Columbia University on Sunday, 29 April 2018, after 14 hours of detention and interrogation at Ben Gurion International Airport, preventing them from carrying out their planned trip to witness “the history of systematic displacement and institutional racism” against Palestinians as well as the work of human rights defenders.

Expressing Al-Haq’s deep condemnation of the treatment Israeli authorities accorded to “the representatives of one of the most influential and credible North American human rights organizations”, Shawan Jabarin described the deportation of Vincent Warren and Katherine Franke as “an indicator of the repressive nature of Israel’s prolonged occupation and the Israeli occupying authorities’ systematic obstruction of the work of organizations and individuals active in the defence of Palestinians’ human rights, justice, and international law.”

“Denying entry to CCR’s Vincent Warren and Katherine Franke reflects a wider Israeli policy of systematically obstructing the monitoring and documentation of Israel’s human rights violations against Palestinians, in an attempt to maintain the long-standing impunity that the Israeli occupying authorities are allowed to enjoy,” added Shawan Jabarin, stressing that “this is a message to the US government on how Israel treats US citizens engaged in the defence of human rights, at the same time as the US continues to support and condone Israel’s unlawful policies against Palestinians.”

Vincent Warren and Katherine Franke are part of a team of human rights defenders working on domestic US justice issues who planned to meet community leaders and human rights defenders in the Occupied Palestinian Territory (OPT) to conduct a closer observation of the human rights situation in the OPT. Following her deportation to the US, Katherine Franke said that her interrogation in Tel Aviv “made it clear that I was banned from entering Israel because of my work in the U.S. on behalf of Palestinian rights.” She added that “No government is immune from criticism for its human rights record. The abusive treatment Vince Warren and I received at Ben Gurion airport ironically illustrates how the state of Israel refuses to respect the political and civil rights of its own citizens, of Palestinians, and of human rights defenders globally.”

Vincent Warren further highlighted that “our trip sought to explore the intersection of Black and Brown people’s experiences in the US with the situation of Palestinians, and Israel could not have made that connection clearer.” Al-Haq recalls that Israel’s racist practices against the Palestinian people are widely reflective of the systemic discrimination experienced by people of colour and indigenous peoples around the world, including in North America.

The entry denial of CCR’s Vincent Warren and Katherine Franke comes as Israel continues to suppress the Great Return March in an attempt to silence Palestinians’ legitimate demands for an end to the Israeli-imposed closure of the Gaza Strip and occupation of the OPT at large, while denying the realisation of the right of the Palestinian people to self-determination, which includes the right of refugees to return to their homes, cities, and villages of origin, from which they were forcibly displaced in 1948. As we approach the seventieth commemoration of the Nakba on 15 May 2018, Israel’s violations against the Palestinian people must be continuously subjected to the scrutiny of the outside world, in an effort to end Israel’s impunity once and for all.