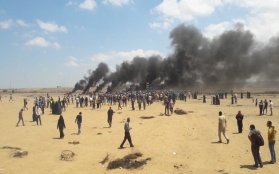 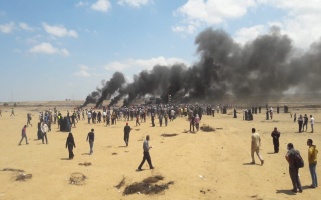 The eve of the seventieth anniversary of the Nakba marked the opening of the United States (US) embassy in Jerusalem, unlawfully relocated from Tel Aviv following the 6 December 2017 announcement by US President Trump to recognize Jerusalem as Israel’s capital. On Monday, 14 May 2018, Israel’s annexation of Jerusalem was entrenched and endorsed by the relocation of the US embassy to Jerusalem, in violation of Article 2(4) of the Charter of the United Nations on the prohibition of annexation, a general principle of international law and in breach of the Israel’s obligations as Occupying Power under Article 47 of the Fourth Geneva Convention to protect the occupied Palestinian population against any measures “by any annexation by the latter of the whole or part of the occupied territory”.

The relocation of the US embassy coincided with the Great Return March in the Gaza Strip, which started in commemoration of Land Day on 30 March 2018, to realise Palestinian refugees’ right of return and culminating on the 70th anniversary of the Nakba on 15 May 2018.

Israeli snipers from the Israel Occupying Forces (IOF) perched at the partitioning fence in the Gaza Strip, which Israel has erected to maintain its unlawful 10-year closure and 50-year prolonged occupation of the Gaza Strip, to fragment the territorial contiguity of the Occupied Palestinian Territory (OPT) by economically, socially, and culturally crippling the protected Palestinian population therein, today resorted to unnecessary, disproportionate, and unlawful use of force, including lethal force, against the protected Palestinian population. Al-Haq documented the killings of 59 Palestinians, including 43 civilians, of which seven were children and one disabled man. The latter, Fadi Hassan Salman Abu Salmi, 30, whose two legs were amputated, was killed by a live bullet to the chest in East of Abasan town, east of Khan Younis. Al-Haq documented 1,861 injuries, including 314 children and 88 women, among them 1,286 injured by live fire, of which 70 cases were described as critical.

The killings represent an egregious and manifest violation of the right to life under Article 6 of the International Convention on Civil and Political Rights (ICCPR), and amount to a continued policy by the State of Israel to systematically repress all dissent, including peaceful protests and assemblies, by resort to force and lethal force, against unarmed Palestinian civilians. Notably, the policing of assemblies is governed under a law enforcement paradigm and does not meet the threshold of active conflict. Accordingly, the IOF must apply international human rights law and only resort to force as a last resort and then, use no more force than is absolutely necessary in self-defence and in defending the lives of others. As the Israeli army spokesperson has previously maintained, the IOF “know where every bullet landed”[1] and today that their “troops are operating in accordance with standard procedures”.[2] The patterns of killings, amounting to 42 throughout the last seven weeks of protests, and 59 on Monday, 14 May, and to date totalling 101, are directly linked and emanate from Israel’s territorial expansion, illustrated in its encroaching annexation of Jerusalem, and accelerated colonization of the OPT, in violation of international law.

As Israel continues to deliberately and recklessly violate international law,as in the past seventy years, with impunity, it is time for urgent international action to maintain regional peace and security. Al-Haq reiterates its call: