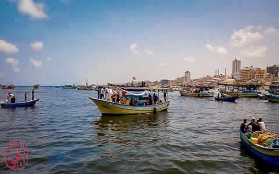 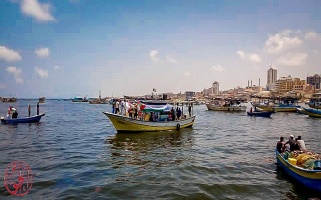 As part of its unlawful closure and blockade on the Gaza Strip, Israel intercepted Gaza’s Freedom boat, which left at 12:25 on Tuesday, 29 May 2018, heading towards Cyprus with 17 Palestinians on board, including patients and injured Palestinians from Gaza’s Great Return March, in a peaceful attempt to lift the unlawful 11-year Israeli closure, and to facilitate travel for medical treatment outside of Gaza. The Israeli occupying forces’ navy intercepted the Freedom boat around 4:00 pm at some 14 nautical miles off Gaza’s shore, with four Israeli warships encircling it for almost an hour, reportedly firing warning shots, before intercepting and capturing the boat.

Israel’s naval forces then forcibly directed the Freedom flotilla to the port of Asdod, arbitrarily arresting all 17 Palestinians on board, 14 of whom, including patients and students, were released at approximately 12:30 am, on Wednesday, 30 May 2018, at Beit Hanoun “Erez” checkpoint in the northern Gaza Strip. At 10:10 am on Wednesday morning, the Israeli occupying authorities further released Raed Muhammad Deeb, an injured passenger, and Ahmad Muhammad Al-‘Amoudi, the captain’s assistant, while Suheil Muhammad Al-‘Amoudi, the captain of the Freedom boat remains in detention as of midday on Wednesday, 30 May, in unknown conditions.[1]

Al-Haq addressed an urgent appeal yesterday to the United Nations Secretary-General and the United Nations High Commissioner for Human Rights, as Gaza’s Freedom boat was being surrounded by Israeli warships and contact with the passengers and crew members was lost.

Al-Haq called on the United Nations officials to ensure that Israel’s naval forces are prevented from opening fire on the flotilla, noting that “any resort to force, including lethal force, against the boat’s passengers by the Israeli occupying forces is unlawful, unnecessary, and disproportionate, in violation of international human rights law on the use of force and firearms by law enforcement officials, and may lead to the commission of war crimes, giving rise to individual criminal responsibility prosecutable at the International Criminal Court.”

At around 5:00 pm, Al-Haq’s field researchers reported that the Israeli naval forces had captured the boat and that all 17 crew members and passengers, including patients and wounded persons, were arbitrarily arrested and taken to Asdod, where they were held for hours before 14 of them were released at 12:30 am and another two were released the next morning.

In a joint allegation letter and urgent action request, the Palestinian Human Rights Organizations Council (PHROC) highlighted that “the Israeli occupying authorities were aware that Palestinian patients and injured persons were aboard the ‘Freedom Boat’ when they intercepted and seized it”. PHROC called upon the relevant United Nations Special Rapporteurs “to urgently impress upon the Israeli authorities the need to immediately release Suheil Muhammad Al-‘Amoudi, the captain of the Freedom Boat, which was launched as a symbolic gesture towards bringing an end to Israel’s prolonged closure and blockade of the Gaza Strip.”

The Freedom boat carried 17 Palestinians on board, including seven patients, among them a cancer patient, one patient-companion, five activists, including students, and four Palestinian crew members. Passengers included Palestinians in need of urgent medical treatment, including Palestinians injured during the Great Return March, which was launched on 30 March 2018 and has now been extended to 5 June, when Palestinians will mark 51 years of Israel’s ongoing occupation.

For nine weeks in the Gaza Strip, Palestinians have protested Israel’s unlawful closure and demanded the realization of Palestinian refugees’ right of return to their homes and property, in their villages and cities of origin, as mandated by international law. Since 30 March 2018, 129 Palestinians have been killed by the Israeli occupying forces in the Gaza Strip, including 96 during peaceful Great Return March protests, in acts that may amount to war crimes of wilful killing and wilfully causing great suffering or serious injury to body or health.[2]