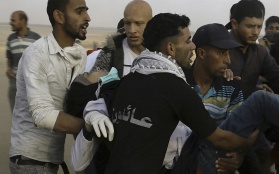 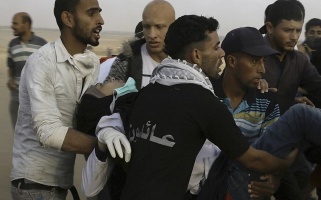 On June 1, 2018, at approximately 6:45 pm, Razan Al-Najjar, 21, a volunteer paramedic with the Palestinian Medical Relief Society (PMRS) was shot in the chest by a live bullet fired by the Israel Occupying Force. At the time, Razan was on duty providing medical aid to injured Palestinians, at a distance of about 100 meters from the barbed wire fence, east of Khuza’a, east of Khan Younis. Footage released by the Palestinian Health Ministry shows al-Najjar as part of a group of paramedics approaching the fence, clearly distinguishable wearing medics white coats, with their hands raised in the air.[1]

She was transferred by ambulance to the European Gaza Hospital in Khan Younis, where she was pronounced dead at approximately 7:00 pm.[2] Since the Great Return March started on 30 March 2018, Al-Haq has documented the killing of 135 Palestinians and the injuring and maiming of thousands of Palestinians who were exercising their right to peacefully assemble, calling for the right of refugees to return on the 70th anniversary of the Nakba, the lifting of the siege and the right to self-determination which includes permanent sovereignty over natural and national resources.

Israel’s targeting and killing of Razan Al-Najjar, represents a serious violation of the Geneva Conventions and a deliberate attack against protected civilian health workers. Although Israel opened a preliminary military examination into the death of Razan al-Najjar,  the examination found that the soldiers had opened fire at other demonstrators, not directly at al-Najjar.[3] The IOF stated that “during an initial examination of the incident that took place on June 1st, 2018, in which a 22-year-old Palestinian woman was killed, it was found that a small number of bullets were fired during the incident, and that no shots were deliberately or directly aimed towards her”.[4] The IOF further stated that the "examination is ongoing” and that “the incident will be examined by the General Staff Fact Finding Assessment Mechanism, and the findings passed to the Military Advocate General".[5]

The hastily concluded preliminary examination highlights Israel’s inability to conduct an independent, effective and impartial investigation into alleged war crimes. The General Staff Fact Finding Assessment Mechanism conducts examinations of “exceptional incidents”. A recent report of the Israeli State Comptroller criticized the “efficiency and speed of the Mechanism's work, both with respect to the collection of the findings and the documentation of the information collected”.

Furthermore, the Military Advocate General (MAG) is neither an independent nor impartial adjudicative mechanism.[6] The main oversite authority of the IOF is the Military Advocate General “MAG” Corps., which consists of lawyers that are responsible for the enforcement of the law and the provision of legal advice to all military authorities[7]. The MAG is guided by Israel’s attorney general,[8] and only commanders within the MAG Corps. are part of the legal chain of command.[9]  When engaged in fact-finding, the MAG conducts interviews with IOF members, which all IOF members are legally bound to co-operate with.[10] The MAG Corps. regularly reviews complaints and other information that may suggest IOF misconduct but also offers advice to the army.[11] This dual role has been heavily criticized by the United Nations Committee of Experts who concluded in 2010 that:

“the dual role of the Military Advocate General to provide legal advice to IDF with respect to the planning and execution of “Operation Cast Lead” and to conduct all prosecutions of alleged misconduct by IDF soldiers during the operations in Gaza raises a conflict of interest, given the Fact-Finding Mission’s allegation that those who designed, planned, ordered and oversaw the operation were complicit in IHL and IHRL violations. This bears on whether the military advocate general can be truly impartial – and, equally important, be seen to be truly impartial – in investigating these serious allegations”.[12]

Because the investigative authority is centralized in the MAG, there is an institutional lack of independence and impartiality -  at no point in the process is any decision made by a non-Israeli military affiliated entity. The 2015 reform providing for an administrative appeal process to the Attorney General, in practice only operates in exceptional cases, meaning that there is little to no oversight of the MAG.[13] Should the MAG find that the information is sufficiently concrete to merit bringing charges, MAG prosecutors may file an indictment with the Israeli Military Courts.[14]

The Israeli military effectively operates with impunity. Between 2005 and 2009, out of 800 submitted complaints of war crimes, only 49 investigations led to indictments. [15]  Because the IOF can operate without fear of legal repercussions the IOF is emboldened to open fire and targets clearly identifiable paramedics without fear of legal consequences. In 2015, the United Nations Commission of Inquiry on Gaza concluded:

“impunity prevails across the board for violations of international humanitarian and international human rights law allegedly committed by Israeli forces, whether it be in the context of active hostilities in Gaza, or killing, torture or ill treatment in the West Bank. Israel must break with its lamentable track record in holding wrongdoers accountable, not only as a means to secure justice for victims but also to ensure the necessary guarantees for non-repetition”.[16]

Israel’s hastily conducted preliminary investigation into the IOF’s targeting and killing of Razan Al-Najjar is neither transparent or credible. It is further evidence of the policy of the State of Israel to shield perpetrators of atrocity crimes. In this vein, Attorney Gilad Noam of the Department of Special International Affairs at Israel’s Ministry of Justice has noted “we know that there is a stormy political and constitutional debate surrounding the issue of the independence of the [Israeli] legal system”.[17] Given Israel’s systematic shielding of Israeli soldiers through sham investigative mechanisms and failure to hold perpetrators of international crimes to account, Al-Haq calls on the Prosecutor of the International Criminal Court to immediately open an investigation into the Situation of Palestine.

[6] Mechanisms of Review and Supervision of Law Enforcement Agencies with Regard to Alleged Cases of Excessive Use of Force and Ill Treatment, available at: http://www.justice.gov.il/Units/YeutzVehakika/InternationalLaw/MainDocs1/Mechanisms.pdf

[13] Orna Ben-Naftali, Michael Sfard, Hedi Viterbo, The ABC of the OPT: A Legal Lexicon of the Israeli Control over the Occupied Palestinian Territory (Cambridge University Press, 2018)194

[14] Shielded from Accountability: Israel’s Unwillingness to Investigate and Prosecute International Crimes. FIDH issue No 572a, 09/2011. https://www.fidh.org/IMG/pdf/report_justice_israel-final.pdf

[15] Shielded from Accountability: Israel’s Unwillingness to Investigate and Prosecute International Crimes. FIDH issue No 572a, 09/2011. https://www.fidh.org/IMG/pdf/report_justice_israel-final.pdf

[17] MK Livni: “Independence of the legal system is the legal bullet proof vest of IDF soldiers” (17 May 2018) available at: https://www.knesset.gov.il/spokesman/eng/PR_eng.asp?PRID=13879