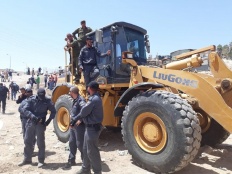 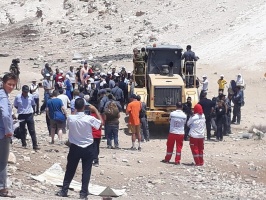 Today, 4 July 2018, the Israeli Occupying Forces (IOF) is preparing for the destruction of the entire Khan al-Ahmar community and forcibly displacing the protected occupied community, on the outskirts of East Jerusalem in the occupied Palestinian territory (OPT). Since early morning, a bulldozer has arrived at the Abu Al-Hilwa area of Khan al-Ahmar, along with tens of police, private forces, and soldiers, who have blocked gathering protestors. A bulldozer dug and cleared the road into the village, in preparation for the demolition of houses and all infrastructures there. Israeli police have communicated to the local residents that they will need to get trucks tomorrow morning to remove their belongings from their homes. The demolition of the houses is expected to take place thereafter, whereupon the 180 residents of Khan al-Ahmar will be forcibly transferred to the Al-Jabal area in Khirbet Um Al-Jamal in Abu Dis. Al-Haq recorded a police officer telling the residents of Khan al-Ahmar, “we don’t intend to use force… I know forcing you out of your houses is hard … but we are enforcing the law … tomorrow morning we’ll come and work here so don’t obstruct us … we are enforcing the law of Israel State.”[1]

In 2009, the demolition of the community was first ordered by the commander of the IOF. Between 2015 and 2017, Al-Haq documented the demolition of 35 structures, including 31 houses, leading to the displacement of 205 individuals, including 127 children in Khan al-Ahmar. Since then, the military commander issued military order 1797 providing for the demolition of all remaining structures in Khan al-Ahmar and forcing the displacement of the entire community.[2] In May 2018, the Israeli High Court of Justice upheld the forcible transfer of the community stating: “as the State has declared its willingness to conduct an honest dialogue with the residents of the campus, in order to practically arrange the eviction and their relocation to West Jahalain. We should hope that this shall be done.”[3]

The destruction of private property and the forcible transfer of the community is being orchestrated militarily to implement Israel’s E1 master plan (Plan No. 420/4) for the area, which was approved in 1999.[4] To implement the E-1 plan, Israel is destroying Palestinian villages and removing Palestinian communities and transferring in Israeli settlers into the area, and has outlined three detailed plans for residential settlement construction proposing 4,000 residential units and ten hotels.[5] This will effectively annex the territory to Israel. In 2018, Al-Haq documented the destruction of 33 structures, including 28 houses, 4 animal sheds and one school in the EI area, forcing the displacement of 147 Palestinians, including 77 children. 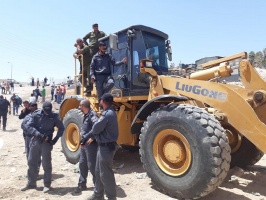 Clearly there is a State policy to force the transfer of the community to expand East Jerusalem to implement the “E1” plan, orchestrated by military order 1797, and ensured by Israel’s highest Court, effectively meaning that all organs of State are involved in the commission of crimes against humanity in the OPT. The destruction of private property in the absence of military necessity is a violation of Article 46 of the Hague Regulations and a war crime prosecutable at the International Criminal Court. Further, the forcible transfer of the protected Palestinian population from their lands and the transfer in of Israeli settlers amounts to a violation of Article 49 of the Fourth Geneva Convention, a grave breach of the Geneva Conventions, a war crime and crime against humanity prosecutable at the International Criminal Court.

On 28 May 2018, Al-Haq submitted an Urgent Appeal calling on the United Nations Special Rapporteur on Adequate Housing to immediately intervene to prevent the State of Israel from carrying out any further demolitions in Khan al-Ahmar; to refrain from any forcible transfer of any resident from Khan al-Ahmar to any other location; and to call on the State of Israel to comply with its international human rights and humanitarian law obligations in the OPT. On 31 May, the Spokesperson for European Union External Action warned against Israel’s planned demolition of Khan al-Ahmar village and accelerated settlement expansion with construction of 2,000 new settlement units across the West Bank, stating: “In line with our long-standing position on Israel’s settlement policy, illegal under international law, and actions taken in that context, such as forced transfers, evictions, demolitions and confiscations of homes, the EU expects the Israeli authorities to reconsider and reverse these decisions.”[6]

Despite these calls and condemnations, the international community has failed to halt the execution of Israel’s planned destructions of property and forcible transfer amounting to war crimes and crimes against humanity. Al-Haq calls on the international community to urgently intervene to stop the ongoing commission of internationally recognised crimes in the OPT. Al-Haq urges third States to comply with their obligations to respect and ensure respect for the humanitarian rights enshrined in the Fourth Geneva Convention.[7]

Al-Haq calls on the European Union and the international community to intervene immediately to economically sanction Israel, reminding them of their responsibility to protect civilian populations from the commission of war crimes and crimes against humanity.[8] This includes resort to all available mechanisms for the maintenance of international peace and security. In this regard, Al-Haq calls on the Member States of the United Nations Security Council to use all necessary means, to intervene and halt Israel’s crimes against humanity and war crimes in the OPT.

[1] Video documentation on file with Al-Haq.

[2] UN Officials Visit Khan al-Ahmar and Call for Respect for International Law, UN OFF. FOR THE COORDINATION OF HUMANITARIAN AFF.(Apr. 18, 2018),https://www.ochaopt.org/content/un-officials-visit-khan-al-ahmar-and-callrespect-international-law.

[4] B’Tselem, “The E1 plan and its implications for human rights in the West Bank”, available at, https://www.btselem.org/settlements/20121202_e1_human_rights_ramifications

[6] European Union External Action, Statement by the Spokesperson on the latest settlement announcement by the Israeli authorities as well as the intended demolition of the Khan Al-Ahmar community, (31 May 2018) https://eeas.europa.eu/headquarters/headquarters-Homepage/45670/statement-spokesperson-latest-settlement-announcement-israeli-authorities-well-intended_en [7] Article 1, Fourth Geneva Convention (1949) [8] A/RES/60/1 (24 October 2005) 60/1. 2005 World Summit Outcome, 30