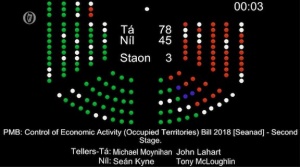 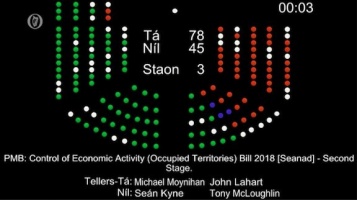 On 25 January 2019, The Control of Economic Activity (Occupied Territories) Bill 2018 passed the second stage vote in the lower house of the Irish parliament by 78 votes in favor and 45 against. Al-Haq welcomes the introduction of the Bill into Dáil Éireann by Niall Collins, TD (Fianna Fáil) who has been instrumental in forging new ground in ensuring that Ireland complies with its third State obligations to respect and to ensure respect for international humanitarian law in occupied territory. Al-Haq wishes to thank in particular, Niall Collins TD and Senator Frances Black for their leadership and continued support of the Bill, alongside Fianna Fáil, Sinn Féin, Labour, Social Democrats, The Green Party, People Before Profit and Independents, who voted for the Bill and including those independents in partnership with the government who abstained to allow for the passage of the Bill to the third voting stage.

The Bill proscribes a criminal penalty for the import or sale of goods or services into Ireland produced settlements which operate in violation of international law. As such, the objective of the Bill is “to give effect to the State’s obligations arising under the Fourth Geneva Convention relative to the Protection of Civilian Persons in Time of War” (Control Economic Activity Bill 2018).

It must be noted that the Occupied Territories Bill is supported by Adeleh Coalition, an umbrella group of sixty unions and labour organisations in the occupied Palestinian territory, representing every industry in Palestine including inter alia, for example, the Private Health Sector Workers Union, the Pharmaceutical Industry Workers Union, New Labour Union Federation, Financial Sector Workers Union, The National Society of Democracy and Law and the Union of Social Workers and the Union of Agricultural Committees. This overwhelming support from every segment of Palestinian civil society, underlines the commitment of the Palestinian population to securing their international human rights through constitutional means. It further highlights how the Palestinian unions vehemently disregard spurious arguments against the Bill, including the proposition that illegal settlements provide employment opportunities to workers, who are in reality routinely exploited by the discriminatory application of labour laws.

In light of the cross party, broad based Palestinian civil society support, Al-Haq calls on Fine Gael to support the Occupied Territories Bill. By upholding its international law obligations and incorporating these obligations into domestic law, Ireland can show real and meaningful leadership in ensuring the maintenance of international peace in the Middle East. Al-Haq further warns against impediments to the implementation of the Bill which has widespread domestic support in Ireland, through the use of a ‘money message’.

Al-Haq urges continued support for the initiative of independent Senator Frances Black, who originally put forward the Bill and reiterates its gratitude to all the 78 Deputies that voted in favor during the second stage vote at Dáil Éireann.