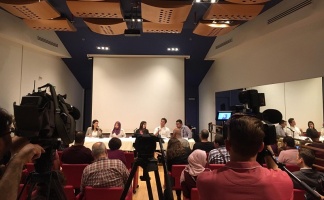 On Monday, 13 May 2019, Al-Haq, the Community Action Center (Al-Quds University), and Amnesty International held a joint press conference at Yabous Cultural Centre in Jerusalem warning against the imminent deportation of Palestinian photojournalist Mustafa Al-Nadir Al-Kharouf, 32, from Jerusalem. The organisations made calls for immediate action to prevent Mustafa Al-Kharouf’s deportation, to ensure the Israeli occupying authorities release him from arbitrary detention, and to ensure he is granted permanent residency status in East Jerusalem.

During the press conference, Mustafa Al-Kharouf's wife, Tamam Nizar Nofal, 27, recalled that her husband has been detained by the Israeli occupying authorities for over 100 days now in Givon prison, on the basis of his work as a photojournalist with the Turkish Anadolu Agency. She deplored the detention conditions in which her husband is being kept and the pressure imposed upon him by Israel's prison authorities, leading to the rapid deterioration in his mental state, including as a result of repeated attempts to coerce Mustafa into giving consent for his deportation to Jordan. Tamam Nofal emphasized that her family has no intention of leaving their home in Jerusalem, and that they await a positive outcome of Mustafa's court proceedings in addition to intervention by the diplomatic community to ensure her husband's immediate release.

Al-Haq's field researcher in Jerusalem, Asala Abu Khdeir, placed Israel's denial to grant Mustafa Al-Kharouf permanent residency status within the wider context of Israel's systematic attempts to alter the character and demographic composition of the city, in favour of an Israeli-Jewish majority. She highlighted Israel's obligations, as Occupying Power, and stressed that, should Mustafa's deportation from Jerusalem be carried out, this would constitute unlawful forcible transfer, a grave breach of the Fourth Geneva Convention, which may amount to a war crime or crime against humanity. Accordingly, she reaffirmed the responsibility of third States, under Common Article 1 to the Geneva Conventions of 1949, to ensure respect for international humanitarian law in the OPT.

Amnesty International's Deputy Regional Director for the Middle East and North Africa region, Saleh Hijzai, added that the case of Mustafa Al-Kharouf forms part of an entrenched and systematic policy and institutionalised discrimination against Palestinians. He noted that Mustafa Al-Kharouf continues to be arbitrarily detained on the basis of a secret file, in violation of fair trial standards, and based on photographs Mustafa has taken as part of his work as a photojournalist, violating his right to freedom of expression and media freedoms. In addition, he highlighted the violations of Mustafa and his family members' rights to family life and Mustafa's daughter's rights under the Convention on the Rights of the Child.

Munir Nusseibah, director of the Community Action Center (Al-Quds University), further added that Mustafa Al-Kharouf is the victim of a series of Israeli policies in Jerusalem, including the Israeli-imposed 'centre of life' policy, which required Mustafa's father to reactive his permanent residency status when he returned to East Jerusalem with his family in 1999, in addition to Israel's restrictions on child registration, which prevented Mustafa from receiving permanent residency status through his father both as a child and after he turned 18, and restrictions on family unification, which was denied to Mustafa on so-called 'security' grounds, on the basis of his journalistic work. Munir Nusseibah recalled that over 14,000 residencies of Jerusalemite Palestinians have been revoked by the Israeli occupying authorities since 1967, as part of a systematic policy to reduce Palestinian presence in the city.

At the close of the press conference, the organisers reaffirmed the calls made in the joint urgent appeal sent, on 26 April 2019, by Al-Haq, Addameer, Jerusalem Legal Aid and Human Rights Center (JLAC), Community Action Center (Al-Quds University), Civic Coalition for Palestinian Rights in Jerusalem, and Amnesty International to the United Nations Special Procedures, warning against Mustafa Al-Kharouf's imminent deportation by the Israeli occupying authorities, reiterating their calls for Mustafa's immediate release, and emphasizing the urgent need for action to ensure Mustafa Al-Kharouf is not deported and is guaranteed his right to a permanent residency in East Jerusalem.