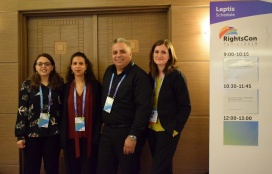 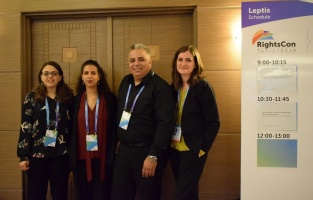 Between 11 and 14 June 2019, Al-Haq participated at RightsCon 2019, the 8th Annual Summit on Human Rights in the Digital Age, which was held in Tunis, Tunisia, and was attended by nearly three thousand participants from around the world, representing civil society groups, international organisations, and multinational corporations working in the field of digital rights. Al-Haq’s delegation to RightsCon 2019 included legal researcher Rania Muhareb and Dr. Isam Abdeen, Head of Local and Regional Advocacy at Al-Haq, who participated on Thursday, 13 June 2019, in a session titled “The Palestinian Cause for Digital Freedom” organised by 7amleh – The Arab Center for the Advancement of Social Media.

During the session, Ms. Muhareb presented on the widespread and systematic violations committed by Israel, the Occupying Power, in the Occupied Palestinian Territory (OPT), and stressed the importance of human rights work and the monitoring and documentation of serious human rights abuses in Palestine, including violations of the rights to freedom of expression and association. In her presentation, she highlighted the continued shrinking space for civil society organisations and human rights defenders in Palestine, including the targeting of their work by the Israeli occupying authorities, in violation of Palestinians’ rights to freedom of expression and association. Ms. Muhareb further highlighted the attacks and smear campaign targeting Al-Haq and its staff, led by semi-governmental Israeli organisations and the Israeli Government through its Ministry of Strategic Affairs. She noted that these attacks have increased in particular since 2015, when the State of Palestine ratified the Rome Statute of the International Criminal Court, thereby activating the Court’s jurisdiction over international crimes committed in the OPT. As such, she argued that the smear campaign against Al-Haq coincided with the organisation’s work in seeking accountability for suspected war crimes and crimes against humanity committed against Palestinians.

Accordingly, Ms. Muhareb stressed the importance of continued efforts in seeking accountability in the Palestinian context, referring to the pivotal role played by local, regional, and international civil society groups in challenging Israel’s pervasive culture of impunity in an effort to realise the inalienable rights of the Palestinian people, including the right of Palestinian refugees to return to their homes and property, and the right of Palestinians to self-determination, as mandated by international law. She stressed that only through meaningful accountability for widespread and systematic abuses will Palestinians’ fundamental rights finally be realised, including in the digital sphere. Critically, she highlighted the urgent need to implement without any further delay the recommendations of the United Nations (UN) Commission of Inquiry on the Great Return March, with emphasis on the Commission’s recommendation for Israel to lift its unlawful closure of the Gaza Strip with immediate effect. In addition, she called for support for the release of the UN database on businesses active in or with Israeli settlements in the OPT as a tool to promote enhanced due diligence for corporations operating in the Palestinian context.

Addressing the local Palestinian context, Dr. Abdeen presented on digital rights and cybercrimes in the West Bank and the Gaza Strip. In his presentation, he examined the general human rights situation in the OPT, noting that the Palestinian context is unique and requires particular attention due to the nature and multiplicity of entities violating human rights, including digital rights, amongst them Israel, as Occupying Power, the Palestinian Authority in the West Bank, the Hamas authorities in the Gaza Strip, and corporations such as Facebook, which recently took down dozens of Palestinian journalists’, activists’, and human rights defenders’ accounts, in violation of their right to freedom of expression and international standards and best practices. Moreover, Dr. Abdeen highlighted the violations committed against journalists, human rights defenders, and activists through the Law by Decree on Cybercrimes in the West Bank and the Law on the Misuse of Technology in the Gaza Strip, also noting the absence to date of a law guaranteeing the right of access to information and the latest developments in this regard, while affirming Al-Haq and partners’ efforts in promoting the right to freedom of expression in its broadest sense.

At the end of his presentation, Dr. Abdeen provided a number of key recommendations on the situation in Palestine to RightsCon participants, stressing the importance of disseminating these at the regional level, in light of widespread digital rights violations in the Arab region. His recommendations included: creating an observatory to monitor violations of media freedoms and of the rights to freedom of opinion and expression locally and regionally, thereby contributing to the establishment of a professional database for digital rights violations in accordance with international standards; appointing a professional legal team to work locally and regionally to defend journalists, human rights defenders, and activists who are subject to attacks as a result of their professional work and to resort to strategic litigation to defend the rights to freedom of opinion and expression and media freedoms; appointing an advocacy team specialized in the management of campaigns at the local and regional levels aimed at countering these violations and at supporting the legal team, especially in the field of strategic litigation; and institutionalizing the performance of both legal (strategic litigation) and advocacy (campaigning) teams through regular brainstorming sessions organised at the local and regional levels.

During the session, and in line with Al-Haq’s joint work with 7amleh – The Arab Center for the Advancement of Social Media, Alison Carmel, 7amleh’s international relations coordinator, discussed Israel’s various and systematic violations of Palestinians’ digital rights and the rights to freedom of opinion and expression. In particular, she highlighted the role of Israel’s Ministry of Strategic Affairs and the cybercrimes unit created by the Israeli Government in monitoring and carrying out surveillance of Palestinians’ activity on social media platforms, in breach of their rights to freedom of expression and to privacy. In addition, Ms. Carmel examined cases of arbitrary arrests and detentions carried out by Israel on the basis of Palestinians’ social media content, while she further highlighted Israel’s disinformation campaigns online, including those targeting Palestinians’ freedom of expression and calls for the boycott of illegal Israeli settlement goods as so-called “economic threats” to Israel.

In particular, Ms. Carmel discussed a number of bills presented at the Israeli Parliament (the Knesset), which if adopted would violate Palestinians’ digital rights and media freedoms, including the proposed bill to prohibit the photographing of the Israeli occupying forces during their military activity in the OPT, which was introduced within the context of the ongoing Great Return March demonstrations in the occupied the Gaza Strip and during which Israeli snipers were filmed shooting unarmed Palestinian civilian protesters. She further highlighted Israel’s 2018 Facebook bill and the grave implications such a piece of legislation would have on Palestinians’ digital rights and freedom of expression online. Finally, she discussed 7amleh’s recent report on hate speech against Palestinians on social media platforms, including calls by Israelis for “death to the Arabs”, amongst other forms of hate speech and incitement to racial discrimination online. Critically, Ms. Carmel noted that Facebook has adopted a discriminatory content moderation policy, which disproportionately targets Palestinians, while Israeli hate speech is inadequately addressed.

At the margins of RightsCon 2019 in Tunis, Al-Haq and 7amleh further participated in a number of important meetings, including with Facebook representatives to discuss Facebook’s content moderation policy affecting Palestinians’ digital rights. Amongst the issues raised by Al-Haq and 7amleh were concerns as to Israel’s 2018 Facebook bill to increase Israeli Government control over content moderation on Facebook. In this regard, the two organisations outlined Facebook’s legal obligations to uphold Palestinians’ digital rights and the rights to freedom of expression and to privacy more generally, while they further highlighted violations committed against Palestinians, amongst them prosecution by the Israeli occupying authorities for social media activity, in addition to Facebook’s discriminatory content moderation policy. In particular, the two organisations referred to Facebook’s recent take-down of dozens of Palestinian activists’, human rights defenders’, and journalists’ accounts in violation of international standards and best practices for companies in relation to human rights. As such, the meeting served to clarify Facebook’s policy and appeal process in relation to content moderation and the importance of their conformity with international law, while it also served as an opportunity to highlight the need for continued coordination and cooperation in this regard, as agreed during the meeting.

In addition, Al-Haq and 7amleh organized a special meeting at the margins of RightsCon 2019 with the UN Special Rapporteur on the promotion and protection of the right to freedom of opinion and expression, Mr. David Kaye, during which some of the outcomes of the meetings with Facebook were discussed as well as Israel’s surveillance and restrictions of Palestinians’ digital rights. In this context, Mr. Kaye emphasized the importance of holding corporations accountable for complicity in human rights abuses, including for violations of the right to freedom of expression, which forms part of his mandate. In addition, Al-Haq provided an overview of the human rights situation in the West Bank and the Gaza Strip before and after the accession by the State of Palestine to the international treaties. In particular, looking at the right to freedom of expression, Al-Haq outlined developments in relation to the Law by Decree on Cybercrimes in the West Bank and the Law on the Misuse of Technology in the Gaza Strip, also stressing the continued absence of a law guaranteeing the right of access to information. Based on the meeting, Al-Haq agreed to send a submission to the Special Rapporteur on the right to freedom of expression, on cybercrimes, and on the right of access to information at the legislative, policy, or practical levels, for follow-up by the Special Rapporteur with Palestinian officials in accordance with his mandate and responsibilities.

Throughout RightsCon 2019, Al-Haq and 7amleh welcomed cooperation and stressed the importance of networking with various human rights groups working at the local, regional, and international levels, while the organisations emphasized the need for continued cooperation, joint work, and strategic advocacy campaigns to improve the human rights situation in Palestine and in particular to promote respect for Palestinians’ digital rights.