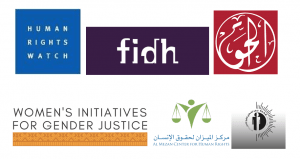 The Statement highlighted that the ICC relies on “State cooperation and civil society as essential actors in delivering on its mandate to hold perpetrators of the most serious crimes accountable for their crimes.” It further added that “when the ICC, and international justice more generally, was at risk due to threats aimed at deterring cooperation with the court, civil society firmly stood up for the Court. Protecting civic space is, thus, crucial for ensuring that the system can work for the benefit of the victims.”

The organisations’ statement welcomed the adoption by the Bureau of the Assembly of “a strategy and annex of a compilation of good practices to counter any threat or attack against the Court, its officials and those cooperating with it.” It also urged that the strategy “should be put into effect when threats or attacks, including against civil society and human rights defenders are identified.”

The statement asserted that “those who cooperate with” the court are under attack, including the six Palestinian civil society organizations, which the Israeli apartheid regime outlawed and raided their office last year. It further stressed that several of these organisations have been cooperating with the ICC and submitting information to the Office of the Prosecutor about alleged crimes committed by Israeli occupying forces and apartheid regime.

The statement reminded the ASP that Al-Haq and nearly 200 organizations have sent a letter to the President of the ASP urging for the implement of the new strategy including by:

Video of the ASP President, Ms. Silvia Fernandez de Gurmendi addressing the concerns raised by the civil society at the ASP closing can be seen here.