Al-Haq is pleased to invite you to its side event held at the 21st Session of the Assembly of States Parties to the Rome Statute of the International Criminal Court (ICC), entitled “Countering the Global Crackdown on Human Rights Defenders and Civil Society: What Role for the ICC and States Parties?”

Long before the inception of the ICC, civil society and human rights defenders (HRDs) have been a cornerstone of the international criminal justice system. From advocating for the Court’s very establishment and advancing the universality of its Statute, to supporting the Court’s mandate, victim participation, and community outreach – the ICC has often relied on the work carried out by civil society. The Assembly of States Parties (ASP) has long recognized the critical role of civil society and Human Right Defenders (HRDs) in the Rome Statute system, and has repeatedly expressed its appreciation of the “invaluable assistance that has been provided by civil society to the Court.”1

Despite their key role in the Rome Statute system, civil society organisations and HRDs face increasing threats for their work with the Court and in their fight to bring justice to victims. This is particularly the case in situations under investigation or preliminary examination by the Office of the Prosecutor. HRDs carry a significant burden when pursuing their work and suffer most directly – and often personally – from threats, physical attacks, sanctions, and smear and intimidation campaigns from actors attempting to challenge to Court’s fight against impunity. The ASP has voiced concerns “by the recent reports of threats and intimidation directed at some civil society organizations cooperating with the Court” and reiterated “its commitment to uphold and defend the principles and values enshrined in the Rome Statute and to preserve its integrity undeterred by any threats or measures against the Court, its officials and those cooperating with it,”2. The ASP, the Office of the Prosecutor, and individual States should support and defend civil society and HRDs at risk for their work, and protect them from attacks and reprisals.

This event will discuss common challenges facing HRDs worldwide, the need for support for HRDs facing increased attacks and threats, and the role that the ICC, the ASP, and the international community can play to support and protect their work to advance justice. 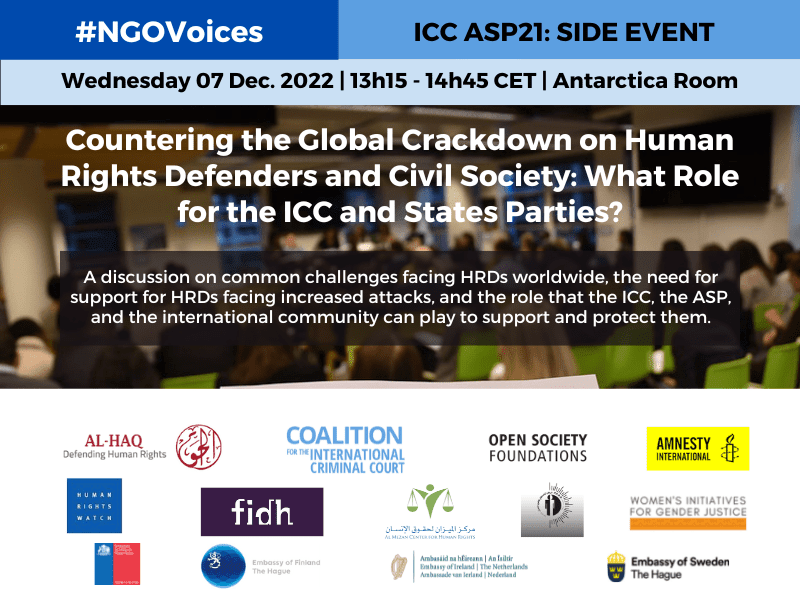