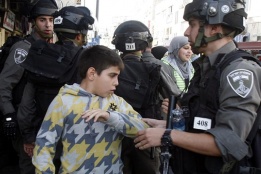 On 15 November, Al-Haq, Al Mezan Center for Human Rights, and the Community Action Center at Al-Quds University submitted a joint parallel report to the United Nations (UN) Committee on the Rights of the Child for its list of issues on Israel’s third periodic report. The joint report examines the Israeli occupying authorities’ widespread and systematic human rights violations targeting the Palestinian people, including Palestinian children, in the occupied Palestinian territory (OPT).

The joint parallel report highlights the Israeli occupying authorities’ failure to fulfil the rights of Palestinians under the Convention on the Rights of the Child (CRC) in the OPT and their obligations under international humanitarian law and international human rights law applicable to the West Bank, including the eastern part of occupied Jerusalem, and the Gaza Strip. Moreover, the submission highlights Israeli efforts to erase Palestinians, who are not mentioned once in Israel’s State report, as well as Israel’s attempt to absolve itself of its legal obligations towards protected Palestinians in the OPT and Syrians in the occupied Syrian Golan, and stresses on the applicability of the Convention therein.

Furthermore, the joint parallel report details Israel’s widespread and systematic policy of deliberate resort to lethal and other excessive force, including by implementing its shoot-to-kill policy, as a tool of oppression and domination, targeting Palestinians on both sides of the Green Line, including Palestinian children. Noting that the Israeli Occupying Forces (IOF) have killed 144 Palestinians, including 33 children, throughout the OPT, between 1 January and 30 September 2022, the submission highlights an escalation in the use of Israel’s resort to lethal, indiscriminate and disproportionate force against Palestinians. This is further evidenced in its shoot-to-kill policy, as documented, for example, during the 2018 Great Return March in the Gaza Strip. The submission further draws attention to Israel’s five full-scale military offensives against the Gaza Strip, since its unilateral imposition of closure and blockade in 2007, as well as settler violence, which is carried out with impunity and under the protection of the IOF. In addition, the submission highlighted Israel’s policy of withholding of bodies to be used as bargaining chips.

Notably, the submission underscores the effects of Israel’s unlawful use of force on the Palestinian right to health, whereby the IOF employ its policy of ‘shoot-to-maim’, including against Palestinian children. Moreover, the submission underlines how Israel’s closure policy and related restrictions, decades of occupation, repeated military incursions, and regular military bombardments have crippled Gaza’s healthcare system to the point of being unable to meet the needs of its population. In this regard, the submission highlights Israel’s complex, arbitrary, and discriminatory permit regime over Palestinians in Gaza, which consequences can be fatal.

Moreover, the submission highlights the affects of Israel’s colonial settlement enterprise on Palestinian children, who are routinely subjected to forcible transfer and house demolitions. Noting that Israel has demolished 853 Palestinian homes in the occupied West Bank, displacing 911 families, including 1554 Palestinian children, since 2019, the submission emphasises that Israel’s policy of house demolitions constitutes a significant breach of the CRC, as well as other international human rights treaties and international humanitarian law. In addition, the submission underscores how Israeli bombardments disproportionately affected civilians and civilian infrastructure and left hundreds of thousands of Palestinians in Gaza homeless and internally displaced, further exacerbating the already dire socio-economic conditions.

The submission further examines Israel’s policy of house-arrests, as one of its means to ensure its control and domination over Palestinian children in Jerusalem, and highlights the dire affects on both the children and the parents, who are forced to become a ‘prison guard’ for their child. Moreover, the submission covers Israel’s ban on family reunification policy, which ultimately aims to racially engineer the Palestinian population and entrench Israel’s fragmentation of the Palestinian people.

Overall, the organisations, which will be engaging with the UN Committee on the Rights of the Child during the Committee’s pre-sessional working group in February 2023, as well as the subsequent review of the Israeli occupying authorities, urged the Committee to call on Israel, the Occupying Power, to respect, protect, and fulfil the rights of all children under its effective control as well as to report to the Committee on its compliance with the Convention therein. The organisations also urged the Committee to recognise Israeli judicial mechanisms as unwilling to genuinely prosecute international crimes committed against the Palestinian people, including Palestinian children, to call for international justice and accountability at the International Criminal Court, to bring an end to Israeli impunity and guarantee justice for Palestinian victims, and to recommend the UN Secretary-General to immediately list the IOF in the list of shame for violations against children in armed conflict.