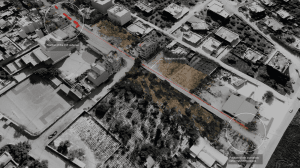 On 3 November 2022, in commemoration of the International Day to End Impunity for Crimes Against Journalists, Al-Haq and Forensic Architecture hosted a hybrid press conference to announce the joint submission of forensic evidence on the extrajudicial killing of Shireen Abu Akleh to the International Criminal Court (ICC). The conference was attended by members of the Abu Akleh family, her colleagues, and legal teams seeking to push forward her case for accountability in the Hague.

The methodological report, prepared by Al-Haq's Forensic Architecture Investigation Unit and Forensic Architecture, showcases the evidence and circumstances of the killing of Al-Jazeera reporter Shireen Abu Akleh. Our findings in addition to our legal analysis establish that Israel’s report on the incident is false and deliberately misleading. Having created a 3D precise, measurable, and geo-locatable photogrammetry model of the scene and using different footage of the incident, our investigation confirms that Shireen and her colleagues were explicitly targeted, despite being identified as members of the press.

We conclusively demonstrate that the source of the fatal gunfire was an Israeli Occupying Forces (IOF) marksman in a military vehicle. Contrary to IOF’s statements, our investigation illustrates that there were no ‘widespread and indiscriminate shots' from 'armed Palestinians’ in the minutes leading up to the killing of Shireen Abu Akleh; and there were no armed Palestinian persons present at the time and in the area in which [she] was killed. We also show that Shireen was prevented from receiving medical attention and help after being shot.

On 11 May 2022, Al-Jazeera reporter Shireen Abu Akleh and a group of five other journalists arrived at Balat Al Shuhada' street in Jenin to report on an IOF raid on the nearby refugee camp. The journalists wore ‘PRESS’ vests, and slowly approached the IOF, which was a convoy of five armored vehicles parked along the same roadway, about 200 meters to the south of the journalists. At 6:31 AM, journalist Ali Al-Samoudi was hit in the shoulder, as a result, of an IOF marksman firing the first burst of six bullets directly at the group of journalists from a sniper hole in the military vehicle at the front of the IOF convoy. Eight seconds later, as the journalists attempted to take cover, the IOF marksman fired a second burst of seven gunshots at the journalists, leading to the killing of Shirin Abu Akleh who was shot in the head. Two minutes later, an unarmed civilian, Sharif al-Azab, attempted to reach Shireen to assist her, and he too was fired at with three distinct gunshots.

This investigation is the second major project conducted by Al-Haq’s newly established Forensic Architecture Investigation Unit (FAI Unit). The first of its kind in the Middle East, the FAI Unit employs Forensic Architecture’s established methodologies and techniques for monitoring and documenting violations against Palestinians for the purposes of legal accountability and public advocacy. In so doing, the FAI Unit aims to produce a new generation of visual investigations led by Palestinian practitioners. For more information on the work of the unit, contact the following email: [email protected]

Forensic Architecture is an interdisciplinary research agency based at Goldsmiths, University of London. We undertake spatial and media analysis for international prosecutors, human rights groups, and NGOs. Our research is presented in political and legal forums, truth commissions, courts, and human rights reports, as well as in exhibitions and public events. For more information, contact: [email protected]