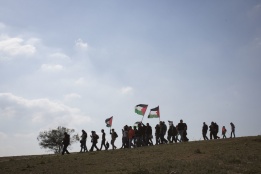 On 11 October, Al-Haq and Miftah jointly submitted a report to the UN Human Rights Council for the fourth cycle of the Universal Periodic Review (UPR) of Israel. Designed as a mechanism to encourage and evaluate compliance with a state’s commitments to its obligations under the UN Charter, the Universal Declaration of Human Rights, the international human rights treaties and conventions to which Israel is a party, the UPR is a quadrennial review of the human rights record of all member States of the United Nations.

In an effort to introduce topics that have not been prominently raised by other UN human rights bodies/mechanisms, the submission provided developments regarding Israel’s policies and practices since its previous review that continue to maintain its apartheid regime over the Palestinian people. The submission emphasized the importance of understanding the intentionality behind Israel’s discriminatory legal and administrative mechanisms, which have been designed to deprive Palestinians of their inalienable right to self-determination, in order to understand the tools and actions necessary to dismantle the root causes of Palestinian oppression.

Presenting on Israel’s ongoing operations to actively suppress Palestinian self-determination, the submission detailed Israel’s willful killing, collective punishment, intimidation, and smear campaigns against Human Rights Defenders. Such operations were highlighted through reporting on the Israeli Occupying Forces (IOF) 2022 indiscriminate offensive on the Gaza Strip, resulting in 46 Palestinians casualties, and the excessive use of force during an IOF raid in Jenin on 28 September, causing the death of four Palestinians.  The submission also discussed Israel’s discriminatory planning and zoning policies, such as the May 2022 Israeli High Court of Justice decision to  reject appeals against eviction orders issued to the residents of eight communities in the Masafar Yatta region in the south Hebron Hills, that are under the imminent threat of forcible transfer.

Al-Haq and Miftah believe that the previous recommendations given by member states to Israel, addressing self-determination and racial discrimination, does not capture the ongoing settler-colonial apartheid regime against the Palestinian people. Accordingly, the recommendations in Al-Haq’s submission endeavour to capture the systematic changes that must be implemented to dismantle Israel’s oppressive settler-colonial and apartheid regime that has persecuted the Palestinian people for over 74 years. These recommendations are as follows: