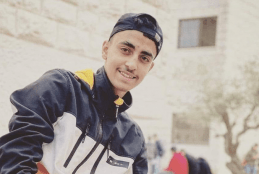 On 27 September 2022, as part of its engagement with the UN Human Rights Council 51st session, Al-Haq, on behalf of partner organisations,[1] submitted a joint oral intervention under agenda item 4 on human rights situations that require the Council’s attention, highlighting Israel’s widespread and systematic implementation of its shoot-to-kill policy. The statement was delivered by Mr. Khalil al-Yazouri, the father of Thaer al-Yazouri, a 16-year-old Palestinian child who was shot and wilfully killed by the Israeli Occupying Forces (IOF) on 11 May 2022. Mr. al-Yazouri explained how the ambitions and dreams of his child were taken away by an Israeli bullet. Mr. al-Yazouri then urged the Council and the international community to address Israel’s shoot-to-kill policy, and to ensure the protection of Palestinians, including Palestinian children.

Thaer was a student at Al-Hashemiya Secondary Boys School, which is located approximately 400 meters away from the entrance of the illegal settlement of Psagot. The close proximality of Psagot settlement to Ramallah city and Al-Hashemiya Secondary Boys School specifically leads to routine confrontations between Palestinian youth and the IOF, which are usually located and protected behind cement cubes. On 11 May 2022, at around 8:30 am, around ten Palestinian children gathered outside their school. At around 9:20 am, as more students arrived, six to eight Israeli occupying soldiers advanced in front of the cement cubes, which prompted the Palestinian youth to flee and hide. At the same time, a group of around six Israeli occupying soldiers proceeded towards the Palestinian youth from the other direction; a tactic that is usually used by the IOF to surround and trap Palestinians. One of the occupying soldiers took a sniping position and fired four to five bullets towards Thaer. At the time Thaer was shot, he was approximately 90 meters away from the closest Israeli occupying soldier and did not pose any threat. Critically, all the fired shots were aimed at Thaer’s upper body; indicating that the IOF targeted Thaer with the intention to kill. After he was directly hit in the chest, Thaer was transferred by a Palestinian civilian car to Ramallah Medical Complex, where he was pronounced dead at around 10:15 am.

The intervention reads as follows:

I’m Khalil al-Yazouri, the father of Thaer al-Yazouri [16], who was killed by the Israeli occupying forces, may his soul rest in peace. Thaer was like any other young man, he had ambition. He was a football player. He had a goal in his life. He was ambitious, but sadly, the [Israeli] occupation killed this ambition. The [Israeli] occupation turned Thaer from an athlete to non-existent. May his soul rest in peace.

My message to the world and to all people is to reject the persecution inflicted upon children and defenseless people. I don’t know, I mean, may his soul rest in peace, but this is the situation that we’re living here in Palestine. These are the circumstances that we live on a daily basis.

I wish our voice would reach the whole world so that they would pay attention to our people and to the victims that we lose every day. Thaer is not the first Palestinian killed by Israel and he will not be the last. But this blood shed continues [with impunity], and innocent children are being killed in cold blood by the criminal Zionist regime.