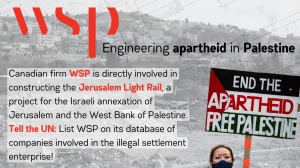 Today, Al-Haq and Just Peace Advocates submitted a report to the newly appointed UN High Commissioner for Human Rights, Volker Türk, calling for WSP Global Inc. (WSP), a Canadian company, to be included to the UN database of businesses operating in illegal Israeli settlements (‘the database’). The submission is endorsed by 105 organistions from all over the world, in addition to esteemed individuals, such as former Canadian Member of Parliament Libby Davies; former UN Special Rapporteurs Michael Lynk, John Dugard, and Richard Falk; and Noam Chomsky.

WSP, whose major shareholder is the Canadian Public Pension Investment Board, has been contracted to plan, design, maintain, and extend the Jerusalem Light Rail (JLR),[1] an Israeli public tramway system that contributes to the maintenance of illegal Israeli settlements in occupied and annexed Eastern Jerusalem. WSP facilitates the practice of forcible transfer of settlers into the occupied Palestinian territory (OPT), through its construction and servicing of the JLR, while deepening the physical, social and economic integration of the settlements. Through its active maintenance of Israel’s illegal settlement enterprise[2] in occupied Eastern Jerusalem, WSP is involved in gross and systematic violations of fundamental human rights against the protected Palestinian population.

Dr. Susan Power, Al-Haq’s Head of Legal Research and Advocacy, explains, “By operating rail services connecting settlements in the OPT, on land appropriated from the occupied Palestinian population, WSP is complicit in aiding and abetting the commission of war crimes, and agents for the company may be held individually criminally liable.”

The appropriation of Palestinian land and destruction of Palestinian property executed for the construction and maintenance of the JLR violates Article 147 of the Fourth Geneva Convention.  In accordance with international law and the UN Guiding Principles on Business and Human Rights, WSP, as a corporation operating in a conflict-affected area, must comply with international humanitarian law and human rights law, by means of establishing policies that seek to prevent human rights abuses during its operations and trade. Moreover, WSP is expected to act with enhanced due diligence when conducting business at home and abroad.[3]

“Canada, as the home state of WSP,” explains Karen Rodman, Executive Director of Just Peace Advocates, “is the primary duty bearer in ensuring that WSP is held to account, for its maintenance of Israel’s illegal settlement enterprise, and must fulfill its obligations to facilitate measures and remedies for the compensation of the affected Palestinian communities, whose rights to movement, property, livelihood, and family have been severely violated due to WSP’s activities.”

Considering WSP’s Code of Ethics stating its commitment to respect, support and safeguard human rights, as well as its status as an active participant of the UN Global Compact, its complicity with Israel’s extensive destruction and appropriation of Palestinian property, through the construction of the JLR, is of grave concern. WSP must cease its activity in the OPT, in accordance with its internal policies and values, and international law.

The database remains a powerful tool for assuring transparency of business enterprises that are involved in, and profit from, Israel’s apartheid regime. Yet, without annual and comprehensive updates to the database, corporations, such as WSP, remain unlisted. It is essential that the HRC fulfils the duty of its mandate to resolution 31/36 (2016) and annually update of the database to ensure it remains an effective mechanism for accountability and transparency.

As Israel’s occupation and apartheid regime is further entrenched by corporations who continue to profit from, and reinforce, Israel’s grave breaches of international law, which deny the Palestinian people their inalienable right to self-determination, including permanent sovereignty over their land and other natural resources. Accordingly, the joint-report calls on the Office of the High Commissioner for OHCHR to:

ECOSOC Organizations are designated with an asterisk.

[1] The JLR, which services the illegal settlements, also provide services to the A1 train line project between Tel Aviv and Jerusalem, which crosses the Green Line into occupied Palestinian territory (OPT).

[2] The establishment of which, is internationally condemned under UN Security Council as having “no legal validity” and constituting “a flagrant violation under international law,” UNSC Resolution 2334 (23 December 2016), p.1. Canada also recognizes the illegality of Israel’s settlements and understand that they “constitute a serious obstacle to achieving a comprehensive, just and lasting peace.” Government of Canada, ‘Canadian policy on key issues in the Israeli-Palestinian conflict’ (Government of Canada, 19 March 2019)