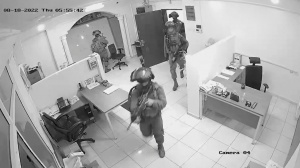 Al-Haq sent over 80 letters to Third States on Sunday, 21 August 2022, calling for action, as Israeli authorities summoned the General Directors of two of the designated organisations for questioning, threatening with arrests and imprisonment should human rights work continue.

On 18 August 2022, at approximately 3:00 am, Israeli Occupying Forces (IOF) entered Ramallah, forcibly entering, raiding the offices and confiscating property from the six designated Palestinian civil society organisations, Al-Haq, Addameer, the Bisan Center for Research and Development, Defence for Children International-Palestine, Union of Agricultural Workers Committees (UAWC), and the Union of Palestinian Women’s Committees (UPWC). The IOF also raided the offices of the Health Workers Committees. The organisations are designated by Israel under its Counter Terrorism Law of 2016, and under military order issued on 3 November 2021, as ‘terrorist’ and ‘unlawful associations’. The designations have been collectively condemned by UN Experts warning that the “misuse of counter-terrorism measures in this way by the government of Israel undermines the security of all”.

Last Thursday, 18 August 2022, following a decision by Benny Gantz rejecting Al-Haq and the organisations appeals against its outlawing, the military order took full effect in the occupied Palestinian territory (OPT). Yehuda Fox, the Israeli military commander, then led an armed incursion into Ramallah to forcibly close the six organizations, in an attempt to quash the work of human rights defenders, in serious violation of the fundamental right to freedom of expression and association. Military forces sealing off the offices preventing any entry, attaching, alongside it, a military order on the main entrance door. The military order warned that “those administering the organization, must shut down the organization, refrain from managing it and keep it shut, from the moment of receipt of this order”. The closures exemplify Israel’s contempt for international law and constitute the latest attempt to frustrate the work of respected human rights organizations towards Israel’s accountability for serious international crimes committed in the OPT, namely war crimes and crimes against humanity.

Today, 21 August 2022, at 9:31 am, the IOF summoned the General Director of Al-Haq, Mr Shawan Jabarin for interrogation at the Ofer military base, located near Ramallah. The caller who introduced himself as Captain Fahed, informed Mr Jabarin that Israel and the Israeli army have declared Al-Haq an illegal entity and a terrorist organization that was shut down and that Israel will not allow the organization to remain open and functioning. The caller then falsely claimed that Al-Haq has ties to the Popular Front for the Liberation of Palestine (PFLP) and that Mr Jabarin is a member of the PFLP. The caller threatened Mr Jabarin that a price, including a personal price from Shawan, will be paid through imprisonment, interrogations and other measures, if Al-Haq continues to work.

Today, at 14:25, lawyer and General Director of Defence for Children International, Palestine (DCI-P), Mr Khaled Quzmar was summoned for interrogation at the Ofer military base by a Shin Beta agent. At 15:20 an eyewitness reported seeing Mr Quzmar escorted into Shin Bet premises. Mr Quzmar was not allowed to have legal counsel accompany him. Two hours later, Mr Quzmar was released from the custody of the Shin Bet and allowed to go home.

The situation has now significantly deteriorated and the staff, of the six designated organizations, in particular Mr Shawan Jabarin and Mr Khaled Quzmar are under grave and immediate risk of arbitrary arrests, prosecutions on secret evidence, administrative detentions, and their financial and banking assets and those of the organisations are under threat of appropriation. Further, the human rights work of the organizations and humanitarian work, is gravely threatened by the closures.

Al-Haq urgently demands that the international community immediately take targeted and effective action to protect the General Directors and staff of the six organisations who are now facing existential threats.