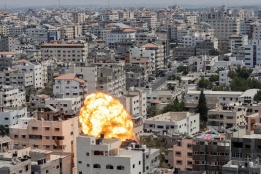 Today, Al-Haq sent an urgent appeal to UN Special Procedures, calling for immediate and urgent intervention, to cease the escalation of hostilities in the Gaza Strip and to ensure the delivery of humanitarian supplies, and to intervene to facilitate exit permits for critically ill patients to access treatment outside the Gaza Strip.

On 5 August 2022, Israel launched a military offensive, the so-called “Truthful Dawn,” on the occupied Gaza Strip, which indiscriminately targeted civilians and non-military structures, killing 32 Palestinians, including six children, and injuring 265 Palestinians.[1] At least forty families have been displaced after their homes were damaged or destroyed by Israeli airstrikes.[2] This attack was preceded by several days of Israel’s escalation of hostilities, resulting in the dispensing of Israeli military aircrafts across the Gaza Strip. On 2 August, Israeli authorities closed all crossings into Gaza, prohibiting the freedom of movement of the protected Palestinian population within the Gaza Strip, in violation of international humanitarian law.[3]

On 7 August 2022, Al Mezan issued a warning that: “of the serious health risks for Gaza patients due to the closure of Erez, who are banned from accessing life-saving treatments otherwise unavailable in Gaza due to Israel’s closure”. [4] According to the Palestinian Ministry of Health’s Coordination and Liaison Department, “|none of Gaza patients with serious diseases who have medical referrals to hospitals and medical facilities outside Gaza were able to leave the Strip [since last Tuesday] and are still waiting for a decision from the Israeli authorities to allow them to travel”.[5] According to Al Mezan’s field analysis, “the same sources also pointed out that the number of Gaza patients needing to travel via Erez is increasing, as the daily average of patients obtaining approval for Israeli exit permits is around 120.”[6]

In addition, Israel’s closure of the Kerem Shalom crossing has prevented the passage of fuel into the occupied Gaza Strip, which Gaza’s sole power station, the Gaza Power Plant (GPP), requires to remain in operation. On 6 August, the Gaza Energy Authority stated that, due to the inaccessibility of fuel, GPP had completely shut down, significantly reducing the supply of electricity to only four hours per day.[7] The forced closure of the GPP endangers the 2.17 million Palestinians, the protected occupied population living in the occupied Gaza Strip, threatening the collapse of basic essential public services, including access to healthcare, water, and sanitation. Due to the limited fuel supply, exacerbated by enforced border closures, it is expected that the general supply of electricity in Gaza will stop entirely in the coming days.[8]

The Ministry of Health in Gaza has announced that the cessation of health services would occur within 72 hours of the closure of the GPP.[9] The impending stoppage of vital health services in the occupied Gaza Strip coincides with Israel’s escalation of violent attacks, which have wounded hundreds of Palestinians, many in need of ongoing urgent medical attention. Additionally, the significant restriction of movement on Gazan patients and health workers has obstructed crucial medical attention and supplies from entering the occupied Gaza Strip in violation of international humanitarian law and gravely endangering Palestinians.

Israel’s aggressive assault and bombardment of the civilian population and infrastructure in the occupied Gaza Strip is being conducted disproportionally and excessively, relative to Israel’s anticipated military advantage, constituting a grave breach of international humanitarian law and may amount to war crimes and crimes against humanity.[10]

[1] Field documentation on file with Al-Haq. Preliminary figures initially sourced from the Palestinian Ministry of Health, while Al-Haq carries out field investigations. These statistics may increase as Al-Haq continues to collect further information as the escalation develops. Figures as of 13:00 on 7 August 2022.

[2] Al-Haq field report, featuring preliminary records of Palestinian Ministry of Health, as of 13:00 on Sunday 7 August 2022.

[9] Field documentation on file with Al-Haq.