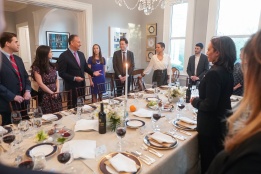 On April 16, United States Vice President, Kamala Harris, and Second Gentleman, Douglas Emhoff, held a Seder at the Vice President’s Residence in which wine from Psagot Winery, an illegal Israeli settlement enterprise in the occupied West Bank, was served and predominantly featured in the event’s social media promotion. The United States’ receipt of stolen goods, comprising the proceeds of international crimes, and direct involvement in the promotion of Israel’s illegal settlement enterprise is of grave concern.

Established on appropriated Palestinian land belonging to the Quran family, the Psagot Winery is an illegal settlement enterprise, the establishment of which, is internationally condemned under UN Security Council resolution 2334 (2016) as having “no legal validity” and constituting “a flagrant violation under international law”.[1] As such, Psagot Winery is complicit in the continued illegal appropriation of privately owned Palestinian land and pillage of Palestinian natural resources, acts amounting to crimes within the jurisdiction of the Rome Statue of the International Criminal Court.[2] In so doing, Psagot Winery has deepened the physical, social, and economic integration of settlements into the OPT, while further fragmenting Palestinian territory and society.

Since 1948, Israel has employed a set of discriminatory laws, policies, and practices, with the fundamental goal of engineering a Jewish majority in Palestine, through displacing and dispossessing Palestinians, manipulating the demographic composition of the Palestinian population, and at the same time, building and expanding Jewish settlements on both sides of the Green Line. Settlements are a key component of Israel’s apartheid regime over the Palestinian people, in which Israel administers the territory under two entirely separate legal systems and sets of institutions: a civil administration for Israeli-Jewish communities living in illegal settlements, and a military administration for the occupied Palestinian population living in Palestinian towns and villages.

Through the systemic deprivation of natural resources that illegal Israeli settlements impose upon Palestinians, the United States’ support of the Israeli settlement enterprise is also complicit in depriving the Palestinian people of their own means of subsistence, in violation of Article 1(2) of the International Covenant on Civil and Political Rights and Article 1(2) of the International Covenant on Economic, Social and Cultural Rights,[3]  advancing Israel’s efforts to annex and colonize the West Bank. The United States' decision to feature and promote its support of illegal Psagot settlement wines in its highest office are acts in blatant violation of its international humanitarian law obligation to respect and ensure respect for the Geneva Conventions of 1949, and international responsibility to not recognize and to bring to an end Israel’s internationally wrongful acts, including its violation of peremptory jus cogens norms of apartheid.[4]

The United States’ decision to support the presence and sustainment of the illegal Israeli settlement enterprise in its highest office is in blatant violation of international humanitarian law and international human rights law. This active support of the illegal Israeli settlement enterprise is complicit in the war crime of pillage under Article 8(2)(b)(xvi) of the Rome Statute, and in the illegal facilitation of the ongoing transfer of settlers into the OPT, constituting a violation of Article 49 of the Fourth Geneva Convention. Moreover, the U.S. substantially supports the dissemination and promotion of Psagot Wine by allowing it to be sold by Duty Free America shops located across American airports.

The actions of the Office of the Vice President also breach the United States’ obligation to promote respect for human rights with business enterprises with which they conduct commercial transactions and to deny public support of business enterprises that are involved with gross human rights abuses.[5] Moreover, it should be noted that by allowing the dissemination and promotion of Psagot Wine to be sold by Duty Free America,[6] this office has decided to ensure and support the continuity of the Israeli settlement enterprise in violation of international law, thus denying the Palestinian people the realization of their right to self-determination and permanent sovereignty over their national resources.

Considering the United States' historic support of the Psagot Winery and Israel’s illegal settlement regime under the Trump Administration, the Biden administration’s failure to abide by its obligations to protect Palestinians' inalienable right to self-determination and sovereignty over their natural resources is of grave concern. Al-Haq calls on the office of the United States Vice President to take all necessary actions to cease support of Psagot Winery and end all business relations with actors operating in Israeli illegal settlements, in compliance with the United States’ obligations to promote and respect human rights set forth by international law. Al-Haq also calls on the United States to take serious steps to dismantle illegal colonial settlements and their infrastructure across the OPT, halting their planning, construction and expansion, and ending economic exploitation by transnational and Israeli businesses of the natural resources of the Palestinian people.

[1] Articles 49, 147 of the Fourth Geneva Convention Relative to the Protection of Civilian Persons in Time of War, 12 August 1949; the UN Security Resolution 2334 of December 2016 affirmed “that the establishment by Israel of settlements in the Palestinian territory occupied since 1967, including East Jerusalem, has no legal validity and constitutes a flagrant violation under international law and a major obstacle to the achievement of the two-State solution and a just, lasting and comprehensive peace.” UN Security Council, Security Council resolution 2334 (2016) [on cessation of Israeli settlement activities in the Occupied Palestinian Territory, including East Jerusalem], 23 December 2016, S/RES/2334 (2016); A/HRC/37/43, Israeli settlements in the Occupied Palestinian Territory, including East Jerusalem, and the occupied Syrian Golan, para 69.

[3] By forcibly taking Palestinians’ fertile land, settlers have robbed the landowners not only of their homes, but also of their livelihoods. For example, Keinat Quran, the rightful owner of the land on which Psagot Winery now sits, is no longer allowed to live off the products of her land and is now less capable of providing for herself and her family.  See The Independent, “Grapes of wrath: how wine could bottle the Israeli-Palestinian peace process,” (16 June 2019) https://www.independent.co.uk/news/world/middle-east/israel-palestine-wine-vineyards-west-bank-psagot-settlement-eu-a8959301.html.

[4] Common Article 1 to the four Geneva Conventions of 1949; Article 41, Responsibility of States for Internationally Wrongful Acts (2001).

[5] The UN Guiding Principles on Business and Human Rights (2011), available at https://www.ohchr.org/sites/default/files/documents/publications/guidingprinciplesbusinesshr_en.pdf.

[6] Duty Free America is owned by the Falic family, who has become majority shareholders and directors of Psagot Winery and contributed millions of shekels to the winery's expansion and international notoriety. See The Independent, “US Duty Free magnates bankrolled expansion of Israeli settlement vineyard over Palestinian land” (12 Nov. 2019) https://www.independent.co.uk/news/world/middle-east/palestine-israel-land-us-falic-psagot-duty-free-land-a8989086.html.