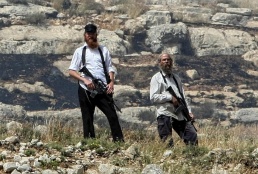 On 14 April 2022, Al-Haq submitted an urgent appeal on the intensifying level of violence against Palestinians by colonial settlers committed with institutionalized impunity. The appeal highlights alarming forms and levels of colonial settler violence throughout Palestine in 2021, and intensified price tag attacks in particular, after the killing of a colonial settler by allegedly two Palestinians on 16 December 2021, and recent attacks by Palestinians inside the Green Line since 27 March 2022.

While increase of colonial settler attacks have been observed as acts of reprisals after the aforementioned attacks, Al-Haq stresses that colonial settler violence is a direct result of the settlement enterprise illegally initiated and expanded by the Israeli occupying authorities, and has been allowed to continue and escalate due to Israel’s systematic failure to conduct effective investigations and prosecutions of the offending colonial settlers, creating a climate of impunity, as well as the international community’s failure to bring to end Israel’s systematic violations of international law.

The appeal highlights levels and trends of colonial settler violence against Palestinians in 2021, especially during the violent campaign of repression carried out by the Israeli occupying forces (IOF) and Israeli police against the Palestinian people amidst the Unity Uprising, as colonial settlers also intensified their organised violence against the Palestinian people on both sides of the Green Line, organizing attacks against Palestinian citizens of Israel and their properties with the protection of the Israeli police, and killing Palestinian citizen of Israel from al-Lydd, Mousa Hassouna, 32, on 10 May 2021. As the Unity Uprising continued with demonstrations taking place across Palestine, colonial settlers killed three Palestinians in one single day on 14 May 2021 in three events confronting Israeli settler assaults in Hebron, Salfit, and Nablus: Ismail Jamal al-Toubasi, 27, Awad Ahmad Harb, 27, and Husam Wael Asayrah, 19.

The appeal sheds light on intensified price tag attacks in the West Bank after the killing of colonial settler by allegedly two Palestinians on 16 December 2021, especially in Nablus Governorate. The settler was killed as he left the illegal Homesh settlement, which was established on a confiscated land from Burqa village, northwest of Nablus. On the same evening of the killing, colonial settlers blocked main roads between Palestinian cities and towns, and attacked passing Palestinian vehicles. On 17 and 23 December 2021, colonial settlers raided Burqa village, indiscriminately opened fire on the residents, threw stones at homes, torched Palestinian homes and properties and smashed tombstones.

Moreover, the appeal underscores the most recent intensified colonial settler attacks in acts of vengeance since 27 March 2022, after a series of attacks by Palestinians inside the Green Line. Since the aforementioned date, excessive use of force, and collective punishment by IOF have been accompanied by statements made by Israeli officials, inciting further violence by colonial settlers against Palestinians, including Prime Minister Naftali Bennett’s call on 30 March 2022 for Israelis to hold arms.[1] Most of the prominent trends by colonial settlers since then has been closing main roads and attacking Palestinians in their vehicles, including by throwing stones, spreading a widespread sense of unsafety for Palestinians to move between cities and towns, and obstructing their right to freedom of movement, and their right to access health, education, and work. Other trends also include attacking Palestinians in their homes, by throwing stones at homes’ windows, destroying vehicles and torching them, and spray-painting racist speech at Palestinian homes’ fences and doors.

In this regard, the urgent appeal, requested mandate holders to publicly condemn and address these attacks, and to urge Israel to immediately halt the expansion of its unlawful settlement enterprise and progressively undertake measures to dismantle all existing settlements; and to take all necessary measures to ensure effective law enforcement against colonial settlers’ perpetrators and launch investigation into incidents of colonial settler violence.

Al-Haq also called mandate holders to call on Third States to institutionalise a ban on settlement imports, support the UN Database of all business enterprises involved in or with settlements, and undertake necessary measures that guarantee Israel’s genuine law enforcement and investigation into incidents of colonial settler violence. The appeal called special rapporteurs to call on the International Criminal Court and the prosecutor to push forward with their investigation into the Situation in Palestine, so that justice and accountability can be given for the victims of Israel’s war crimes and crimes against humanity.