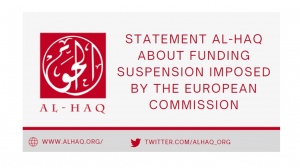 On 17 December 2021, members of the S&D Group in the European Parliament submitted parliamentary questions about a funding suspension Al-Haq has been subjected to by the European Commission. NGO Monitor, a toxic defamation organization affiliated with the Israeli government, has seized these questions to launch further attacks on European funding for Al-Haq and Palestinian civil society more broadly.

Regrettably, the Commission has displayed highly problematic and improper behaviour vis-à-vis Al-Haq, preparing the stage for NGO Monitor’s latest attacks. To set a few facts straight, we clarify the following:

The suspension is not a recent development. The Commission imposed it in May 2021, freezing one of our legal projects funded by the European Union (EU). It did so with reference to “a report by the Israeli government that accuses the misuse of European donors’ funds by Palestinian civil society organisations to fund terroristic activities.”

The referenced report is the exact same ‘confidential Israeli government report’ exposed by +972 Magazine (and other media) as containing no serious evidence at all against Al-Haq and the other five Palestinian NGOs, which Israel designated in October 2021 as “terrorist organizations” (see also this follow-up article by +972 Magazine).

We have seen and reviewed this flawed report. The minimal information in it relating to Al-Haq is completely ridiculous. Based on an unsubstantiated testimony by someone who has never been involved in Al-Haq, it claims “anyone who is not a PFLP operative is prohibited from working” at Al-Haq. The sheer absurdity of this claim doesn’t require any further comments.

When the Commission announced its funding suspension, it informed us it would verify whether our project had been “subject to any breach of obligations or irregularities”. It launched a review for that purpose, which we complied with. This review was completed in July 2021 – months before Israel designated Al-Haq for political reasons. The review identified no ‘breach of obligations or irregularities’. Why did the Commission fail to lift its funding suspension at that point?

In addition, the Commission has failed to clarify and substantiate the factual and legal grounds of its suspension. We requested this clarification as early as May 2021. Until today, we have not received it. The Commission has simply ignored our legitimate questions and requests in this regard, which are of direct relevance to our ability to defend ourselves against Israel’s allegations and any adverse measures by the EU based on these allegations.

The Commission only replied at the end of 2021, after we had involved a lawyer. It did so with reference to Israel’s designations, confirming it had not lifted the funding suspension pending “further investigations” of information received from the Israeli authorities – adding “a decision on the suspension is unlikely to be made before the end of first quarter of 2022” – i.e. not before the end of March.

This is shocking. Like several EU Member States, the Commission has repeatedly acknowledged that Israel has failed to date to present concrete and credible evidence against the six designated NGOs, including Al-Haq. It is completely aware of the serious risks these NGOs face, at organizational and individual level. Why would the Commission increase our vulnerability by acting upon Israel’s designations, delaying its determination by months – effectively encouraging Israel to further escalate its campaign of political persecution?

This is both puzzling and troubling, considering that the Commission is fully aware of the political agenda behind Israel’s assault on Palestinian civil society. Israel seeks to disrupt the NGOs that monitor, report and promote accountability for its severe violations of human rights and international law, among them war crimes and crimes against humanity, including the Crime of Apartheid. Flanked by proxy organizations like NGO Monitor, Israel does so through campaigns defaming, deplatforming and defunding Palestinian civil society.

Under the former Commission, such campaigns were denounced as “unfounded and unacceptable”. In an official letter in July 2017, former EU High Representative Mogherini blasted former Israeli Minister of Strategic Affairs Erdan for “contributing to disinformation campaigns”. She did so in response to allegations as vague, unsubstantiated and politically-motivated as the claims underlying Israel current efforts to criminalize and destroy Palestinian civil society.

We know that Al-Haq still has many friends in the EU, at the Commission and across its Member States. However, we also know that the current Commission includes officials who are keen on accommodating Israel’s agenda, at the expense of the legitimate concerns and interests of Palestinian civil society and the basic rights of the Palestinians at large.

As Al-Haq, we sincerely hope the EU will return to its value- and trust-based engagement with Palestinian civil society, which has characterized our principled relations for long. For the sake of Palestinian civil society – but also in the EU’s own interest, as the leading global actor promoting human rights and the rule of law and the main international sponsor of a viable two-state solution.

The funding suspension the Commission has imposed on Al-Haq marks a break with this engagement. It is unfounded and illegitimate and should be rejected by anyone supportive of democratic principles and human rights. As noted above, the Commission’s treatment of Al-Haq has been characterized by a stunning lack of transparency and responsiveness, in violation of the Commission’s minimum standards of good administration. We will consider further options and steps to challenge the suspension, which has lasted for more than nine months.

(For more information on NGO Monitor’s agenda and tactics, see the September 2018 report by the Israeli Policy Working Group: “NGO Monitor – Defaming human rights organizations that criticize the Israeli occupation”; including a section on p. 35-37 about NGO Monitor’s attacks on Al-Haq)