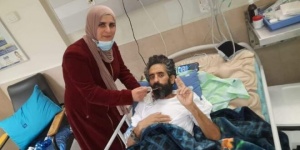 On 4 January 2022, Al-Haq and Addameer Prisoner Support and Human Rights Association (Addameer) sent letters to Third States and European Union High Representatives calling on them to intervene to secure the release of Palestinian detainee Hisham Abu Hawash whose deteriorating health condition meant his life was in immediate danger. He had spent 141 days (over 4 months) on open hunger strike, which he began in early August 2021 in protest of his continued arbitrary and indefinite administrative detention, without charge or trial. During the last few days, he slipped in and out of a coma, and temporarily lost his eyesight and his ability to speak, according to local media reports.[1]

On the same day that letters were sent by Al-Haq and Addameer, an agreement was reached with Israel (4 January 2022) to end Hisham Abu Hawash’s 141-day hunger strike. According to his Attorney Jawad Boulos Hisham, Abu Haswash is expected to remain in an Israeli hospital for medical follow-up until 26 February 2022, after which he will be released to his home.[2]

As a direct result of the unlawfulness of the administrative detention orders, Palestinian administrative detainees (more than 500)[3] have launched a boycott of the military court system, by for example, refusing to show up to their court sessions or by going on hunger strike.[4] On 21 October 2021, UN experts strongly expressed "grave fear" for the lives of the hunger-striking Palestinian detainees.[5]

In light of the above, Al-Haq and Addameer urged state representatives to:

[7] Article 78 of the Fourth Geneva Convention related to the Protection of Civilians in Times of War (1949) 5 Convention Against Torture and Other Cruel, Inhuman or Degrading Treatment or Punishment, 10 December 1984 (Entry into force 26 June 1987)