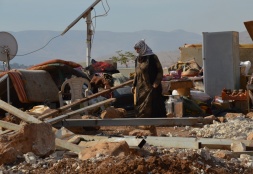 On 20 December 2021, Al-Haq submitted an Urgent Appeal for the immediate intervention of UN Special Procedures in the imminent demolition of ten structures in the Bedouin community of Al-Hadidya, in the Northern Jordan Valley, in the Occupied Palestinian Territory (OPT). On Saturday, 25 November 2021, the Israeli occupation authorities authorized the demolition of aforementioned structures. These ten structures are the property of Abdelraheem Bsharat (Abu Saqr) and his family and include their residential tents as well as their only source of income, the sheds of their livestock.[1]

Abdelraheem Bsharat’s is a prominent leader and human rights defender in his community and well-known throughout the Jordan Valley. In 2016, Mr. Bsharat participated in the negotiation sessions on the Binding Treaty on Business and Human Rights held by the UN Human Rights Council, intervening on behalf of the ‘Friends of the Earth International’. There, he testified to the complicity of Israeli enterprises, such as Israel’s National Water Company ‘Mekorot’, in apartheid practices and policies that target the indigenous protected Palestinian population and called on the international community to hold Israel and its corporations accountable for adverse human rights harms in the Occupied Palestinian Territory, as a conflict affected area.[2]

Al-Hadidya is surrounded by the illegal settlement of Ro’i in the West, the militarized settlement of Humaidat in the East, the military bases of Samra and Mazuqa from the North and closed military areas in the South. The forcible transfer of the Palestinian residents of Khirbet Humsa Al-Faqa, and the neighbouring Al-Hadidya, have garnered some international attention after the brutal unlawful practices of the Israeli occupation authorities were revealed, which included a series of demolition raids, violent assaults, the confiscation of water tanks which were the community’s only source of water, and the largest forced displacement in four years, leaving 72 Palestinians homeless, including 38 children.[3]

Following the issuing of four military orders to Abdelraheem Bsharat, Al-Haq is gravely concerned that the Bsharat family are in immediate danger of being forcibly and illegally evicted from their homes. Israel continues to ignore its responsibilities under international humanitarian law through, inter alia, the construction of more illegal settlements in Occupied Palestinian Territory and especially in the area surrounding the aforementioned community. The forcible transfer of civilians from occupied territory is a grave breach of the Geneva Conventions and amounts to a war crime and crime against humanity prosecutable at the International Criminal Court.[4] Further, the destruction of the protected population’s private property is a violation of Article 46 of the Hague Regulations and amounts to inhumane acts of apartheid.[5] Al-Haq warns that both the destruction of community properties and resulting forced displacement are imminent in the case of Abdelraheem Bsharat and his family.

Accordingly, Al-Haq submits this Urgent Appeal for your immediate intervention:

[3] Al-Haq, “Over 550 Organisations call on UN Human Rights Council: “Condemnation is Not Enough – Root Causes Must be Addressed, Israel’s Impunity Must be Brought to an End, Justice Must be Achieved” (18 March 2021), available at: https://www.alhaq.org/advocacy/18044.html

Photo Credit: 26.11.2015. Jordan Valley, Al Hadidiya. Resident by the rubble after all the families’ structures were demolished. Photo EAPPI/H.Hanssen