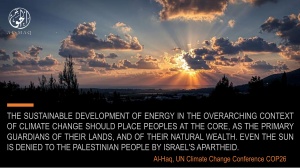 Climate change is likely to intensify energy and fuel demands to confront the exacerbation of temperature extremes and deal with water scarcity.[1] With eight and a half hours of sun every day on average, solar energy constitutes one sustainable alternative to fossil fuels towards the reduction of future greenhouse gas emissions in Palestine.[2] For many Palestinian Bedouin communities in Area C of the West Bank, under Israel’s full civil and military control, solar panels are often the only source of energy to provide for their basic human needs.

As per the Oslo Accords, Israel must ensure the construction of infrastructure and provide for civil services in Area C of the West Bank.[3] As part of its creation of a coercive environment, Israel denies access to electricity, including the connection to electrical grids, which remain at the entire disposal of Israeli settlements.[4] Zoning and planning development in Area C is placed under the entire control of Israel, the Occupying Power. In Area C, Israel has entrenched its policy of discriminatory planning and zoning, thereby denying Palestinian community development in the area, with only one per cent of Area C lands zoned for Palestinian development, and less than 1.5 percent of permit applications being approved.[5]

Deprived from access to traditional energy sources, Palestinian communities are also denied permits to set up solar panels, a requirement for all buildings in Area C.[6] Due to lack of alternative energy sources, they often build solar installations without permits, and are exposed to subsequent confiscation and demolitions, with demolition order injunctions and retroactive permit applications nearly always rejected by Israeli courts in practice. Demolition of solar panels has also included EU- and NGO-funded solar energy projects aimed at building and strengthening energy resilience for vulnerable Palestinian communities, with an estimated loss of EU aid money - including but not reduced to solar installations - of 65 million euros between 2001 and 2016.[7]

“The kids get sick all the time… At the moment, because of a change in the weather, they all have colds. Without electricity [from a Spanish-funded solar aid project] I wouldn’t even be able to see to help them when they need to use the [outdoor] toilet at night.”

While Palestinian communities are facing tremendous hurdles to the enjoyment of their right to adequate standard of living as protected under Article 11 of the International Covenant on Economic, Social and Cultural Rights,[8] Israel makes illegal profits from the sun as a renewable energy source. The Israeli Electricity Authority has projected some 1.6 billion NIS in electricity revenue generated from solar energy projects in both Israel and the occupied Palestinian territory in 2016.[9] In 2021, 8 percent of Israel’s energy originated from solar power plants, with Israel pursuing its goal of becoming the world’s leader by reaching 30 percent by 2030.[10] To date, four Israeli commercial solar fields have been constructed in industrial settlements in the West Bank.[11]

The Preamble of the Paris Agreement underlines “the intrinsic relationship that climate change actions, responses and impacts have with equitable access to sustainable development and eradication of poverty.” Article 2(1) further stipulates that “[...] Parties aim to reach global peaking of greenhouse gas emissions as soon as possible, recognizing that peaking as soon as possible [...] and to undertake rapid reductions [...] in the context of sustainable development.”

In the occupied Palestinian territory under Israel’s colonial rule, the exploitation of Palestinian solar energy, complemented by the arbitrary and unlawful demolition and confiscation of Palestinian initiatives to exploit in a sustainable manner their natural resources, have played a significant role in the entrenchment of Israel’s domination over the Palestinian people. Israel boasts itself of being at the cutting edge of sustainable development, including of solar energy, while exploiting unlawfully appropriated Paletinian natural resources, and denying the Palestinan people of their disposal and governance thereof.

Under international law, Israel, the Occupying Power, is considered a mere trustee of the Palestinian people’s natural resources. Article 55 of the Hague Regulations prohibits the exploitation of natural resources in the occupied territory, unless to provide for the needs of the civil population.[12] By confiscating lands in Area C to exploit solar energy, for the benefit of its unlawful settlers and their economy, while demolishing any Palestinian solar structure, Israel infringes on the Palestinian people’s right to self-determination, a well entrenched principle of customary international law.

The development of sustainable sources of energy in the overarching context of climate change should place peoples at the core, as the primary guardian of their lands, and of their natural wealth.

[4] Crystal Yeung, “The Sun Belongs to Everyone: Israeli Demolitions and Confiscations of Solar Panel Aid Projects in Area C of the West Bank” (Al-Haq: 2018), 4, https://www.alhaq.org/cached_uploads/download/alhaq_files/publications/The_Sun_Belongs_to_Everyone.pdf

[9] Crystal Yeung, “The Sun Belongs to Everyone: Israeli Demolitions and Confiscations of Solar Panel Aid Projects in Area C of the West Bank” (Al-Haq: 2018), 4, https://www.alhaq.org/cached_uploads/download/alhaq_files/publications/The_Sun_Belongs_to_Everyone.pdf