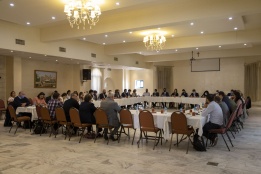 The diplomatic briefing witnessed a strong attendance by diverse representative offices, who engaged with representatives of the six targeted organisations: Addameer Prisoner Support and Human Rights Association, Al-Haq Law in the Service of Man (Al-Haq), Bisan Center for Research and Development, Defense for Children International-Palestine (DCI-P), the Union of Agricultural Work Committees (UAWC), and the Union of Palestinian Women’s Committees (UPWC).

General Director of Al-Haq, Shawan Jabarin, explained that the attack comes within institutionalised efforts to silence and shrink Palestinain civil society space, noting that: “the attack comes in the aftermath of Israel’s failure to dry the resources and shut Palestinian civil society organisations down, specifically given the ongoing support by the civil society groups’ partners”.

Mr. Jabarin conveyed a staunch message of steadfastness to the diplomatic missions emphasising that the work of Palestinian civil society and human rights defenders is not a job, but a conviction that cannot be repressed. He relayed that, “Israeli authorities can drain the resources of Palestinian civil society organisations. They can shut our offices down. They can criminalise us and take us to courts. They can arrest us, but they will not silence us. We will build offices in prisons and continue to do our work towards the rule of law, justice, and accountability”.

Mr. Jabarin reminded the diplomatic missions that this is a political decision that also falls under Israel’s annexation policies by extending the application of Israeli domestic laws into the occupied territory. The designations further serve to undermine the legitimacy of the Palestinian Authority given the registration of the six targeted organisations under Palestinian law.

In summation, Mr. Jabarin emphasised the role of the partners of the Palestinian civil society, especially the European Union, as the main donor, reminding the attendees that “what [Israel] is doing is against the values of any democratic society”, and asking them: “which direction would you like to take? to accept this, or to counter this? If you believe in the role of the Palestinian civil society and Palestinian rights and struggle, it is time to condemn and send strong messages and take action”.

General Director of Addameer, Sahar Francis, emphasised that Israel has long been targeting Addameer for its crucial role in offering legal support to Palestinian political prisoners for three decades, and stated that the latest attack comes after Israel’s failure to handle the information, facts, and evidence that Palestinian human rights organisations document, gather, and submit to international platforms, including the International Criminal Court and the United Nations.

Ms. Francis confirmed that the six targeted organizations never received any official notification of this decision. She warned the attendees of the serious ramifications of Israel’s domestic Anti-Terrorism Law of 2016 - which is being applied for the first time in the occupied Palestinian territories - as it is vague in its definitions and procedures, and not in line with international human rights standards.

Ms. Francis further urged the diplomatic presence not only to raise their voices in solidarity with Palestinian civil society organisations, but also to inform their foreign ministries, especially those who believe the Israeli narrative, to take concrete measures and to refer to the targeted organisations about the legal facts.

Fouad Abu Saif of the UAWC explained that UWAC has been under Israeli attack for more than 10 years. Mr. Abu Said explained that the latest escalated attacks aim to stop the work of UAWC, which, since 1986, has been to support thousands of Palestinian farmers, specifically in Area C. He urged the diplomatic community to support Palestinian civil society, stressing that their voices should be louder than any time before. Mr. Abu Said concluded by reaffirming the steadfastness of UWAC staff and their commitment to continue supporting Palestinian farmers as mandated by national and internationl laws.

Ubai Al-Aboudi, the Executive Director at Bisan Center for Research and Development, confirmed that the Palestinian civil society organizations are being attacked for simply documenting and doing human rights work in Palestine, carried out according to international law in the most transparent way possible. He added: “the Israeli attack on Palestinian civil society is twofold: it is an attack on the basic idea of having a distinctive and independent civil society that criticizes Israel. This is also an attack on you [States, including European States], as we receive funding from your governments. They are basically saying that our partners have been funding terrorism for the past 30 years.”

He further reiterated the need to take action now against this political decision, as nonaction today means that “in two months there won’t be a Palestinian civil society”. Mr. Al-Aboudi reminded that the criminalization of civil society work is comparable to that previously taken by the Apartheid government in South Africa, and now the same is being adopted by an Israeli far right government.

General Director of DCI-P, Khaled Quzmar, whose offices were raided and ordered to close by Israeli Occupying Forces (IOF) last July, explained the unjust Israeli system that binds any attempt to challenge Israeli decisions by Palestinians to failure. Mr. Quzmar explained that Israeli law does not confer a disclosure obligation on the Israeli judicial authorities, thereby denying affected Palestinians a fair chance to challenge the Israeli allegations. He further clarified that in the DCI-P case, as in other cases, the Israeli courts rule in favour of the Military Attorney General’s requests and even more than what is requested, which is illegal under any judicial system in the world. He concluded by emphasizing that should the targeted Palestinian organizations decide to appeal this designation decision, it is to show the world how unjust and unfair the Israeli judicial system is.