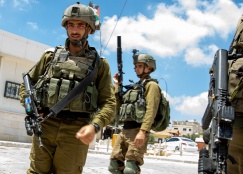 On 30 July 2021, David Mivasair and Khaled Mouammar (the complainants) submitted a legal complaint to the Compliance Division of the Charities Directorate of the Canada Revenue Agency (CRA), to request an audit of the Canadian Zionist Cultural Association (CZCA), under well-grounded allegations that it may be directly or indirectly providing funding to the Israeli military. Al-Haq joined the submission by highlighting evident and systematic breaches of international law in the course of the Israeli military operations, which resulted in serious war crimes and crimes against humanity.

The CZCA presents itself as an educational and charitable organization “operat[ing] camps for widows, orphans, siblings and parents of fallen soldiers and provides scholarships for former soldiers.” Registered as a charity, the CZCA receives tax-exempt donations to finance its activities. The complainants collected compelling information to suggest that the CZCA collaborates closely with the Association for the Soldiers of Israel – Canada (ASI-Canada).ASI-Canada calls itself “the only non-profit organization in Canada supporting the wellbeing of Israeli soldiers on active duty”. Both organizations are listed as partners of YAHAD-United for Israel’s Soldiers (YAHAD) – a group that provides financial support to the Israeli military by covering its service and infrastructure costs. Until immediately before the complaint was filed, the Israeli military even stated on its own website that the Canadian Zionist Cultural Association is authorized to raise donations for it.

A Canadian charity providing financial support to a foreign military would violate Canada’s Income Tax Act. The complaint stated that, in 2019, the CZCA supplied Yahad with donations amounting to $1,789,423. The complaint also alleges that the CZCA’s activities appear to contravene the public benefit requirement enshrined in the CRA policy guidance, and Canadian public policy more generally. The complainants are therefore requesting an audit of the CZCA by the Canada Revenue Agency to confirm the allegations and, if confirmed, to proceed with the revocation of the CZCA’s charitable status.

In the complaint, Al-Haq underlined gross, continuous and systemic violations of international humanitarian and human rights law perpetrated by the Israeli military. Between June 2014 and June 2021, 3,395 Palestinians were killed by the Israeli military forces - 2,941 in the Gaza Strip and 435 in the West Bank, including 804 children. At least, 104,486 Palestinians have been injured over the same time period, mostly as a consequence of tear gas inhalation, rubber bullets, live ammunition, tear gas canisters, physical assault, and air-launched and surface-launched explosive weapons. Al-Haq’s field experience and research has demonstrated throughout the years that the Israeli military has consistently employed policies and practices amounting to war crimes and crimes against humanity under the Rome Statute of the International Criminal Court, and notably: intentional and incidental attacks against civilians and civilian buildings, wilful killings, systematic and widespread use of torture and ill-treatment against Palestinians, suppression of resistance through arbitrary arrest and detention, and the participation in multiple policies of forcible displacement against Palestinians, including administrative and punitive demolitions of civilian property.

Al-Haq commends the initiation of the complaint, which addresses the essential and urgent question of tax-exempt status for organizations supporting the Israeli illegal enterprise in the occupied Palestinian territory. Such tax-free incentives drive foreign taxpayers to indirectly subsidize the Israeli military or Israel’s settlement enterprise. Legal proceedings aimed at identifying and revoking the tax-exempt status of such entities is a fundamental and imperative step to alleviate third state complicity with Israel’s international crimes.