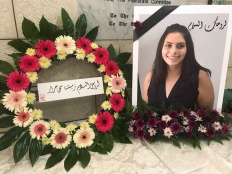 Today, Al-Haq sent dozens of letter to Third States and to the International Committee of the Red Cross (ICRC), calling for the urgent, immediate and unconditional release of Khalida Jarrar to attend her daughter, Suha Jarrar’s funeral.

On 11 July 2021, Suha Jarrar, 30 years old, a senior legal researcher and advocacy officer with Al-Haq human rights organization and daughter of Gassan and Khalida Jarrar, was unexpectedly found dead in her apartment near the Palestine Medical Complex, Ramallah, Palestine. She had been serving Al-Haq as a human rights advocate before the United Nations treaty-bodies and the Human Rights Council since February 2017, specializing in gender, environment and climate change.

Suha’s mother, Khalida Jarrar, is a Palestinian civil society leader, lawmaker, and human rights activist who calls for women’s rights and for the realization of Palestinians’ rights. Khalida Jarrar has been constantly and systematically harassed and targeted by the Israeli occupying authorities for her human rights work.

Khalida Jarrar was initially detained on 31 October 2019, when 12 Israeli military vehicles surrounded her house in Al-Bireh, and around 20-armed Israeli Occupying Forces raided the house at approximately 3:00 am. On 1 March 2021, Ofer military court sentenced Khalida to 24 months in prison and a NIS 4,000 fine. During the hearing session, the military prosecutor amended Khalida’s indictment, limiting it to her political role and work with the Palestinian Authority. Further declaring that there are no charges against her relating to affiliation to any military, financial nor organizational activities. Khalida is currently held at Damon prison, serving a two-year sentence and is due to be released this coming September.

Al-Haq called on representatives of Third States and on the on the ICRC to immediately and urgently intervene to exercise the authority and associated with its mandate, to secure the immediate and unconditional release of Khalida Jarrar by the Israeli authorities, on humanitarian grounds so that she can attend the funeral of her daughter, and mourn in human dignity. There is currently an autopsy underway at Abu Dees and there will be a funeral on Tuesday 13th at the latest.

Khalida’s work, both domestically and internationally, towards advancing human rights, democracy and the rule of law, poses upon us a moral and professional obligation to urgently intervene using our network to pursue pressure on the Israeli authorities to secure her immediate and unconditional release on humanitarian grounds. Al-Haq extended the appeal in to Third States and the ICRC that are committed to promoting and ensuring respect for international humanitarian law, promoting human rights, democracy and the rule of law, as Suha did, and as Al-Haq and Khalida continue to do.