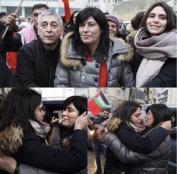 Khalida Jarrar, a Palestinian civil society leader, lawmaker, and human rights activist who calls for women’s rights and for the realization of Palestinians’ rights, notably the Palestinian right to return, has been constantly and systematically harassed and targeted by the Israeli occupying authorities for her human rights work, especially in her leading role with regards to work related to the International Criminal Court (ICC).[1] Khalida is currently held at Damon prison, serving a two-year sentence.[2]

From 1994 to 2006, Khalida served as the General Director of Addameer Prisoners’ Support and Human Rights Association, a Palestinian non-governmental, civil society organization that works to support Palestinian political prisoners held in Israeli and Palestinian prisons. Since then, she became a member of the Board of Directors of Addameer, serving on the board until late 2017.

In 2006, Khalida was elected as a member of the Palestinian Legislative Council (PLC) and has been the head of the Prisoners Commission of the PLC since then. As a member of the Palestinian National Committee for the follow-up of the ICC, Khalida actively contributed to formulating Palestine’s application to the ICC, as she was tasked with bringing cases regarding past and present possible war crimes by Israel, along with other human rights violations against Palestinians in the occupied Palestinian. Khalida is also the Palestinian representative on the Council of Europe, an international organization working towards advancing human rights, democracy and the rule of law.

Khalida was first detained by the Israeli occupying forces in 1989 on the occasion of a Women’s Day demonstration for one month without trial. She was subsequently detained three additional times, for an accumulated period of 57 months: from 2 April 2015 to June 2016, from 2 July 2018 to 28 February 2019, and since 31 October 2019. Furthermore, Khalida was issued a travel ban since 1998, which was only lifted once in 2010 to enable her to seek medical treatment in Jordan. On 20 August 2014, she was ordered by the Israeli military to forcibly transfer to Jericho for a period of six months, on the basis of so-called security threat, finally reduced to one month.

Most recently, Khalida Jarrar was detained on 31 October 2019, when 12 Israeli military vehicles surrounded her house in Al-Bireh, and around 20-armed Israeli Occupying Forces raided the house at approximately 3:00 am. On 1 March 2021, Ofer military court sentenced Khalida to 24 months in prison and a NIS 4,000 fine. During the hearing session, the military prosecutor amended Khalida’s indictment, limiting it to her political role and work with the Palestinian Authority. Further declaring that there are no charges against her relating to affiliation to any military, financial nor organizational activities.13

On 19 March 2021, Al-Haq Law in the Service of the Man, Addameer Prisoner Support and Human Rights Association, Al-Mezan Center for Human Rights, and Cairo Institute for Human Rights Studies submitted an urgent appeal to the United Nations Special Procedures notably addressing Israel’s arbitrary arrest and imprisonment of Khalida Jarrar, serving her fourth prison term based on her political role and work with the Palestinian Authority. Khalida is currently due to be released within two months.

On 11 July 2021, Suha Jarrar, 30 a senior legal researcher and advocacy officer with Al-Haq human rights organization and daughter of Gassan and Khalida Jarrar, was unexpectedly found dead in her apartment near the Palestine Medical Complex, Ramallah, Palestine. She had been serving Al-Haq as a human rights advocate before the United Nations treaty-bodies and the Human Rights Council since February 2013, specializing in gender, environment and climate change.

Al-Haq calls on the UN Special Procedures to immediately and urgently intervene to exercise the authority associated with their mandate, to secure the immediate and unconditional release of Khalida Jarrar by the Israeli authorities, on humanitarian grounds so that she can attend the funeral of her daughter, and mourn in human dignity.

Israel as the Occupying Power is obliged to respect the “family rights” of the protected population, “their religious convictions and practices, and their manners and customs” under Article 27 of the Fourth Geneva Convention. Article 75 of Additional Protocol 1, established as a fundamental guarantee that persons in the power of a Party to the conflict are “treated humanely in all circumstances”, which is reflective of customary international law.

The right of a mother to attend her daughters funeral is a cornerstone of human dignity. Respect for human dignity is fundamentally entrenched in the Universal Declaration of Human Rights (UDHR), whose preamble states that “[...] recognition of the inherent dignity and of the equal and inalienable rights of all members of the human family is the foundation of freedom, justice and peace in the world [...].” While Article 1 of the UDHR re-emphasizes that “all human beings are born free and equal in dignity and rights”.

With specific regard to persons deprived of their liberty, Article 10(1) of the International Covenant on Civil and Political Rights (ICCPR) underlines that they “shall be treated with humanity and with respect for their inherent dignity of the human person.” The Human Rights Committee (HRC), in its General Comment No.21 on Article 10, specifies that the right to human dignity must be ensured to detainees and prisoners “under the same conditions as for that of free persons”.

In addition to a denial of the right to dignity, it is submitted that by preventing Khalida Jarrar from attending her daughter’s funeral in light of her tragic and unexpected death, may cause mental suffering constituting a form of cruel, inhuman or degrading treatment as per Article 7 of the ICCPR, and reiterated by the HRC’s General Comment No.20 on Article 7.

Al-Haq therefore calls on the mandate holders to:

Work expeditiously to ensure from the Israeli authorities the immediate and unconditional release of Khalida Jarrar, so that she can attend the funeral of and mourn in dignity, her late daughter, Suha Jarrar;

Noting that in Islamic practice, funerals take place very closely after the deceased has passed, with the funeral of Suha Jarrar expected as early as Tuesday 13 July 2021. It is therefore imperative that the mandate holders intervene swiftly as a matter of urgency;

To make every effort to bring Israel, the Occupying Power, into compliance with its obligations under international humanitarian and human rights law.

[1] Journal of Palestine Studies, “Interview with Khalida Jarrar: The Israeli Occupation Must End,” 1 May 2017, available at: https://online.ucpress.edu/jps/article-abstract/46/3/43/54597/Interview-with-Khalida-JarrarTheIsraeli?redirectedFrom=fulltext.