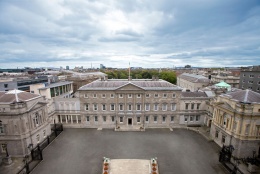 On 25 May 2021, Al-Haq sent letters to 160 members of the Irish Parliament (Dáil Éireann) urging their full support for the Annexation Motion, which will be voted on at 9:30 pm on Wednesday 26 May. The hostilities seen in Gaza over the past few weeks are rooted in the continuing Nakba, the de jure and de facto annexation of Palestinian lands, and Israel’s institutionalized regime of racial discrimination and domination over the Palestinian people as a whole, amounting to apartheid.

Over the two weeks, the Palestinian Ministry for Health in Gaza has documented the killing of 248 Palestinians in addition to the injury of 1,900 during the course of Israel’s 11-day military offensive on the Gaza Strip. The escalation is a direct result of Israel’s impunity for the continued de facto annexation of Palestinian land and its denial of the collective right of self-determination of the Palestinian people as a whole, including Palestinians refugees and exiles in the diaspora, and the continuing denial of their right of return to their home land, as acts of collective punishment.

Al-Haq encouraged Irish Parliamentarians to address the root causes of the prolonged occupation. Further that Ireland should support the de facto annexation motion in order to meet its international legal obligations as a Third State under general international law and the Geneva Conventions, of non-recognition of an internationally wrongful act of de factoannexation, including Ireland’s obligations to not render aid or assistance in the maintenance of that internationally wrongful act and to send a signal to the world over that Ireland is a strong defender of Palestinian human rights. Al-Haq has called for Ireland to continue its long-standing friendship with the Palestinian people and to stand up for the rule of law in the face of oppression and colonization regardless of perpetrator.

In addition, Al-Haq submitted its recently published Q&A on “Israel’s De Facto Annexation of Palestinian Territory” for further information on the law governing de facto annexation.  The Q&A explains how since 1967, Israel’s parliament (the Knesset) has increasingly extended its sovereign authority over the West Bank, through legislative acts, in breach of its limited administrative authority as a belligerent occupant, and amounting to de facto annexation. In addition, it examines violations of international humanitarian law amounting to war crimes and crimes against humanity by Israel as Occupying Power which together may be considered as establishing a pattern of permanent measures amounting to de facto annexation.

In addition to non-recognition of the illegal annexation and support for the coming Motion, Al-Haq also recommends that the Republic of Ireland:

(1) take concrete and immediate steps to prohibit the importation of settlement goods and services and progress, and adopt without further delay, the Occupied Territories Bill;

(2) halt any and all military aid to Israel

(3) adopt countermeasures and sanctions to ensure annexation is deterred as was done toward the Russian Federation in light of its annexation of Crimea and Sevastopol;

(4) support the annual update of the UN Database on businesses operating in illegal Israeli colonial settlements;

(5) fully support the investigation of the Prosecutor of the International Criminal Court into the Situation in Palestine; and

(6) to use its seat on the UN Security Council and its forthcoming Presidency of the Security Council to address the root causes of the prolonged occupation of Palestine, including de facto annexation and apartheid.

Al-Haq calls on Ireland to stand up in defense of human rights to be a beacon for the world to follow. The heart-breaking atrocities that we see in Palestine will only end when its root causes are dealt with. We call on Ireland to take the first of many steps required to stop and reverse the annexation of Palestinian territory and work to ensure the collective right to self-determination of the Palestinian people and the right of return of Palestinian refugees and exiles to their homeland.