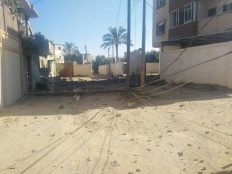 On the 11th day of the Israel’s military offensive on the Gaza Strip, and while Israel and Hamas announced a ceasefire taking effect as of Friday 21 May 2021, 2:00 am, the Israeli Occupying Forces indiscriminate and systematic raids on Gaza continues to target more civilian residential properties, agricultural lands, and road infrastructures.

Al-Haq documented the Israeli Occupying Forces (IOF) relentless daily aerial bombardments across the entire Gaza Strip, in addition to shelling both from IOF tanks stationed behind the border, and IOF gunboats stationed at sea, placing the densely populated Gaza Strip and its mostly civilian population, under danger of direct and indiscriminate attack.

20 May 2021: Al-Haq Documentation Continues from the Previous Bombardments

On 20 May 2021, Al-Haq documented the killing of Yahya Muhammad Subhi Al-Hadidi, 10, along with his mother and his three siblings, in the bombing of Alaa Abu Hatab’s house, without prior warning some days previously, on 15 May, at 1:30 pm, next to the Al-Sousi Mosque, Al-Shati refugee camp, west of Gaza City. Civil defense teams are still searching for missing people, and at the time of reporting, the casualty toll has reached nine civilians, including:

On 20 May 2021, Al-Haq reported that the death of a previously unknown civilian, killed during the Israeli bombing of the fifth floor of the Zoroub building, center of Gaza City, the previous day, had since been identified as Hosni Muhammad Ali Salem, 22. His body had been reduced to pieces due to several burns that concealed the features of his face.

On 19 May 2021, Aysar Abdel Rahim Taha Al-Halabi, 48, was reported killed by suffocation, at Al-Shifaa Hospital, Gaza City, after the bombing of a tunnel in an unknown location.

19 May 2021: Destruction of Civilian Properties, Leading to Civilian Deaths

At least three civilians were killed as a result of the Israeli Occupying Forces’ targeting of residential units:

At the same time, the IOF targeted a number of residential units, some of them inhabited by large extended families, including children, without causing any casualties:

Agricultural Lands. On 19 May, at noon, an Israeli aircraft bombed an agricultural land in the Al-Mashaleh neighborhood in Deir Al-Balah, injuring one civilian. At 16:10 pm, on the same day, Israeli Occupying Forces bombed towards agricultural lands east, of the village of Juhr Al-Deek, south of Gaza City, killing Hassan Sami Al-Borno, 63, while he was on his agricultural land.

Public Transport Vehicles. At approximately 9:00 pm on 19 May, an Israeli warplane bombed a public transport truck belonging to Abdullah Jamal Muhammad Darwish, 33, while it was parked near his home in Ard al-Najjar in Camp 2, West of Nuseirat camp, severely damaging the truck, damaging the windows of another bus transporting passengers as well as several houses around the site.

School. The following day, at around 7:30 am, on May 2021, a missile landed in the vicinity of Al-Nasr Islamic Model School, located near Al-Nasr Children's Hospital, and Al-Ayoun Hospital, northwest of Gaza City, and the bombing caused partial damage to the school's sports field.

Road Infrastructures. On 20 May 2021, at approximately 2:30 am, the Israeli warplanes bombed the main road on Jabalia Camp, with two missiles, which separates Block 7 and Block 9, located in front of Safi building materials stores in Jabalia camp. The bombing wounded 7 civilians, including 3 women and one child, and damaged many residential homes and infrastructures. The occupation warplanes simultaneously bombed the main street in the Al-Saftawi neighborhood near Al-Saftawi Junction, causing severe damage to the place, and destroying the asphalt road and parts of the sewage networks in the place.

Factories. At dawn on 20 May, IOF tanks and vehicles stationed behind the borders east of Gaza City, with a number of artillery shells, randomly targeted different areas of Gaza City. They bombed several civilian properties including two factories – the Foam Line Factory for the manufacture of cork dishes and Al-Sawafiri factory for home furniture, located east of Gaza City, as well as three residential units and the Al-Nasr Islamic Model School. [For more attacks on commercial property see Attacks on Business Properties by Israel’s Offensive in Gaza: Sweeping and Indiscriminate Destructions Designed to have an Enduring Economic Effect]

The 11th day of the Israeli Occupying Forces’ offensive on Gaza reveals a pattern of indiscriminate and systematic attacks on civilian properties, most of them residential units inhabited by large families.

During the conduct of hostilities, Israel must comply with the principle of distinction between civilian and military objects, as per Article 48 of the First Protocol to the Geneva Conventions, as well as the prohibition of indiscriminate attacks “which may be expected to cause incidental loss of civilian life, injury to civilians, damage to civilian objects, or a combination thereof, which would be excessive in relation to the concrete and direct military advantage anticipated” as per Article 51(5)(b) of the First Protocol to the Geneva Conventions, also considered as customary law.

As a ceasefire announces the end of open hostilities, Israel has to take responsibility for its numerous violations amounting to war crimes and crimes against humanity. Al-Haq urges the international community to take immediate concrete and effective measures to bring Israel in compliance with its obligations to spare and protect the Palestinian civilian population. Al-Haq also calls on the Prosecutor of the International Criminal Court to include Israel’s 2021 military offensive on the Gaza Strip into the scope of its investigation for war crimes and crimes against humanity.