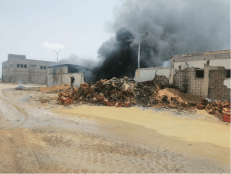 Since 10 May 2021, Israel’s military offensive on the Gaza Strip has cost a devastating human toll. As of 20 May 2021, 6:00 pm, the Palestinian Ministry of Health in Gaza reported 232 Palestinian casualties, including 65 children, and 1,900 injuries.[1]Al-Haq’s field reports have documented the indiscriminate and systematic attacks of the Israeli Occupying Forces (IOF) in the carrying of ariel bombings over the Gaza Strip, targeting high rise tower blocks, residential buildings, commercial properties, administrative institutions, cultural and religious centers, banks and agricultural lands.

Economy has long been the sinews of war. Whether by directly targeting business sites, or by causing collateral damage to commercial properties, the Israeli Occupying Forces (IOF) seizes the opportunity to deeply and sustainably affect the Palestinian economy already on the fringe of collapse. More than 80 percent of Palestinians depend on international aid, without alleviating a continuing cycle of poverty – with a poverty rate above 50 percent in 2017, food insecurity, lack of drinkable water and inadequate healthcare.[2] Meanwhile, the Gaza real per capita gross domestic product (GDP) dropped by 29 per cent in 2019 compared to 2006 – “The precipitous deterioration prompted the United Nations to warn that Gaza might become unliveable by 2020”.[3] 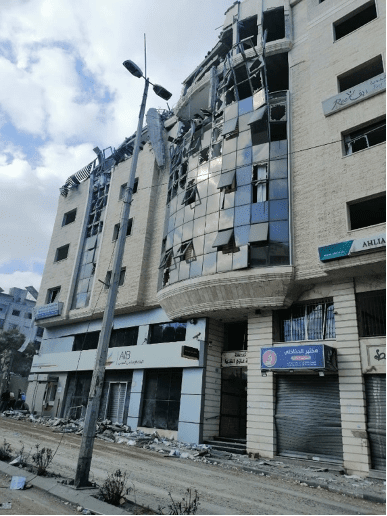 A certain number of financial businesses, including different branches of the Islamic National Bank and the Palestinian Production Bank, have constituted direct military targets by the Israeli Occupying Forces:

Large-Scale Destruction of Al-Rimal Neighborhood, will have Long Term Impact on the Socio-Economic Viability of Gaza City

Significantly, from 11 May 2021, the Israeli Occupying Forces initiated a series of systematic and violent bombing blasts on Al-Rimal neighborhood, one of the most vibrant neighborhoods of Gaza City, and an essential commercial artery. The successive bombings caused the death of 43 civilians, including 18 children, as of 17 May 2021. 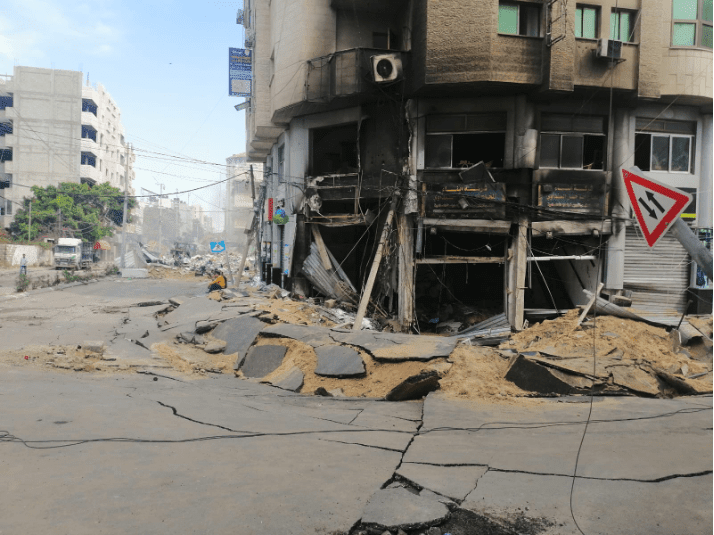 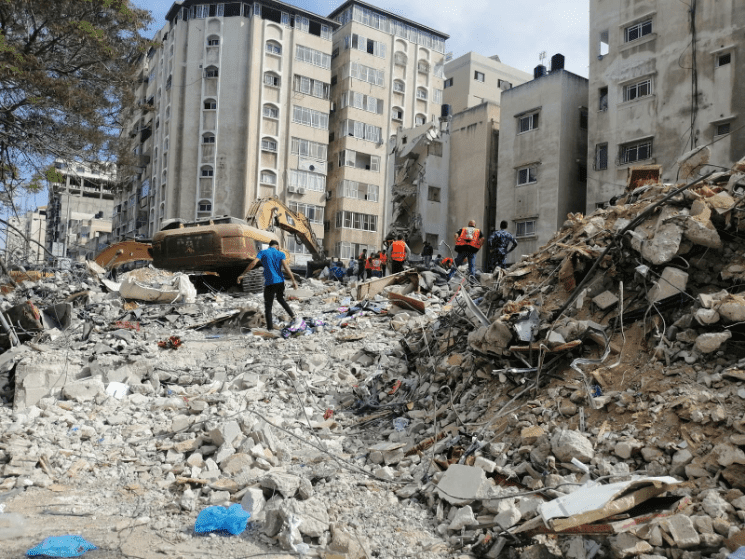 The demolition of Al-Shorouk tower, and the crippling of its adjacent, most vital, Omar Al-Mukhtar Street, will severely impact the long term dynamism of Al-Rimal neighborhood, which is one of the most famous neighbourhoods in Gaza City.

Yet, since the launch of Israel’s offensive on Gaza, Al-Haq has reported a consistent pattern of the destruction of business properties as military targets. Civilian business facilities have been treated as direct military targets, or have undergone significant collateral damage as a result of bombardments affecting surrounding structures and infrastructure.

As per Article 52(2) of the 1977 Additional Protocol I, supported by customary law, “military objectives are limited to those objects which by their nature, location, purpose or use make an effective contribution to military action and whose total or partial destruction […] offers a definite military advantage.” [7]

To qualify as a military object, an object must comply with two requirements:[8]

An object is used for military ‘purpose’ if they are used by the armed forces. However, Article 52(3) of the 1977 Additional Protocol I holds that “in case of doubt” that a civilian object “is being used to make an effective contribution to military action, it shall be presumed not to be so used.” [9]

Nonetheless, the destruction of a civilian object should still offer a ‘definite,’ military advantage in contrast to ‘potential or indeterminate advantages,’ based on relevant information.[10] The definite military advantage must be concrete, direct and assessed for every single military objective.[11]

Most of the targeted business properties do not correspond to any of these categories. They do not offer any effective contribution to military action per se. Their location in civilian centers do not render their destruction important in the conduct of hostilities.

Even where commercial premises are for arguments sake, located in buildings occupied by resistance forces, or may make a substantial contribution to the resistance, as in the case of financial institutions, the principle of precaution would still prevail. The Israeli Occupying Forces still need to demonstrate and provide sound evidence that their strategic targets respond to one of those categories that would offer a definite military advantage.

On the contrary, field reports and documentation highlight without any doubt the carrying out of indiscriminate attacks on civilian buildings that notably host businesses. Under Article 51(4)(a) of Additional Protocol I, supported by customary law, indiscriminate attacks “which are not directed at a specific military objective […] and consequently […] are of a nature to strike military objectives and […] civilian objects without distinction” are prohibited.[12] In addition, respect for the principle of precaution in attack, enshrined in customary law, according to which “all feasible precautions must be taken to avoid, and any event to minimize, incidental […] damage to civilian objects”[13] would still prevail.  Under Article 58 of the 1977 Additional Protocol I, the military forces must endeavor to make any effort to “avoid locating military objectives within or near densely populated areas,” and to ‘protect […] civilian objects under their control against the dangers resulting from military operations.”[14] As made clear by Al-Haq documentation, and especially in the case of Al-Rimal neighborhood, the Israeli Occupying Forces have perpetrated indiscriminate attacks on civilian buildings, without due respect to the prohibition of indiscriminate attacks and the principle of precaution. Many business properties have been severely impacted, and even decapacitated, with a long term economic cost, further crippling the Palestinian economy in the Gaza Strip, in a manifest act of collective punishment. 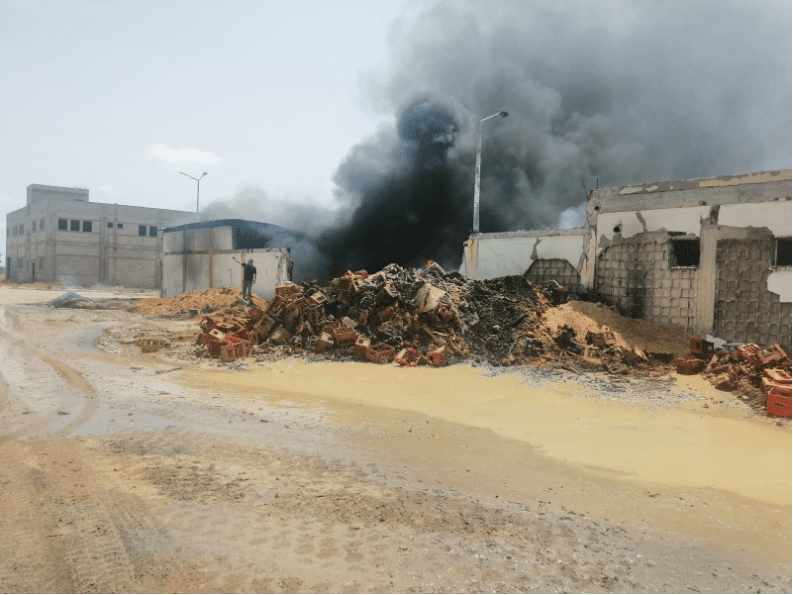 The targeting of business properties in the course of the IOF offensive on the Gaza Strip cannot be justifying under the well-enshrined principles of international humanitarian law. Rather, they form part of a broader strategy to permanently affect the viability of the Gaza economy, as well as the ability of the Palestinian people residing in Gaza to develop their economic capacities. It is in line with the overall colonial project that has been driving Israel’s policies and practices since its inception: that by weakening Palestine’s social, political, cultural and economic life, Israel intends to entrench its domination and fragmentation of the Palestinian people and their lands, continuing its inhumane acts of apartheid.

[1] Gaza Ministry of Health, 19 May 2021, https://www.moh.gov.ps/portal/two-hundred-and-twenty-seven-227-palestinians-have-so-far-been-killed/

[2] United Nations Conference on Trade and Development, Report on UNCTAD Assistance to the Palestinian People: Developments in the Economy of the Occupied Palestinian Territory, TD/B/67/5, 5 August 2020, paras.23-21, https://www.un.org/unispal/wp-content/uploads/2020/09/TD.B.67.5.pdf

[3] United Nations Conference on Trade and Development, Report on UNCTAD Assistance to the Palestinian People: Developments in the Economy of the Occupied Palestinian Territory, TD/B/67/5, 5 August 2020, para.51, https://www.un.org/unispal/wp-content/uploads/2020/09/TD.B.67.5.pdf