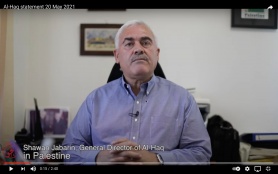 Addressing the international community, and its leaders, Shawan Jabarin, the General Director of Al-Haq, highlighted how the international community’s lack of political will to hold Israel to an account has allowed Israel to commit crimes against the Palestinian people as a whole. Israel’s colonial-apartheid regime, established and maintained since the Nakba of 1948, continue to deny the Palestinian people their inalienable collective rights, including the right to self-determination and to return.

In his message, Mr. Jabarin asserts that Israel’s lack of accountability, and the exceptionalism of the situation in Palestine will affect how Palestinians perceive international law, especially in the minds of the youth. As such, Mr. Jabarin urged that the international community to maintain the seeds of hope in Palestinian minds, through respecting and implementing their legal obligations under international law. Mr. Jabarin ended his message, asserting that “no peace without justice, and no justice without accountability.”

After the United States had blocked three of the UN Security Council statements, the UN General Assembly will hold, today, an additional, joint debate on agenda item 37, entitled “The situation in the Middle East,” and item 38, entitled the “Question of Palestine,” during its seventy-fifth session. Al-Haq provides that the root causes of the prolonged denial of Palestinian rights must be addressed. Al-Haq calls on the UN General Assembly and Member States to: