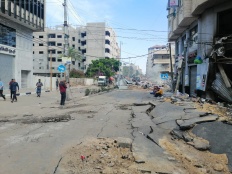 Since 12 May 2021, Al-Haq has documented widespread and systematic attacks on the Palestinian civilian population, and in particular Israeli Occupying Forces (IOF) have escalated attacks in the Gaza Strip. As of Sunday 16 May 2021, the Palestinian Ministry of Health has reported 164 killed, including 47 children and 1,050 wounded in Israeli military attacks on the Gaza Strip.[1]

This report covers the period from 12-13 May and is non exhaustive. From the beginning of hostilities and Thursday 13 May 2021, the Ministry of Health in the Gaza Strip documented the killing of 109 Palestinians, including 15 women and 28 children, and the injury of 621 Palestinians in the Gaza Strip. Al-Haq documentation from 12-13 May highlighted a number of separate IOF aerial bombardments across the Gaza Strip, with unnecessary, excessive and disproportionately high civilian casualties and the targeting of residential and commercial buildings. Throughout this two-day period, Al-Haq documented the killing of 31Palestinians including, 4 children, the youngest of whom was 11.

12 May 2021: 12 Civilians Killed in a Series of Indiscriminate Bombings

On 12 May, at 1:00 pm, while he was attending the funeral of Sameh Al-Mamlouk, Hamza Mahmoud Yassin Ali, 12, was hit by an Israeli reconnaissance plane targeting a motorcycle, near the Shijaiya cemetery, on Beltagy Street, east of Shajaiya, east of Gaza City. The missile wounded a number of civilians, including Hamza Mahmoud Yassin Ali. He was transferred to Al-Shifa Hospital, Gaza City, and succumbed to his shrapnel wounds, most of them concentrated in his abdomen, his feet, and hands, on 12 May.

On 12 May 2021, Israeli warplanes targeted a civilian car of the Peugeot brand, distributing gas pipelines to households, as it was passing near Al-Awda bakery, in Bani Suhaila, east of Khan Yunis. Majed Abd Rabbo Mahmoud Abu Saada, 38, and Mahmoud Ahmad Abu Amer, 37, were declared dead upon their arrival at Nasser Medical Hospital. A child, Muhannad Tayseer Abu Alyan, 15, wounded with shrapnel and burns, is in critical condition.

At approximately 4:20 pm on 12 May 2021, Hammad Ayyad Mansour al-Dabbari, 86, arrived at Abu Yusef al-Najjar Hospital, fatally wounded by shrapnel lodged in his head, as he was inside his house, next to Al-Sabreen Mosque. The circumstances of the incident are still being investigated, but coincided with the firing and interception of homemade Palestinian rockets from the Israeli Iron Dome system, and the firing of Israeli artillery shells.

At Al-Fokhari, southeast of Khan Yunis, on 12 May 2021 at around 5:30 pm, Israeli warplanes launched a missile near the Tamraz station, causing injuries to 2 civilians, including a child now in a critical condition. The two deceased children were Ammar Tayseer Ayesh al-Amor, 11 and Hamada Atiyyah Abed al-Amor, 13.

On 13 May 2021, at 1:10 am, Israeli warplanes launched no less than 20 rockets on houses inhabited by 15 families, comprising 85 people, including, 28 women and 29 children, on Beit Lahia street, center of Beit Lahia City, North Gaza. In total, 9 houses were completely destroyed, including rental houses, commercial companies, the office of Faten Credit Corporation, a law firm, an educational center, and shops. The street, water lines, sewage lines, electricity and communications networks were destroyed. A number of neighboring houses, including 6 residential buildings were severely damaged. 33 civilians were injured, including 8 women and 10 children. Two civilians are killed, Abd al-Rahim Muhammad Abdullah al-Madhoun, 62, and Halima Ali Muhammad al-Madhoun, 65, and 7 civilians were reported missing.

On 12 May 2021, around 1:50 pm, IOF warplanes launched two missiles, causing damage to the Beit Lahia military site, north of Beit Lahia, north Gaza. Israeli warplanes launched missiles on Palestinian resistance fighters while they were in a resistance tunnel. Forensic doctors announced 14 casualties, and stated that most of them died by suffocation and inhalation of toxic gases:

On 12 May 2021, at around 6:30 pm, Israeli warplanes targeted members of the Al-Quds Brigades in Nuseirat Camp, Central Governorate, injuring 2 and killing 4:

On 12 May 2021, other occurrences of Israeli occupying forces targeting site of the Palestinian resistance were reported, without causing any injuries, in southwest of Khan Yunis and in the Al-Farahin neighborhood, Abasan Al-Kabirah, east of Khan Yunis. The bombing continued on 13 May 2021 when Israeli warplanes launched missiles on the sites of resistance factions, with no injuries reported, in Beit Lahia, north Gaza, and Nuseirat Camp, central governorate.

On 13 May 2021, at 9:00 am, Israeli warplanes targeted a group of Palestinian resistance members in the Abu Taima neighborhood, Abasan, east of Khan Yunis, causing two injuries.

Between 11-13 May 2021, Israeli warplanes targeted a number of commercial and industrial sites, completely or partially destroying the units, and causing severe damages on vital infrastructures, with no injuries reported, including: factories in the Tel Al-Hawa neighborhood, west of Gaza City, the Galilee Ice Cream Factory located Street 10 near Kuwait Junction, southeast of Gaza City, Street 8 in front of the Alaeddin petroleum station in Tel Al-Hawa neighborhood west of Gaza City, Saraya Junction in Gaza City causing extensive damage to Omar Al-Mukhtar Street, and the Mazen Faqha soccer stadium.

On 12 May 2021, at around 12:45 pm, IOF warplanes launched two missiles at Spike Salon in Tal Al-Zaatar neighborhood, Jabalia, North Gaza, moderately injuring 4 civilians, including 2 children. At around 6:30 pm, IOF warplanes bombed and completely the 14-story Al-Shrouk Tower, containing dozens of offices, clinics, private companies, press and media institutions. The bombing caused the road blockade of one of the main streets in Gaza City, Omar Al-Mukhtar Street.

On 12 May 2021, at 10:50 pm, IOF warplanes destroyed the Islamic National Bank, a two-story building, located at the entrance of Al-Bureij camp, Central Governorate, causing damage to a number of neighboring houses, and injuring 3 civilians. On 13 May 2021, at 6:40 am, the Islamic National Bank was destroyed, Haydar Al-Agha Tower, near the Abu Hamid roundabout, Khan Yunis. About an hour later, the Islamic National Bank, located in the Doha building, Omar Bin Al-Khattab Street, Rafah, was bombed by an Israeli drone. 10 minutes later, an Israeli warplane launched a missile, leading to several material damage and moderate damage of a number of offices and nearby institutions.

On 13 May 2021, at 8:45 am, Israeli warplanes completely destroyed the Al-Walid building, consisting of 7 floors and containing 17 units, including a number of offices, companies, shops and flats. The bombing severely damaged a number of houses, shops and neighboring buildings.

In addition, on 10-13 May 2021, Al-Haq reported at least 13 occurrences when Israeli airplanes launched missiles on a number of residential units, with no injuries reported. In most attacks, one of the victims reported having received a call from the Israeli intelligence services asking to evacuate the building. In particular:

Between 12-13 May 2021, Al-Haq documented 13 attacks of Israeli gunboats targeting the Gaza shores of the Sudania area, west of Jabalia, north Gaza. At least 41 missiles were shot and no injuries were reported.

Between 11-13 May 2021, Al-Haq documented 28 attacks of Israeli warplanes on open grounds or agricultural landsthroughout the Gaza Strip, with no injuries reported. Two civilians, including a child, were moderately wounded, as an Israeli bombed an empty land in the Bir al-Naja neighborhood, west of Jabalia, north Gaza, at around 11:37 pm, on 12 May 2021.

In the conduct of hostilities, Israel, the Occupying Power, must abide by its obligations as per international humanitarian law. Israel’s indiscriminate and systematic targeting of civilian residential and commercial structures breaches the customary principle of distinction enshrined in Article 48 of the First Protocol to the Geneva Conventions. It further violates the prohibition of indiscriminate attacks “which may be expected to cause incidental loss of civilian life, injury to civilians, damage to civilian objects, or a combination thereof, which would be excessive in relation to the concrete and direct military advantage anticipated” as per Article 51(5)(b) of the First Protocol to the Geneva Conventions, also considered as customary law.