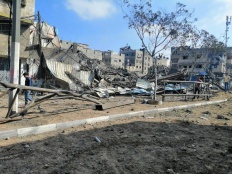 On 15 May 2021, Al-Haq sent an urgent appeal to United Nations Special Procedures highlighting the potential, imminent and inevitable collapse of vital sectors in Gaza, including the health, water, environment, sanitation due to attacks on electricity infrastructure and Israel’s refusal to permit imports of fuel into the Gaza Strip to supply the power plant. Al-Haq called for immediate and urgent international intervention to restore vital infrastructure and ensure adequate supplies of electricity required for the provision of critical public services.

Due to the shelling of civilian infrastructure, electricity lines in Gaza have been destroyed. On 13 May 2021, a statement issued by the Gaza Governorate Electricity Distribution Company warned of serious repercussions owing to the disruption of the Jabalia line supplying the northern Gaza Strip. Currently there are now only two of the four electricity lines out of service which supply 45 percent of the electricity to the Gaza Strip.[1] At the same time, Israel has prevented the entry of fuel shipments needed to operate the only power station in the Gaza Strip due to the closure of the Kerem Shalom crossing and the current fuel supply is now running out.

When the Gaza Power Plant stops working completely, this will lead to a serious and detrimental overburdening on the electricity sector, with the potential, imminent and inevitable collapse of vital sectors in Gaza, including the health, water, environment, sanitation and public services sector. The collapse of these sectors will affect two million Palestinians in the Gaza Strip. The current availability of electricity is estimated at about 125-110 megawatts, while the demand has reached about 400 megawatts, with a deficit of about 70 percent, which necessitates immediate and urgent international intervention to restore vital infrastructure and the supply of electricity required for the provision of critical public services.

Significant movement restrictions on patients and health workers already compromise Palestinians’ access to healthcare services. In November 2020, Medical Aid for Palestinians warned that “Gaza’s beleaguered health system” was “on the brink of collapse”.[2] While the electricity supply is almost halved the numbers of wounded are increasing, which will have significant impact on the capacity of the hospitals to provide medical care. Noting that as of 12:30 pm on 15 May 2021, the Palestinian Ministry of Health reported over 1,000 wounded as a result of ongoing airstrikes in the Gaza Strip.[3]