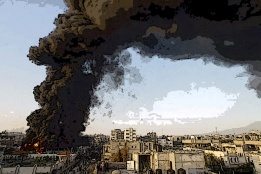 On 12 May 2021, Al-Haq sent an urgent appeal to the United Nations Special Procedures, urgently requesting immediate intervention to protect Palestinians, against whom Israel has intensified its serious violations of international law, in particular: systemic use of excessive force and indiscriminate targeting, collective punishment, arbitrary arrests, and condonement of settler violence.

In the Sheikh Jarrah neighbourhood of Jerusalem, the Israeli Occupying Forces (IOF) have repressed, with excessive use of force, peaceful assemblies of Palestinians supporting families under pending threat of forcible eviction by Israeli settler organisation, through Israel’s discriminatory and biased judicial system. Over the past week, the IOF have systematically suppressed demonstrations, through home raids, property damages, firing of tear gas canisters, sound bombs and skunk water, as well as arbitrary arrests. In the Al-Aqsa compound, Old City of Jerusalem, the IOF have continuously assaulted Palestinian worshippers with rubber bullets, tear gas canisters, and sound bombs. Paramedics were prevented from accessing the compound and were even directly targeted. In the Gaza Strip, the Israeli air force launched a series of missiles, restricted its imposed closure of the only two functioning crossings in and out, Erez and Kerem Shalom, and prohibited access to Palestinian waters for all naval activities. As of 11:40am of today, 12 May 2021, the Palestinian Ministry of Health in Gaza reported that 43 Palestinians, including 13 children, were killed, and at least 296 others were injured.

Addressing seven United Nations Special Rapporteurs, including the Special Rapporteur on the situation of human rights in the Palestinian territory occupied since 1967, Professor Michael Lynk, the urgent appeal specifically aimed attention at Israel’s repression perpetrated against Palestinians, in violation of fundamental rights and principles as enshrined under international human rights and humanitarian laws. Israel’s recent escalation of violence and oppression is reflective of its overall strategy to entrench its settler-colonial apartheid regime over the Palestinian people.

In the urgent appeal, Al-Haq requested the immediate intervention of the UN Special Procedures to protect Palestinians from Israel’s ongoing repression and excessive use of force against Palestinians in Jerusalem and indiscriminate targeting of Palestinians in the occupied Gaza Strip, and in particular to: