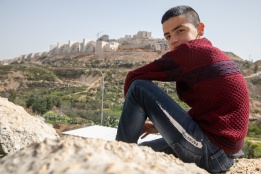 On 30 April 2021, the Palestinian Human Rights Organizations Council (PHROC); Cairo Institute for Human Rights Studies; and Habitat International Coalition – Housing and Land Rights Network submitted a joint submission to the United Nations Special Rapporteur on the situation of human rights in the Palestinian territories occupied since 1967, Mr Michael Lynk, laying out the framework for the illegality of Israeli colonial settlements, which are key to Israel’s settler-colonial and apartheid regime, and analysing their impact on the Palestinian people’s rights. The joint submission is pursuant to a call for input ahead of the Special Rapporteur’s report on the issue, which will be presented to the Human Rights Council in its 47th Session (21 June – 9 July 2021).

Placing Israel’s construction and maintenance of its colonial settlements within the broader context of its settler-colonial and apartheid regime, the joint submission addressed the legal status, and more specifically, the illegality, of such settlements. Considered to be a serious violation of international law,[1] as supported by the United Nations Security Council at least six times since 1979,[2] the submission further asserted that Israel’s colonial settlements contravene multiple provisions of the Rome Statute, including the prohibition of population transfer, annexation, and apartheid. Nonetheless, Israel continues to establish, maintain, and expand its settler-colonial enterprise, which serves to further de facto annex large parts of the West Bank, entrenching its regime over the Palestinian people as whole, on both sides of the Green Line, and Palestinian refugees and exiles abroad.[3]

The joint submission further addressed the impact of Israel’s colonial settlements on Palestinian rights by underscoring Israel’s unlawful policies and practices, including its discriminatory planning and zoning regime, movement restrictions, the pillaging of natural resources, and systematic failure to combat settler violence; allowing settlers to enjoy institutionalised impunity. These policies and practices, inter alia, hinder Palestinian livelihoods, obstruct the fulfilment of basic needs, and violate the Palestinian right to self-determination.

Finally, the submission called on the Special Rapporteur and all UN member states to condemn Israel’s settler-colonial and apartheid regime, recognise the role played by illegal Israeli colonial settlements and corporations in maintaining and expanding this regime, and to take meaningful and effective steps to address their negative impacts upon Palestinian rights, including by lending their full support to the Office of the Prosecutor, and the ICC more generally, in this endeavour, and refraining from all acts and omissions which may threaten its contribution to the fight against impunity, and struggle for accountability, for Palestinian victims of international crimes.