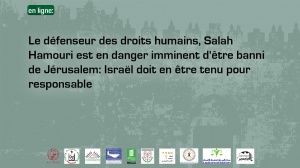 On Thursday 3 December 2020, Palestinian, regional and international civil society organisations held a joint webinartitled “HRD Salah Hammouri at Imminent Threat of Deportation from Jerusalem: Israel Must Be Held Accountable.”Co-sponsored by ten organisations,[1] the webinar constitutes a continuation of civil society’s efforts to highlight Mr. Hammouri’s case. It follows a diplomatic briefing on 21 September 2020, the submission of an urgent appeal to United Nations Special Procedures by 13 human rights organisations, and the delivery of an oral intervention during the 45thRegular Session of the Human Rights Council, on behalf of 56 Palestinian, regional and international civil society organisations.

On 3 September 2020, Mr. Hammouri was officially notified by the Israeli Ministry of the Interior of the intention to revoke his permanent Jerusalem residency for so-called ‘breach of allegiance’ to the State of Israel. Consequently, the 35-year-old Palestinian-French human rights defender and lawyer at Addameer Prisoner Support and Human Rights Association is at imminent risk of deportation

Moderated by Ms. Nada Awad, the International Advocacy Officer at the Cairo Institute for Human Rights Studies, the webinar was attended by Member States, representatives of the UN bodies, civil society, and human rights defenders. In her opening remarks, Ms. Awad contextualised the threat of having Mr. Hammouri’s residency status punitively revoked; putting this threat “within the wider context of the Israeli residency and land policies, aimed at altering the demography of the city of Jerusalem.” Ms. Awad further highlighted that, the deportation of Mr. Hammouri, if carried out, would constitute a war crime under the Rome Statue and a grave breach of the Fourth Geneva Convention.

Reflecting on the continued Israeli harassment against him and his family, Mr. Salah Hammouri, provided a comprehensive overview of the most recent Israeli tactic of intimidation against him – the intention to punitively revoke his residency status, and of previous tactics, including his previous arbitrary arrests, ban from entering the West Bank for almost 16 months, and the deportation of his wife, Elsa Lefort, a French national, separating him from his wife and son. Mr. Hammouri highlighted the risk of residency revocation experienced by Palestinians in the occupied and illegally annexed East Jerusalem, emphasising the danger of having residency revocation of former prisoners under “breach of allegiance” as a precedent.

In her presentation, Advocate Leah Tsemel, lawyer and legal representative of Salah Hammouri, provided an overview of the legal and historical development of residency revocation under the Israeli judicial system. Addressing the Combating Terrorism Law of 2016, Advocate Tsemel explained that “this law really describes ‘terror’… as almost anything - any action against occupation; so, it makes a very wide range of people who can be declared as those who break the loyalty to the State of Israel.” Overall, Advocate Tsemel explained the legal action that she, as Salah’s lawyer, along with HaMoked: Center for the Defence of the Individual, an Israeli civil society organisation, took before the Israeli judiciary system, while stressing on the importance of the support of the international community for Mr. Hammouri.

Addressing the Israeli policies targeting human rights defenders, Mr. Omar Shakir, Israel and Palestine Director at Human Rights Watch, analysed the attack on Mr. Hammouri, underlining that the attack is part of protracted and systematic Israeli policies and practices, designed to silence human rights defenders and civil society organisations. Reflecting on Mr. Hammouri’s case, and his own experience of being deported by Israel for his human rights work, Mr. Shakir highlighted that these two cases are ‘test cases.’ He further added: “[Salah’s case] is in some ways is new, but not new. But this idea of revoking permanent residency for Jerusalemites for breach of allegiance is an escalation.” As such, he stressed the need of advocating for Mr. Hammouri, so that this policy does not become the norm.

Highlighting the status of Palestinians in East Jerusalem, Professor S. Michael Lynk, the United Nations Special Rapporteur on the situation of human rights in the Palestinian territory occupied since 1967, explained that “the illegitimacy of this policy of cancelling the residency rights of East Jerusalemite Palestinians has resulted in entrenched discrimination, an impermissible system of unequal rights and hieratical status that has no place either in a modern democracy or in a territory under occupation.” With regards to Third State responsibility, Professor Lynk emphasised that the international community bears a special responsibility to ensure that Israel complies with its obligations as the Occupying Power, as stipulated by Common Article 1 of the Fourth Geneva Conventions. At the end, Professor Lynk stressed that “international law is not meant to be an umbrella that folds up at the first hint of rain.”

Placing the attack on Mr. Hammouri in the broader context of Israel’s institutionalised regime of oppression and apartheid, which entails policies of dispossession and fragmentation, including forcible transfer, and policies of silencing those who raise opposition of its unlawful practices, Ms. Shahd Qaddoura, Al-Haq’s Legal Researcher and Advocacy Officer, addressed how and why Israeli policies of residency revocation came to be. Immediately following the Nakba in 1948, Israel implemented the Entry into Israel Law of 1952, granting favoured treatment to Jewish immigrants under the Law of Return, while denying Palestinian refugees their right of return. Since 1967, Israel has created and consistently expanded the criteria for revoking the residency status of Palestinian Jerusalemites, including its “settling outside Israel,” and “centre of life,” policies, and lastly, revoking residency as a punitive measure.

Noting that “the Israeli judicial system is clearly complicit in the implementation of unlawful policies and practices which are in violation of international law, and further ensure the continued impunity of Israeli officials involved in violating the rights of Palestinians,” Ms. Qaddoura concluded her presentation by underscoring the urgency that the international community takes immediate, concrete and effective measures to hold Israel accountable for its human rights violations and to put Israel’s impunity to an end.

Finally, Ms. Anne Tuaillon, Vice President of Association France Palestine Solidarité, on behalf of French civil society organisations including the Plateforme des ONG Françaises pour la Palestine, shared an overview of France’s campaign opposing the unlawful deportation of Mr. Hammouri. Ms. Tuaillon urged the international community to mobilise against Israel’s apartheid policies and to stand in solidarity with the Palestinian people, through publicly condemning such policies and taking effective measures to end Israel’s impunity, including by imposing sanctions. Ms. Tuaillon further underlined that the child rights of Salah’s son must be protected, including the right to not be subjected to arbitrary interference with his privacy, family and home.

The criterion of allegiance to Israel, as an Occupying Power, is illegal. In fact, international humanitarian law explicitly forbids the Occupying Power from demanding allegiance from the occupied population, as provided in Article 45 Hague Regulations and Article 68(3) of the Fourth Geneva Convention. Accordingly, the Palestinian, regional and international civil society organisations, which co-sponsored the webinar, reassert their previous calls on the international community to address Israeli grave violations of international law, and to specifically:

Watch the webinar “HRD Salah Hammouri at Imminent Threat of Deportation from Jerusalem: Israel Must Be Held Accountable”