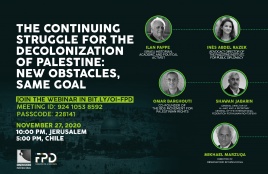 On 29 November 1947, the United Nations General Assembly recommended the partition of Mandatory Palestine into Arab and Jewish states in its Resolution 181(II). As the international community expresses solidarity with the Palestinian people on this commemorative day, it remains urgent to call attention to the current challenges posed by Israel’s gross human rights violations in the occupied Palestinian territories.

In partnership with the International Observatory of the Foundation for Democracy, Al-Haq participated in jointly hotsted Palestinian-Chilean webinar discussing challenges to the protection of the Palestinian people’s rights, in light of Israel’s ongoing human rights abuses within the context of the seven decades long colonization and apartheid. The webinar featured Shawan Jabarin, General Director of Al-Haq, Dr. Ilan Pappé, Director of the European Center for Palestine Studies at the University of Exeter, Inès Abdel Razek, Advocacy Director for the Palestine Institute for Public Diplomacy, and Omar Barghouti, co-founder of the Boycott, Divestment and Sanctions movement.

Changing the Narrative around the Palestine Question

The panelists underlined the urgency of situating Israel’s policies and practices in Palestine within the context of settler-colonialism whereby settlers seek to appropriate Palestinian lands while subjugating and replacing its indigenous people. Promoting a shift in the prevalent terminology around the Palestine Question is a seminal step in the pursuit of a just solution in Palestine. Recognizing decolonization as the appropriate framework to this end has certain implications such as the acknowledgement of continuing crimes against humanity perpetrated in 1948 towards the Palestinian people, the realization of Palestinian refugees’ right of return or the establishment of a democratic state in all Mandatory Palestine.

Recentering the dominant discourse around decolonization contributes to counter the Israeli strategy inherently aimed at depoliticising the Palestine Question and reducing it to an economic issue, therefore detracting attention from the ongoing furtherance of Israel’s settler-colonial project in Palestine. It is critical to counter the Israeli narrative that serves the normalization of its illegal practices and policies on the international stage, notably through the pursuit of the settlement enterprise or peace agreements with regional states.

It is equally important to confront the Israeli discourse that criminalizes Palestinian resistance - notably via allegations of antisemitism - and to promote the appropriate framework of analysis, that is international human rights and humanitarian law and international law frameworks, especially with regard to the Palestinian people’s right to self-determination. Turning a blind eye to human rights violations in Palestine not only emboldens Israel to pursue its colonial enterprise with impunity, but undermines the credibility of the international legal system as a whole.

The panelists expressed the importance of building an effective international solidarity movement that elevates Palestinian voices, within Mandatory Palestine or in the diaspora. Today 72 years of political failure have proved that liberation and justice for Palestine should be pursued under the impetus of civil societies in support of a united Palestinian movement to influence policy makers. To this affect Shawan Jabarin, Director of Al-Haq advcoated for a busisess and human rights approach to decolonisation, to ensure corporate accountability while emphasising the role of Third State responsibility, along with anti-apartheid Palestinian movements rooted in non violent resistance, to stimulate a global response against Israel’s violations in Palestine. Connecting global struggles for social justice, indigenous peoples’ rights and against global warming, or militarization of societies, with the Palestinian struggle makes the quest for justice in Palestine a quest for justice worldwide.

The recording of the webinar can be found here.