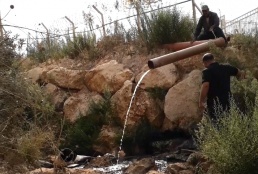 On 15 October 2020, Al-Haq participated in a consultation session organised by the Irish Coalition for Business and Human Rights. The consultation session comes as part of the Coalition’s Human Rights and Environmental Due Diligence Project, which aims at developing a policy paper and a draft legislation to call on the Irish Government to initiate legislation on mandatory human rights and environmental due diligence in Ireland in the Irish Parliament. The session included Ms. Mary Lawlor, Special Rapporteur on the situation of human rights defenders, as well as human rights defenders adversely affected by Irish and other corporations, including from Western Sahara, Guatemala, Colombia, Cambodia, the Philippines, and Sierra Leone, who presented on adverse human rights impacts that their communities face in relation to corporate activities, and contributed comments on the proposed legislation.

For its part, Al-Haq presented on corporations’ adverse impacts on the human rights of the Palestinian people, and their role in sustaining and strengthening the Israeli occupation. Al-Haq noted that the impacts should be understood within the context of Israel’s systematic violations aimed at forcibly transferring the Palestinian people and controlling their land and natural resources. Al-Haq highlighted how, given the inalienable rights of the occupied population to self-determination, including permanent sovereignty over natural resources an occupying power is prohibited from exercising sovereign rights over these resources.

The presentation noted that Israel’s colonial ambitions are exemplified in its policies and practices in the Occupied Palestinian Territory (OPT) such as appropriating Palestinian land, and establishing and expanding settlements. Israeli civilians are illegally permitted to sustain the settlement enterprise by exploiting and profiting from the rich natural resources of the area. Consequently, Palestinians are being subject to the war crimes of unlawful appropriation of property, forcible transfer, and pillage, and to aggravated discrimination amounting to apartheid, within the framework of which they are deprived of their right to adequate housing, right to water, right to freedom of movement, and their rights to development and self-determination.

Al-Haq noted that contrary to its obligation under the UN Guiding Principles on Business and Human Rights to protect against human rights abuse within their jurisdiction by business enterprises, Israel grants leases and licenses for the commercial exploitation of resources in the OPT. This facilitates an environment supporting the illegal existence and operations by business enterprises in the settlement enterprise.

Al-Haq welcomed the initiative by the Irish Coalition and proposed that the legislation include an explicit language on conflict-affected areas including occupation situations, specifically requiring a reference to the international humanitarian law framework, and the consequences of corporate activities on the right to self-determination and permanent sovereignty over natural resources in situations of occupation.

The presentation highlighted that because the risk of gross human rights abuses by corporations in conflict affected areas is heightened, the legislation should explicitly require businesses to conduct a mandatory enhanced human rights due diligence, specific to conflict-affected areas, encompassing more urgent and immediate preventive measures, divestment and disengagement policies.  Al-Haq further noted that the International Law Commission in its Draft Principles on the Protection of the Environment during Armed Conflict, specifically refers to the requirement for environmental due diligence in Draft Principle 21, where “an Occupying Power shall exercise due diligence to ensure that activities in the occupied territory do not cause significant harm to the environment of areas beyond the occupied territory.”

A common recommendation from all the participants, is their proposal that the legislation gives special attention to the protection and safety of human rights defenders, including those advocating for land rights and environmental justice relevant to corporate abuses, given the rising attacks they witness by states and private actors.

Al-Haq highlighted that it is important to keep in mind the relationship between Israel’s prolonged occupation and the exploitation of non-renewable and finite natural resources, recalling that unlawful exploitation and environmental destruction may amount to the war crimes.  Al-Haq recommended that the legislation include an explicit reference to the respect and protection for the environment in occupation situations in accordance with the applicable law including international humanitarian law. Al-Haq also recommended that environmental considerations are taken into account in occupied territories, which must exclusively prioritise the benefit of the protected population, and in a manner that restricts unlawful resource exploitation. The presentation ended with a recommendation to include provisions that the representatives of occupied or non-self-governing populations consent to the corporate use of their lands and natural resources.