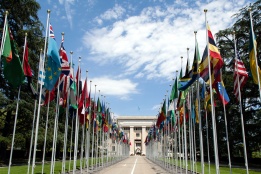 On Wednesday, 1 July 2020, Al-Haq organized a virtual diplomatic briefing on the human rights situation in the Occupied Palestinian Territory (OPT) and provided updates on recent developments regarding Israel’s de jure annexation plans, the United Nations (UN) database of businesses operating in illegal Israeli settlements (the UN Database,) the International Criminal Court (ICC.) The briefing, which targeted the diplomatic community in the OPT, including Member States of the UN Human Rights Council and UN Security Council, highlighted the urgent need for the international community to recognize the Israeli apartheid over the Palestinian people, which has been already established and continually maintained on the ground prior to the Israeli plans to de jure annex part of the West Banks. In addition, Al-Haq urged diplomatic representatives in the OPT to ensure justice and accountability and to bring an end Israel’s culture of impunity.

Opening the diplomatic briefing, Al-Haq’s General Director, Mr. Shawan Jabarin, stressed that the recently-announced Israeli plans to de jure annex parts of the occupied West Bank, which may start as early as today, is merely a result of the lack of international accountability. Protected by the culture of impunity, Israel, the Occupying Power, will endure its human rights violations rather than adhering to its legal obligations. Mr. Jabarin further remarked that Israel is analysing the response of the international community should it move further with the de jure annexation plans. As such, he welcomed the positive responses from the international community, which publicly refused Israel’s plans to annexation and incorporated the language of sanctions in their responses. That said, Mr. Jabarin stressed that Israel will move forward with its plans, only gradually, in an attempt to numb the international community. Accordingly, Mr. Jabarin stressed on the importance of adopting effective measures to hold Israel accountable and to put an end to its impunity, regardless of the form or size of the annexation.

Drawing on Mr. Jabarin’s concluding remarks, Ms. Rania Muhareb, Al-Haq’s Legal Researcher and Advocacy Officer, stressed that while Israel plans to formalize the illegal annexation of large parts of the West Bank, Area C, specifically the Jordan Valley, has been under de facto annexation since 1967. Ms. Muhareb further highlighted Israel’s illegal annexation of East Jerusalem and the Syrian Golan in 1967. In particular, Ms. Muhareb addressed the Israeli long-established policy of permanent residency for Palestinian Jerusalemites, which can be revoked at any time. She noted that such a policy only serves Israel’s apartheid regime as it aims to fragment the Palestinian people.

Ms. Muhareb further noted that in December 2019, the Committee on the Elimination of Racial Discrimination recognized, for the first time, Israeli policies and practices of racial segregation and apartheid as disproportionately impacting Palestinians on both sides of the Green Line, in violation of Article 3 of the International Convention on the Elimination of All Forms of Racial Discrimination. Building on these findings, in June 2020, 114 Palestinians, regional and international civil society organizations delivered a joint oral intervention during Item 9 of the 43rd Regular Session of the UN Human Rights Council recognizing Israel’s apartheid system. In addition, Ms. Muhareb highlighted a joint statement issued by 47 UN Special Procedures mandates holders stating that: “the morning after annexation would be the crystallisation of an already unjust reality: two peoples living in the same space, ruled by the same state, but with profoundly unequal rights. This is a vision of a 21st century apartheid.”

On the UN Database, Dr. Ania Kdair, Al-Haq’s Business and Human Rights Researcher, commended the States that welcomed the release of the Database at the Human Rights Council, and which assured the High Commissioner and Her Office of their support for the annual updates of the Database. She also reminded States of their obligation to deny public support to any businesses complicit in human rights abuses and violations, as provided by the UN Guiding principles on Business and Human Rights. Further, Dr. Kdair called upon States in which listed companies are based to take adequate steps to prevent abuses committed by the corporations domiciled within their jurisdiction and to use their domestic legal avenues to meet their obligations to stop any trade or business with the illegal settlements.

Dr. Kdair further outlined the importance of publishing and annually updating the Database, especially as we face Israeli plans to de jure annex parts of the OPT. As highlighted by Dr. Kdair, the Database is an important accountability and transparency tool, within the context of the Israeli prolonged occupation, annexation and apartheid, but also internationally, as not only the Palestinian people are affected by the lack of transparency of business activities and their supply chain responsibility for human rights impacts on the grounds. In addition, Dr. Kdair stressed on the role of the Database as another source of information on the illegality of Israeli settlement goods and services, as Israel fails to correctly label the products manufactured in illegal settlements or produced from natural resources exploited from the OPT.

Dr. Kdair further highlighted that the Database is crucial for a global recognition of many vital links between sustaining business activities in Israel’s illegal settlements and Israeli annexationist practices towards the Palestinian people. Remarked by Dr. Kdair, Israel’s illegal settlements continue to exist as flourishing hubs for Israel’s creeping annexation. Accordingly, the annual update of the Database will serve as a precedent and positive incentive for corporations ready to conduct human rights-based due diligence and risk analysis in contexts of occupation and ongoing annexation, as it is also needed to put an end to Israel’s settlement enterprise, the exploitation of Palestinian resources and to ensure transparency and accountability.

With regards to the ICC, Mr. Pearce Clancy, Al-Haq’s Legal Researcher and Advocacy Officer, reminded the diplomatic community that as we wait for the Pre-Trial Chamber ruling, Al-Haq remains in full support of the ICC and the Prosecutor, as it is a tool for needed and long-ignored accountability and justice. In that regard, Mr. Clancy addressed the continuous smear campaigns, led by Israel and its affiliated groups, against lawyers and civil society organisations cooperating and engaging with the Court on Situation in the State of Palestine. These have included death threats made against specific individuals and attempts to smear and discredit organisations and their staff. Notably, the smear campaigns are not only limited to civil society organisations, but also to victims. On 23 June 2020, Ahmad Erekat, a 27-year-old Palestinian was killed at checkpoint near Bethlehem by the Israeli Occupying Forces. Following his killing, his family was targeted with smearing attacks and collective punishment measures, including the withholding of his body.

Further highlighted by Mr. Clancy, the smear campaigns also targeted the Court, both as an institution and as individuals working therein, as threats to cut funding the Court, should such an investigation be opened, were made. Acknowledging that such campaigns have been one of the tactics widely used by Israel, Mr. Clancy noted that they will only intensify as the investigation moves further.

Mr. Clancy urged States that have yet to do so, to immediately recognise the State of Palestine, to advocate for its full membership of the UN, and to reaffirm the Palestinian right to self-determination and to affirm the national unity and territorial integrity of Palestine. Further, he called upon States to adhere to their legal obligations and commitments and to fully cooperate with and publicly support the ICC, specifically following advance to the opening of an investigation. Mr. Clancy further highlighted the need to support the independence of the Court and the integrity of the proceedings in the Situation in Palestine, and to ensure the protection of victim’s representation and NGOs working on the case.

Finally, Dr. Susan Power, the Head of Al-Haq’s Legal Research and Advocacy Department, stressed that the international community have been failing the Palestinian people since 1948, when Israel first annexed parts of Palestine, three years after the adoption of the Charter of the United Nations. She further highlighted that annexation, which is an act of aggression, is in violation of the founding principles of international law, including the equality of sovereigns. She further recalled the Nuremberg trials, in which annexation and acts of aggression were prosecuted. As such, Dr. Power reaffirmed that any inch of territory which is annexed needs a firm and strong response, as there is no room for de jure nor de facto annexation. In addition, Dr. Power stressed that failure by the international community to intervene with the necessary and comprehensive response represents a failure to respect the object and purpose of the Charter of the United Nations making it imperative for States “to take effective collective measures for the prevention and removal of threats to the peace, and for the suppression of acts of aggression or other breaches of the peace.”

Overall, Al-Haq called upon the diplomatic community and States to: