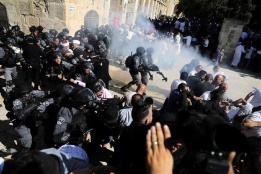 Al-Haq calls upon the international community to take immediate action to protect Palestinian freedom of worship and protect the status quo of the Al-Aqsa Mosque compound under Jordanian custody. Critically, the continuance of the status quo was reaffirmed under Article 9(2) of the 1994 Treaty of Peace Agreement between Jordan and Israel. In 2013, the Palestinian Authority entered a bilateral agreement with Jordan for Jordan’s continued protection and custodianship of the Al-Aqsa Mosque compound and other Jerusalem holy sites. However as widely reported, the Israeli Occupying Forces (IOF) and Israeli settlers have increasingly and violently stormed the compound.

On 11 August 2019, minutes after the end of prayer and the sermon for Eid Al-Adha was concluded, dozens of IOF stormed the Al-Aqsa compound through Bab Al-Magharbeh and stationed themselves at the gate. Palestinians who were marking the holiday in the Al-Aqsa compound, including men, women, children, and religious authorities, immediately gathered together in an attempt to thwart a further incursion by the IOF and settlers. The IOF proceeded to attack and disperse the Palestinians present employing sound bombs and rubber bullets, while also beating civilian worshippers with batons. The IOF also chased and beat young men in order to force them to leave the compound, while also besieging dozens of worshippers in the Al-Qebli Mosque (part of the Al-Aqsa Mosque compound), for hours. Dozens of Palestinians were injured and 8 young men were arrested. The IOF then reportedly permitted some 1,700 settlers permission to enter the Al-Aqsa compound,[1] in breach of the status quo.

On August 7, a few days prior to the Eid Al-Adha attack, the IOF also attacked and injured a Palestinian guard of the mosque while dozens of settlers stormed the Al-Aqsa Mosque compound. These incursions were followed by a statement from the Israeli Minister of Strategic Affairs, Gilad Erdan, which called for a change to the status quo to allow for Jews to pray in the compound leading to “’spatial and temporal division’ of Al-Aqsa Mosque and Haram al-Sharif.”[2] Worryingly, Israel set a dangerous precedent in 1994 by partitioning Al-Ibrahimi Mosque in Hebron, following the massacre of Palestinians by an Israeli settler. If international action is not taken, Israel will impose its plans to divide the Al-Aqsa Mosque similar to its practice in Al-Ibrahimi Mosque in Hebron.

Al-Haq notes with concern that suggestions to divide and share Al-Aqsa Mosque violates international law. Al-Haq recalls United Nations Security Council Resolution 271 on the protection of Al-Aqsa which “recognizes that any act of destruction or profanation of the Holy Places, religious buildings and sites in Jerusalem or any encouragement of, or connivance at, any such act may seriously endanger international peace and security.” Al-Haq further underlines the specific UNESCO call on Israel as Occupying Power to ensure the protection of Al-Aqṣa Mosque/Al-Ḥaram Al-Sharif, “as a Muslim holy site of worship and as an integral part of a world cultural heritage site.”

Accordingly, Al-Haq again calls on the international community to view Israel’s actions in light of its previous attacks against the Al-Aqsa compound, as well as its broader increased aggressive targeting of Palestinians in Jerusalem, and to take immediate action to protect the Palestinian population and the status quo of holy sites in the OPT.[3] Attacks against Al-Aqsa have occurred throughout Israel’s occupation, and include:

The recent Eid Al-Adha attack is a direct result of Israeli impunity and the international community’s failure to move beyond mere condemnation of Israel’s violations of the most basic human rights of the occupied Palestinian population. In addition to the illegal relocation of the United States and other embassies to Jerusalem, entrenching Israel’s annexation in violation of international law. The international community must implement sanctions against Israel and Israeli authorities must fully cooperate with the Office of the Prosecutor’s preliminary examination; and take other meaningful actions in line with their duties under international law.