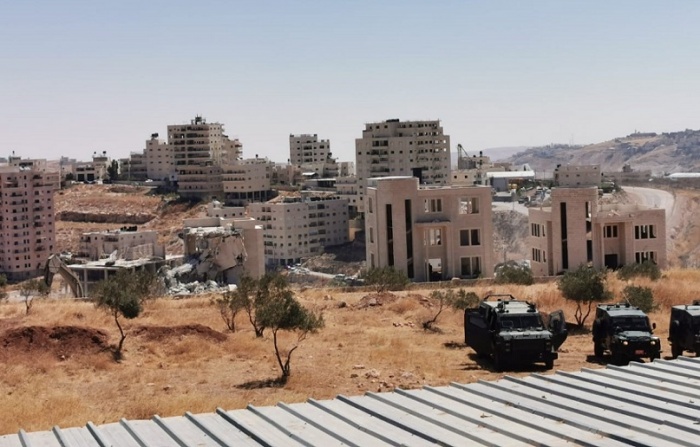 In light of Israel’s mass demolitions of Palestinian homes and property in the Wadi Al-Hummus neighbourhood, in the town of Sur Bahir, in occupied East Jerusalem since the early hours of Monday, 22 July 2019, Al-Haq sent a joint urgent appeal to four United Nations (UN) Special Procedures mandates on the ongoing and imminent demolitions carried out by the Israeli occupying authorities, stressing that the demolitions in Wadi Al-Hummus “form part of Israel’s long-term and systematic policy to forcibly uproot, displace, and dispossess Palestinians, on both sides of the Green Line, since the Nakba of 1948.”

In the joint urgent appeal, Al-Haq recalled that on 11 June 2019, the Israeli High Court of Justice dismissed the petition submitted to it by the residents of Sur Bahir and that the Israeli occupying authorities issued, on 18 June 2019, a "Notice of Intent to Demolish" to residents for ten buildings in Sur Bahir that would expire on 18 July 2019. Under this notice, residents were required to demolish their own homes by 18 July 2019 or have the Israeli occupying forces demolish their homes and be forced to pay for the costs of the demolition. On 21 July 2019, the Israeli High Court of Justice rejected an appeal from the residents of Sur Bahir, requesting an injunction to delay the execution of the judgment, and as a result, the Israeli occupying forces began carrying out the mass demolitions early the next day, on Monday, 22 July 2019.

Notably, Al-Haq stressed in its urgent appeal that "Israel's High Court of Justice has demonstrated in the case of Sur Bahir that it is neither willing nor able to prevent the commission of suspected war crimes and crimes against humanity in the OPT, including the extensive destruction of property not justified by military necessity and carried out unlawfully and wantonly as well as the forcible transfer of protected persons carried out by the Israeli occupying forces, while it in fact rules in favour of and authorises their commission."

Accordingly, Al-Haq called on the Special Procedures "to take immediate and collective action to halt the ongoing and imminent demolitions and to ensure that Palestinians whose homes have been demolished by Israel, the Occupying Power, are ensured effective remedies". In particular, Al-Haq urged the UN Special Procedures to issue a public call on Israel, the Occupying Power, to halt the ongoing and imminent mass demolitions in Wadi Al-Hummus and refrain from forcibly displacing the residents of the area, to highlight the urgent need for accountability, including by calling on the International Criminal Court to immediately open an investigation into the situation in Palestine, and to call on third States to cooperate to bring to an end grave breaches of international law committed in the OPT, including as a result of the ongoing construction and expansion of the Annexation Wall and illegal Israeli settlements.

In addition, Al-Haq highlighted the involvement of corporations, such as Caterpillar and LiuGong, in Israel's policy of house and property demolitions across the OPT, including those being carried out in Wadi Al-Hummus and called on the UN Special Procedures to remind corporations of their responsibilities under international law to carry out enhanced due diligence when operating in the OPT and/or when providing services, products, and machinery to Israel, the Occupying Power, to ensure that they are not involved or complicit in grave breaches of international law committed in the OPT.

In light of the above, Al-Haq calls for international action to end the mass demolitions in the Wadi Al-Hummus neighbourhood in Sur Bahir and elsewhere in the OPT and to ensure perpetrators of international crimes are finally held to account. It is time for the international community to make clear that it will no longer turn a blind eye to Israel's suspected war crimes and crimes against humanity. Despite overwhelming evidence and a reasonable basis to believe international crimes are being committed in the OPT, the International Criminal Court is yet to open an investigation into the situation in Palestine. The delays in opening an investigation are unjustified and lead to the accelerated continuation of grave breaches in the OPT, while Israeli impunity prevails under the watchful eye of the international community.