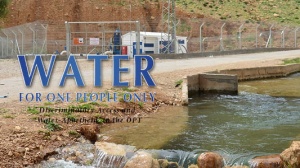 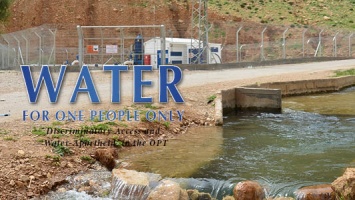 Al-Haq is pleased to announce the publication of its study “Water For One People Only: Discriminatory Access and ‘Water-Apartheid’ in the Occupied Palestinian Territory,” which finds that Israel’s policies and practices in relation to water in the Occupied Palestinian Territory (OPT) amount to a system of ‘water-apartheid.’ The threshold for apartheid is met because the inhuman acts, committed against Palestinians through the denial of access to water in the OPT, are carried out systematically in the context of an institutionalised regime with the intent of establishing and maintaining Jewish-Israeli domination over Palestinians as a group.

While the Oslo Accords intended for greater access to the water resources in the OPT, Palestinians have less and less access to their natural resources today. Indeed, Palestinians have seen their access to water reduced from 118 million cubic meter (mcm) per year as promised by Oslo II to 98 mcm per year in 2010 – a decrease of almost 20 per cent. In the same period, the number of Israeli settlers in the OPT has risen to more than half a million, who consume more than 6 times the amount of water allocated for domestic purposes to 2.6 million Palestinians in the West Bank. This discrepancy is even greater when water for agricultural purposes is taken into account. While the recharge area of the Mountain Aquifer is largely located in the West Bank, Israeli extractions amount to 89 per cent of the water resources, which are subsequently allocated to those residing in Israel and in Israeli settlements. As a result, Palestinians are forced to rely on Israel’s national water company, ‘Mekorot’ to meet at least one third of their domestic water needs, making ‘Mekorot’ the single largest supplier in the West Bank.

Commenting on the study, Shawan Jabarin, General Director of Al-Haq said: “Not only does Israel continue to profit economically from the occupation of the OPT, but it has imposed a system of ‘water-apartheid’ in order to do so. It is a practice that subjugates the Palestinian population and ensures that the only development we see inside the OPT is that of settlements and settlement farms.”

In seeking to paralyse the development of Palestinian water infrastructure, Israel has actively prevented the construction and maintenance of water systems and networks in the OPT. This has primarily been achieved through Israel’s illegal regime of closures imposed on the Gaza Strip and the systematic denial of permits for any construction or rehabilitation of water infrastructure in the West Bank. Any water structure built without a permit from the Israeli authorities – permits that are virtually impossible to obtain – risks demolition, regardless of whether they are funded by the international community of donors. The humanitarian and development agencies that operate in the OPT could play an important role in exerting pressure upon Israel to halt its illegal practices of extensive destruction of Palestinian water infrastructure. To structurally improve Palestinians’ access to water, these agencies should systematically challenge Israel’s discriminatory permit regime by refusing to cooperate with it, and by pursuing development projects without permits as these are part and parcel of Israel’s violations of international legal obligations.

Israel’s policies and practices with regard to water sources in the OPT violate peremptory norms of international law, including the right to self-determination and the prohibition of extensive destruction and appropriation of property, as well as constituting breaches of the international legal prohibitions of colonialism and apartheid. In light of their serious violations of international law committed in the OPT, the Israeli authorities are called on to halt these illegal policies and to guarantee Palestinians the exercise of their sovereign rights, including permanent sovereignty over natural resources.

In order to ensure that Palestinians can exercise their full rights in the OPT, the access to, use and allocation of shared water resources must not be determined on the basis of one side’s dominant negotiating power over the other, but must strictly abide by international legal norms.