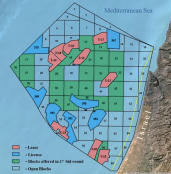 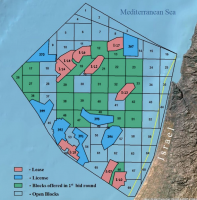 On 4 November 2018, the Israeli Ministry of Energy announced that the second bidding round for oil and gas exploration licenses will soon be opened to “all the Israeli EEZ area”, including an area of the Mediterranean Sea encompassing disputed waters bordering Palestine, which have not yet been settled by a delimitation agreement between Israel and the State of Palestine.[1]

Last year, in the first round, Israel opened 26 blocks to tender, four of which lie in disputed waters off the coast of the Gaza Strip (Blocks 26, 27, 36 and 66). Israeli Minster of Energy, Dr Yuval Steinitz stated that the "bid round is the first step in a long-term process that would lead to full exploitation of gas and oil resources in the Israeli EEZ for the benefit of the Israeli citizens”.[2] However, Palestinians have the right to self-determination, which encompasses permanent sovereignty over natural resources in the Palestinian continental shelf, including contiguous natural gas resources, and also potential claims to other natural resources in the disputed waters.

The licenses represent a further attempt to alter, the facts of the sea, in order to create a massive expanded EEZ for Israel. Meanwhile, Israel militarily prevents Palestinians  from establishing and accessing the sea and exploiting  substantial gas reserves, such as the Gaza Marine and Border Field, and other unexplored potential gas fields in the high seas, through the imposition of a military closure and so-called ‘naval blockade’, which gravely impacts the civilian population in the Gaza Strip.

Notably, most countries abstained from bidding on the disputed Palestinian-Israeli waters when the leases went for tender last year. Instead, only five exploration licenses were granted to Energean (Blocks 12, 21, 22, 23 and 31), a Greek oil and gas company, and a consortium of companies from India; ONGC Videsh, Bharat PetroResources, Indian Oil Corp and Oil India who were leased Block 32.[3] On 4 November 2018, it was reported that Israel planned to further auction 19 offshore blocks.

Al-Haq warns third States and international companies seeking to do business in contiguous waters off the Gaza/Israeli coast, that they are operating in disputed waters. Furthermore, companies operating in conflict-affected areas are obligated to apply enhanced due diligence.[4] Significantly, Israel militarily controls the waters off the Gaza coast,  under a declared “naval blockade”,[5] an area in which there is active armed conflict. Additionally, when extracting gas offshore Israel, companies must also ensure that human rights are not violated further along the supply chain. This issue becomes critical where gas is exported from Israel in pipelines, traversing parts of the Palestinian sea militarily held under “naval blockade” to third countries. Critically, the killing of Palestinian civilian fishermen and collectively punishing about two million in Gaza to secure gas infrastructures may amount to grave breaches of international law, for which there is individual criminal liability.

[4] Statement on the implications of the Guiding Principles on Business and Human Rights in the context of Israeli settlements in the Occupied Palestinian Territory, Mandate of the Working Group on the issue of human rights and transnational corporations and other business enterprises, 6 June 2014, p.9